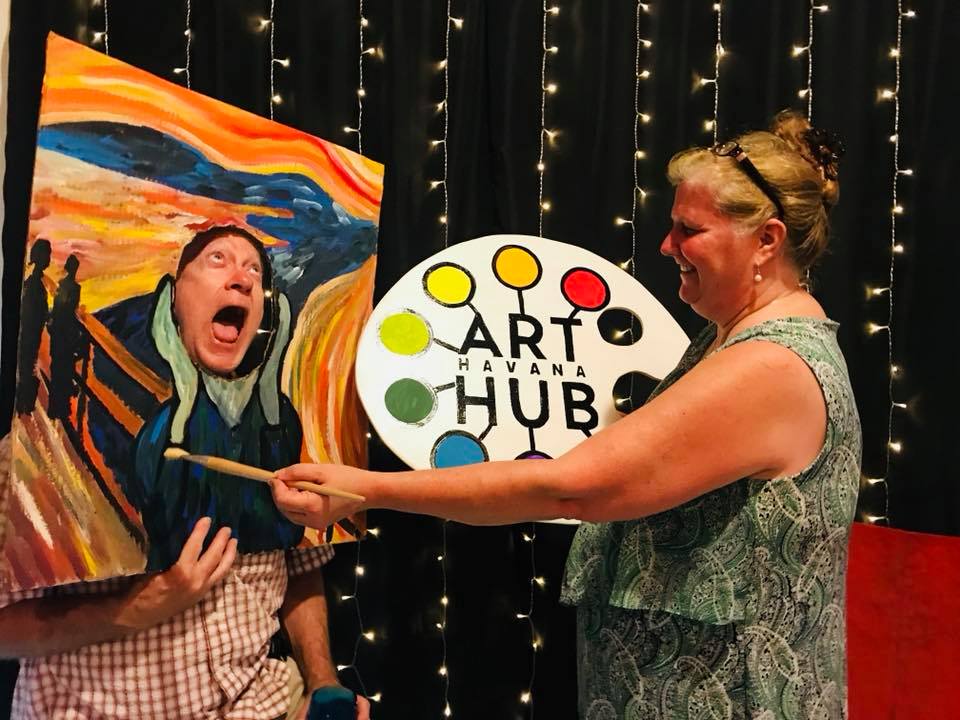 Nestled next to Wanderings and Poppy’s in downtown Havana is The Art Hub – with its brightly painted double door and display of interesting artwork. Proprietress Danielle Henn has been open since May.

Henn grew up in Havana and took art classes as a child from D. Arthur McBride, as well as Lee Manella, a well-known Havana artist. Manella envisioned the “Florida Arts Trail,” the markers for which still line Gadsden County roads. Sadly, however, he died before fulfilling this dream. Mainstreet Havana and The Art Hub may be a beginning for Havana’s contribution to the Arts Trail.

Henn was on the Mainstreet mural committee and painted the Old Spanish Trail mural on the outer wall of the Havana Shell station, as well as the massive mural inside the Havana History and Heritage Society’s Shade Tobacco Museum. Henn’s husband, Nick, is also well-known as the executive director of the Quincy Music Theater. They have a two year old daughter.

Originally, Henn planned to use The Art Hub space as a private art studio while she worked on her doctorate in art education. But the community had other ideas, as local artists and aspiring artists quickly began flocking to her door, asking about classes, projects, story times and more.

“The place took on a life of its own,” Henn recalls, “but it culminated in The Hub becoming a place where we can offer classes, where creative people can get together to work on projects and can share their work. There is a lot of talent in our area, and the arts encourage all cultural populations to interact. This is something I’m eager to pursue.”

Currently, the HUB is open for private parties, classes and workshops. At “paint parties” artists pay a fee and The Hub provides canvas, materials, wine and the subject, which they all paint. The unique “paint parties” have quickly gained a reputation for being “a good time for all.”

Beyond visual art, on the third Saturday of every month, Art Hub hosts an open mic night. Leisha Dillard is the hostess for the open mic event and will start a class in September for those wanting to practice public speaking and improvisational performance. Dilliard performed stand-up comedy routines in New York City.

After Labor Day, the Hub will have regular programming and will release a schedule outline events and programs. The Hub hopes to have musical acts, poetry readings and more – including a collaborative quilt project by Havana women, also the culmination of Henn’s doctoral dissertation. So if you’re a quilter, sign up!