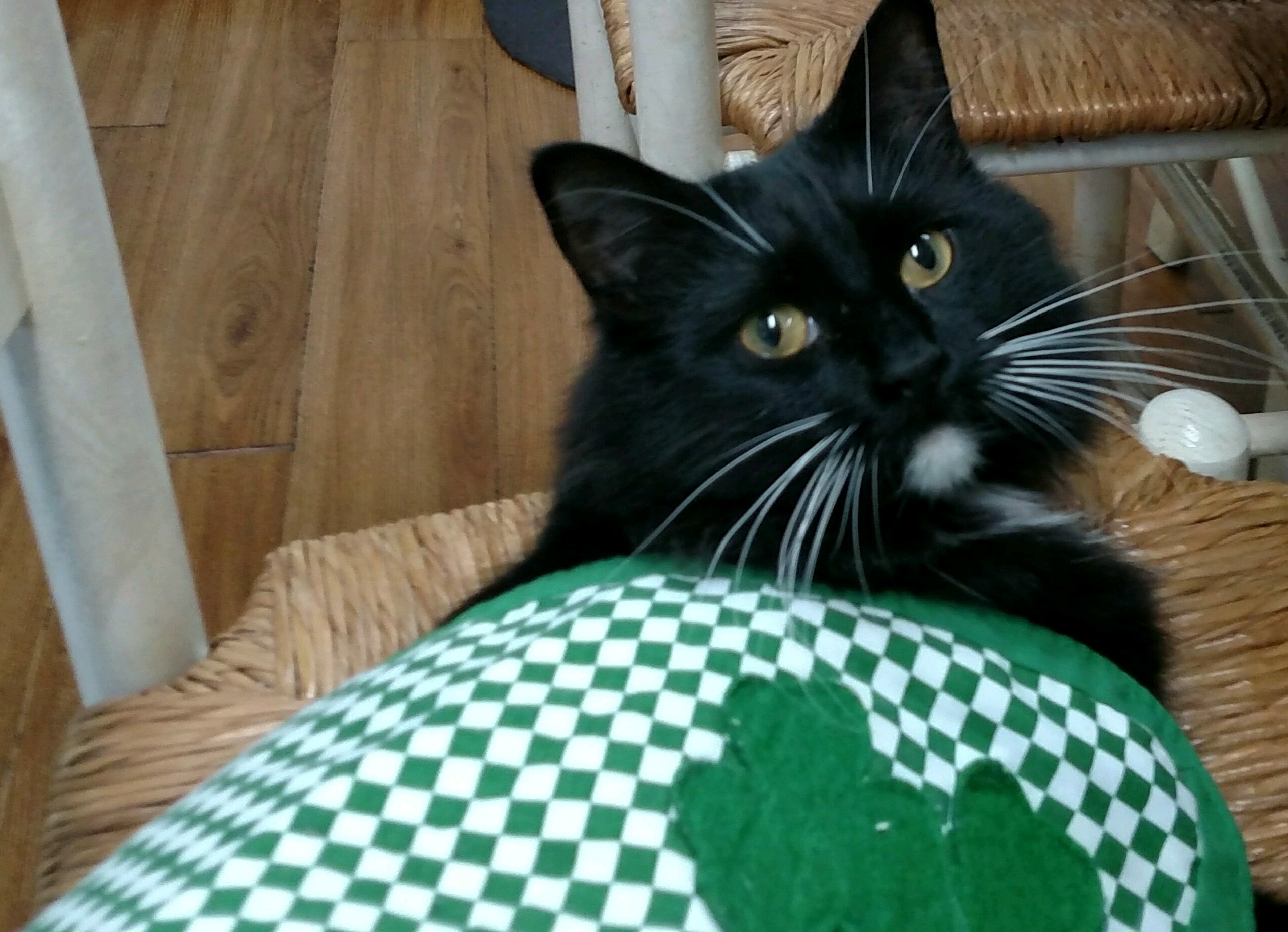 Beebe has taken up dancing.

Whatever music comes on the radio, he leaps up on his hind legs and awkwardly hops around. It doesn’t last long before he falls over, but it is definitely cute.

Thinking he is probably trying to avoid being a one-trick pony with his Roly-Poly act, I cheer and applaud.

Then some Irish music comes on and he goes crazy with his dancing. I finally realize he’s practicing an Irish jig for St. Patrick’s Day.

There also were other clues.

I have a shopping bag with shamrocks all over it and he has taken it over as his favorite sleeping bag.

He has begun playing with the Mardi Gras beads, which he found in a large glass bowl on the porch. That was also cute, but I noticed he only played with the green ones.

He dragged out his St. Patty’s Day stove pipe hat from his costume box, but he had chewed the brim when he was a kitten and had also broken the strap that held it on his head.

He carried it to me crying pathetically, wanting me to put it on him, but there was no way it would stay.

He didn’t give up. He found his old elf costume with the little green-and-white striped vest, but Beebe has gained weight and it wouldn’t fit.

Since he is sensitive about his weight, this was the last straw. He crawled into his shopping bag and yowled.

Being a good cat mom, I tried to comfort him.

“It’s okay, Beebe,” I said. “You are not Irish so you don’t need to worry about all these customs. I will get you a green collar and you will be fine.”

Obviously, this was not the right conversation to have with him. He went into a fury, beating his chest with his paws, then retrieving a tiny Irish flag which he dropped at my feet.

Up on his toes he went, doing his version of the Irish jig until he fell in a heap. I know I’m dense but I finally got the message. Beebe believes he is Irish and wants to celebrate this special Irish day.

Since Beebe is adopted, like many adoptees he is always wondering about his true heritage.

I remember that one other time he was convinced he was the Easter bunny and began hiding plastic eggs in his litter box, but that’s another story.

I decide education is the answer. We get out the Cat Encyclopedia and look for Irish cats. We find cats from all over the world but none specifically originating in Ireland.

I think hard. I could get his DNA tested, but I’m sure it is a waste of money. He doesn’t even have green eyes.

I decide on a different course of action.

We will decorate our home and ourselves completely for the great day.

“Keep practicing your dancing,” I tell Beebe. “On March 17, everyone is Irish. We will have corned beef and green milk. We will dance the jig together. We will be Irish for the day.”

Beebe purrs and walks over and presses his nose against the stone doorstop. Did he just kiss the blarney stone? Maybe he is Irish. I’m sending for that DNA kit.