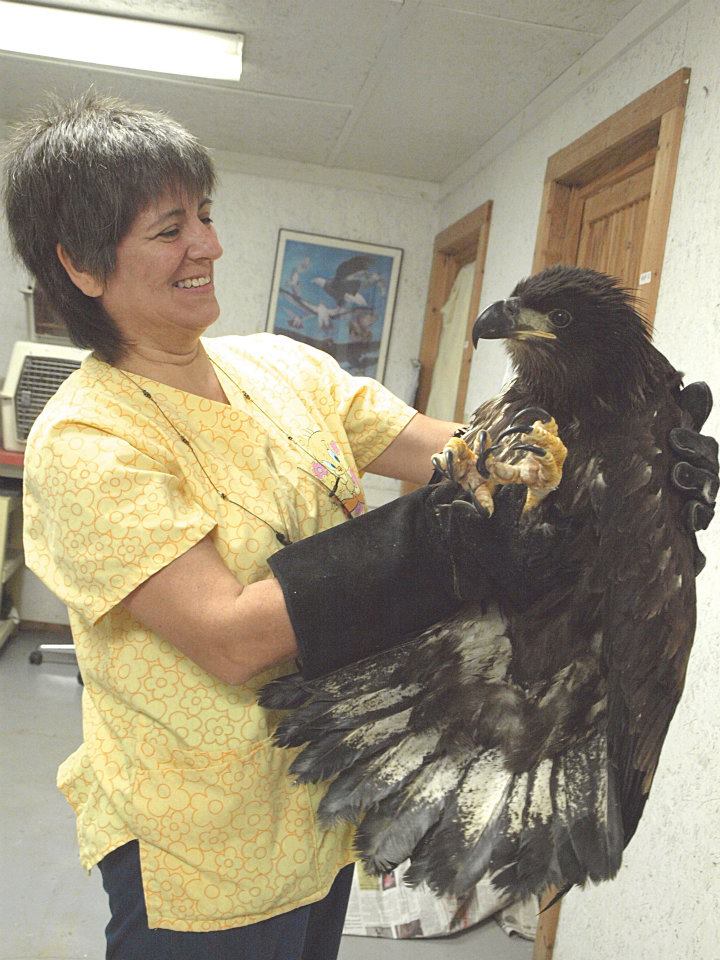 For the past 10 years she has lived in Quincy and has worked at St. Francis Wildlife Association, a local nonprofit that cares for and rehabilitates orphaned, injured and sick wildlife at a special hospital facility near Havana. There she serves as director and rehabilitator.

Stevenson has no human children, but she claims the more than 3,000 annual wildlife patients at the hospital as her “children.” She is dedicated to the care of these “children” and works tirelessly to ensure they receive the best care possible so they can be returned to the wild.

“The procedure on release depends on the species,” Stevenson explains. “Some must be returned to exactly where they were found. Turtles and raptors are in this group. They have territories and families and need to be returned there. Other species, such as squirrels and bunnies, can be returned anywhere that has the proper environment.”

In one issue of the St. Francis Wildlife Association newsletter, “Wildlife Matters,” Stevenson describes how release does not always go as planned. She describes the release of two baby raccoons. One scrambled up a tree and was fine. The other scrambled up and chose the tiniest branch possible to climb on. Realizing he was in trouble, Stevenson placed herself beneath that spot and caught him as he fell into her arms. The animal seemed surprised, but when placed on the ground made a second successful ascent.

“My job is full of surprises,” Stevenson says.

St. Francis education director Sandy Beck couldn’t say enough kind words about Stevenson. “We are so fortunate to have her, because she puts the animals’ welfare above her own. She is the best director and rehabilitator we’ve ever had,” said Beck, who has worked at St. Francis Wildlife for nearly 30 years.

What made you choose this unusual career?
As a biologist, I was always interested in animals. When I lived in Fort Lauderdale, I found a baby mockingbird. I cared for it myself for a few days. Then I heard of a rehab center and took it there. Once I saw what they were doing, I was hooked. I knew this was what I wanted to do. I began to volunteer and 20 years later, I am still caring for wildlife.

What kind of training did you have for your present job?
Well, I received a bachelor’s degree in biology in Mexico. There was no formal education to be a rehabilitator or care technician. You learned by being a volunteer. Today, you can attend symposiums and classes through the National and Florida wildlife associations, but most education still comes through volunteer experience.

What types of caregivers are at St. Francis?
There are animal care technicians, interns and volunteers. The staff has the most experience but all do the same duties, including me. It is not a glamorous job. Doing the laundry and cleaning cages takes most of the time, as well as preparing meals. We spend a lot of time cleaning up waste. No, it certainly isn’t glamorous.

What is the weirdest animal you’ve taken in at the rehab center?
I think it was a butterfly. Someone found a butterfly stuck to their windshield. They brought it to us, and I thought, ‘What am I going to do with a butterfly?’ We put it on a slice of watermelon, and a few hours later it flew away.

What is the most difficult part of your job?
When one of the animals doesn’t make it, it is very, very hard. Even so, we know they have not lived in vain. They have touched someone’s heart – the person who found them and we, who have cared for them.

What is the most rewarding part of your job?
Releasing them, of course. When they run away or fly off, it means we did our job well.

What do you think would be the biggest help Gadsden County residents could do for wildlife?
There are so many. Keep housecats indoors, dispose of garbage properly, pick up fishing line, don’t use pesticides, volunteer at the wildlife hospital, and provide items on the wish list at stfranciswildlife.org. Also, remove dead animals from the road so that scavengers don’t become secondary victims. Most important, enjoy the animals. We live in Florida, and they’re a large part of what makes Florida so beautiful.