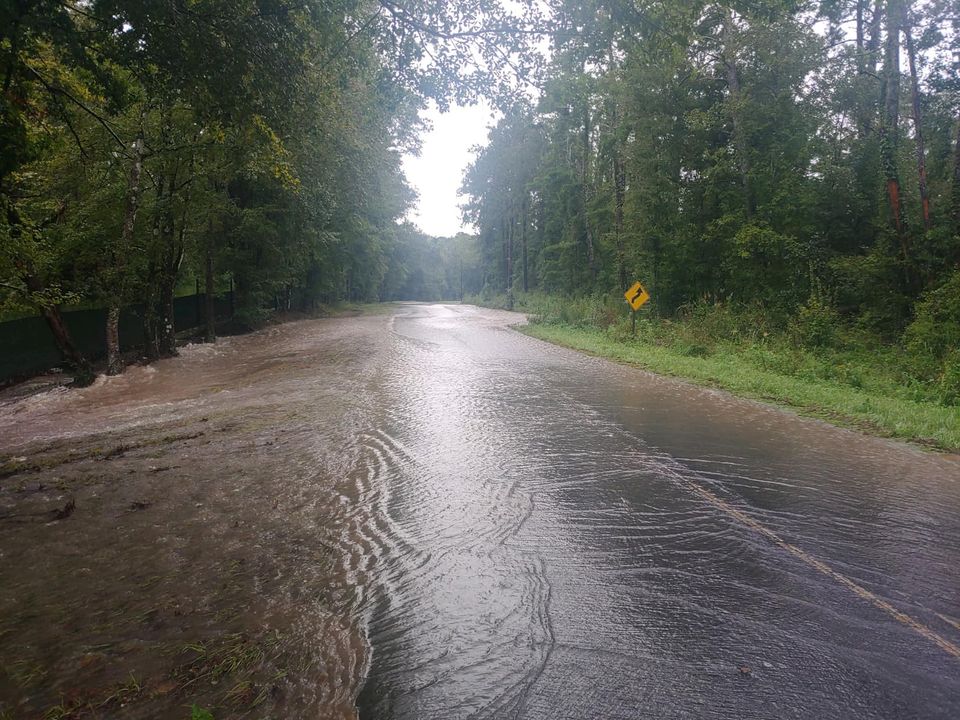 When Sherman Curry bought a Quincy home on Flagler Street in 2015, he was told by the previous owner that the neighborhood was frequently flooded – but Curry says he had no idea the level of flooding that would take place, until 2019.

In August of 2019, Curry says a storm rolled through Gadsden County that resulted in extreme flooding of the Flagler Street neighborhood, an area known locally as “Lake Skillet”.

“The whole street flooded,” says Curry, and he says that after that flooding took place, there was some effort on the City of Quincy’s behalf in order to prevent further floods from taking place.

Since the August 2019 flooding, there wasn’t another heavy storm to put the City of Quincy’s improvements to the test, until Hurricane Sally on September 16, 2020.

“It was the same situation as before,” says Curry.

Curry estimates that a minimum of 8-10 homes on the street were involved in the September flooding.

Curry says his property did not take on any water, but other homes on the street did not fare so well.

Melinda Jackson grew up on Flagler Street and still lives in her renovated childhood home – a home that has needed thousands of dollars in repairs in damages from ongoing flood-issues in the neighborhood.

“This house means so much to me. It is hard to leave, but it is heart wrenching to have to make repairs from where it floods again and again,” says Jackson.

The first time she can remember Flagler Street flooding, Jackson says she was around 13-14 years old in the mid 1990s.

“It rained a downpour one night, and I remember waking up the next morning to sloshing sounds,” she says. “My father was yelling at us kids to not get out of bed.”

Jackson says that she remembers looking over the side of her bed and seeing standing water, a foot deep, in her bedroom and her family was concerned about electrical currents in the water. She says her father had to carefully make his way over to the house’s breaker box and turn off their home’s electricity before anyone could get out of bed.

“It was very, very traumatic,” she says.

The flooding would continue to be a problem in their home, as Jackson says she can recall an additional 15 times that her family’s home has flooded since that first occurrence.

“Whenever we would have a torrential downpour, our home would take on water,” says Jackson, adding that each time it happened, they received empty promises from city officials, all saying the problem would be fixed.

This time, Jackson says that her home took on about 6-8 inches of rain-water during Hurricane Sally.

Each time her home floods, Jackson says that she and her husband have to personally pay thousands of dollars in order to repair the damage created by the excessive water.

“The last flood in 2019 cost us about $20,000 to fix,” says Jackson, and she estimates that the damage created by this month’s flood will generate an even heftier bill.

Jackson lists off the various aspects of her home that were damaged during the September flood: doors that won’t shut, tile flooring that is no longer solid, kitchen cabinets that will rot, baseboards that are warped and cracked, and ruined furniture.

Jackson also runs her own business out of her home, and says that the recent flooding in her home damaged a big portion of her business inventory, putting her livelihood at risk.

Jackson estimates that her family is looking at around $50,000 in repairs.

“It has been devastating. The thing people don’t understand is that we do not live in a flood zone, so we don’t get flood insurance,” says Jackson. “People assume home insurance will pay for repairs, but because it is water from an outside source, we can’t get our home insurance to pay for it. So each time this happens, we have to break the piggy bank to make our repairs.”

Jackson and her husband have invested thousands of their own dollars in repairing their home, and Jackson says her pleas to the city have gone, mostly, unanswered.

“The city is not assisting me in any way,” says Jackson. “They told me I could go to a hotel, at my own expense, and they would reimburse me sometime in the future. It just felt patronizing.”

Jackson also shares that the city did not offer sandbags to the residents on Flagler Street until after the flood damage had already been done.

“They provided sandbags after the rain had already stopped. I’m sloshing water out of my house and they walk up with sandbags,” says Jackson. “I had to smile to keep from crying – because what was I going to do with sandbags now?”

Melinda Jackson is not the only Flagler Street resident to be experiencing difficulties as a result of the unanswered flood problem.

One of her neighbors, Helen Jackson, says that while her home didn’t flood indoors during the September flood, it did come up to her porch’s front step.

“It was as if there was a river in my yard. It ruined everything I had in my yard,” says Helen Jackson.

While she did suffer some damages, Helen Jackson says the biggest strain has been the mental and emotional impact the floods have taken on her family.

“It’s been very stressful. You’re afraid when it rains. Rain is supposed to be a calming thing, because you get to relax and sleep well. But in our case, when it rains we stay awake all night, afraid and praying that the water won’t come into our house,” says Jackson. “You work all your life to pay for this house, only to have this happen.”

Helen Jackson has lived in her Flagler Street home for over 20 years, and says she the floods have been an issue the whole time.

“The city has tried to fix the problem. I don’t know what they need to do, but something has to be done,” says Jackson. “Our houses are still flooding.”

When The Herald reached out to the City of Quincy, City Manager Jack McLean responded, saying that Flagler Street wasn’t the only area of Quincy to flood during the September storm.

McLean says there are around 8-12 spots within the city with flooding issues and Flagler is no special exception.

“When we have heavy rains for several hours, all of those areas flood. There’s just too much water for that area,” adds McLean. “There’s flooding on 13th Street and near Burma Height…it’s all over town. They aren’t the only place flooding.”

McLean did say the flooding on Flagler (and surrounding streets) is a problem the City of Quincy has already identified and further development of homes in the area has potentially furthered the problem.

“I don’t know what else we could’ve done. I remember offering shelter, pumping water out of yards and investing money to mitigate the problem,” says McLean. “Our facilities did what they had to do. I would like people to appreciate that God works His will and there’s only so much we can do.”

City Manager McLean adds that in recent years, the city has invested over $70,000 in improvements to the area to prevent flooding – but future improvements could cost up to $2 million.

“We just don’t have those sort of resources,” says McLean. “I’m sure the [city] commission will look at the problems of flooding. We will continue to address it and work to improve that area.”

According to a report from the City of Quincy, the city received a total of 5-6 inches of rainfall during the Hurricane Sally storm.

In order to repair all of the damaged streets and stormwater facilities owned by the city, McLean is anticipating a preliminary repair cost of $85,000.

“What can we do, moving forward, to keep water out of people’s homes?” asks Curry. “I feel like the city can find a solution. I’m looking for a solution. This shouldn’t happen again.”

Published in Community, Government and Quincy