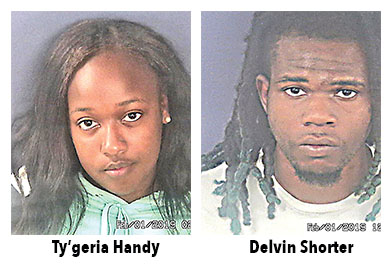 An 18-year-old woman and 25-year-old man are behind bars on attempted homicide charges after police say they rode through a Quincy neighborhood firing gunshots at an individual over comments made on Facebook and sent via text message, a probable cause affidavit states.

The alleged shooter, 25-year-old Delvin Shorter of Quincy, is charged with attempted first-degree murder and shooting into or within a building, according to court records. The alleged driver, Ty’Geria Handy, is charged with attempted homicide, according to a Quincy Police Department news release. Shorter is also facing misdemeanor cannabis possession charges unrelated to the shooting incident, court records indicate.

Both are being held at the Gadsden County Jail without bond.

“You better think twice before you pick up a gun and shoot at someone in Quincy,” Quincy Police Chief Glenn Sapp cautioned. “We will use everything we have to find you and hold you accountable. And when we find you you are not going to like where you’re going to be headed.”

Neither the intended victim, Ryan Farlin, nor any bystanders were injured in the volley of gunfire, but a witness told police at least one round “almost hit” an infant on scene, court documents state.

At around 3:08 p.m., Tuesday, January 15, Quincy Police were dispatched to the 1700 block of Lucky Street in reference to shots fired. Upon arrival, a witness told police she saw Shorter shooting a handgun toward her home while fleeing the scene in a silver Toyota Camry driven by Handy, a probable cause narrative states. The witness then presented police with a mugshot of Shorter from a previous arrest posted on the Gadsden County Jail’s inmate search website.

Police secured the scene and began scouring the area for evidence and interviewing witnesses. Quincy Police Investigator S. Boyd found 20 9mm shell casings scattered beside the roadway and near a Lucky Street residence, as well as a metal projectile impaled in the tire of a vehicle parked in front of the house, he states in a report.

Shorter’s alleged target, Farlin, told investigators he had been engaged in a verbal conflict with Shorter via text message and Facebook. Shorter had recently text messaged Farlin, “You got pressure,” which, according to police, is slang for “do you want to fight?” or “do you have beef with me?”

The conflict reportedly arose over a profanity-laden insult that Farlin allegedly said about Shorter, court documents state. Handy apparently reported the insult to Shorter, prompting Shorter to send threatening messages and words of provocation to Farlin via text message and Facebook, police reported.

The conflict allegedly boiled over January 15, when Shorter began shouting at Ryan from outside his parked car on Lucky Street, Farlin told police. “Hey, Ryan!” Shorter yelled from the parked car, with Handy in the driver seat, court documents state. Farlin told police he responded with a simple, “Yeah?” After which Shorter fired a round from a handgun in Farlin’s direction, hitting a nearby tree, the police narrative continues. “Oh s—t, this man is shooting!” Farlin exclaimed, before taking cover inside a house, police reported. Farlin told police that Shorter then fired multiple gunshots in his direction and left the area in the vehicle driven by Handy. Believing the incident to be over, Farlin didn’t bother to call police, he said in a police interview.

But around 3 p.m., Shorter and Handy returned, along with “some other individuals” in a white vehicle, Farlin reported. The unnamed individuals then allegedly approached the residence Farlin was in and asked Farlin “what was going on” between him and Shorter, to which Farlin replied, “Delvin [Shorter] was shooting at me. That’s what was going on,” court documents state.

Shorter, shouting from down the street, then tried to goad Farlin into a physical confrontation at the intersection of Inlet and Caldwell streets, where Shorter was posted at the time, Farlin told police. Farlin started to walk in Shorter’s direction, but two acquaintances on scene pleaded with him, “Please don’t go,” so Farlon opted to remain at his current position, he continued in the police interview.

Handy then allegedly drove north on Caldwell Street with an unknown male in the front passenger seat and Shorter hanging out of the rear passenger window shouting, “Yeah,” court documents state. Shorter and the unknown male then began firing shots in Farlin’s direction, prompting Farlin and bystanders to take cover inside the residence, the police narrative continues.

“Everyone scattered and ran inside the house,” a witness told police, echoing Farlin’s account. The witness added that one of the rounds nearly struck an infant child on scene,” court documents state.

Interviews with additional witnesses, including a contractor working at a nearby house, appeared to confirm Farlin’s account, police said. None of the witnesses could identify the unnamed shooter in the passenger seat, according to court documents.

Warrants for Shorter and Handy’s arrest were issued, but police were initially unable to locate either party. Police eventually tracked down both suspects and booked them into the Gadsden County Jail this past Friday, February 1, jail records indicate.

Anyone with information about this or any other crime is urged to call Quincy Police Captain Robert Mixson at (850) 627-0138.