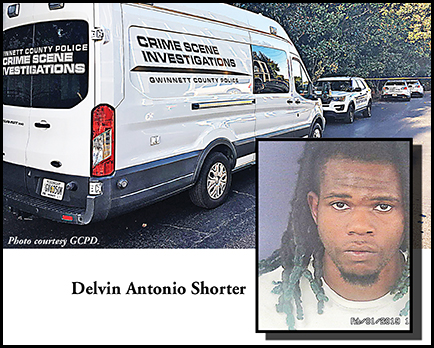 Just before 4 a.m., this past Thursday, October 17, a passerby reportedly spotted two bodies lying in a second-floor room at the Norcross Inn – an extended stay motel in the Atlanta suburb of Norcross – and called 911 to report “suspicious activity,”  a spokesperson for the Gwinnett County (Georgia) Police Department said. Crime scene investigators responded shortly thereafter and the following day – this past Friday – Gwinnett County police identified the two deceased individuals as Lacresha Jalyn Day, 24, of Seffer, Florida, and Delvin Antonio Shorter, 26, of Quincy. Both were killed by a gunshot wound to the head, and Shorter has been fingered as the shooter, Gwinnett County police said.

Authorities initially investigated the case as a double homicide, until evidence eventually pointed to a murder-suicide, police added. A spokesperson for the Gwinnett County Police Department declined to divulge any further information – including motive and the nature of the deceased’s relationship – citing the case’s status as an “ongoing investigation.”

According to the National Gun Violence Memorial, Day – known to friends and family as “Cree-Cree” – was the mother of two daughters. The families of both Day and Shorter were notified of the incident shortly after the bodies were identified, Gwinnett police said.

In February 2019, Quincy police arrested Shorter on charges of first-degree attempted murder and several other felonies related to a January drive-by shooting in a Quincy neighborhood. Also arrested in the case was 18-year-old Ty’Geria Handy of Quincy, the alleged driver in the shooting, according to police. Authorities reported that on January 15, 2019, Shorter fired a volley of rounds toward several individuals standing outside a house on Lucky Street. No one was injured in the alleged shooting, but witnesses reported several bystanders – including a child – were “almost hit” by the chaotic gunfire.

The potentially lethal incident was reportedly sparked in large part by a dispute on popular online social media platform Facebook. The row eventually spilled out of cyberspace and onto the streets, with a verbal confrontation between Shorter and the other parties erupting on January 15, setting off a rapid chain of events leading to the drive-by shooting, police reported.

Following his arrest, Shorter pled not guilty to all charges and spent several months behind bars until April 11, when he was released from the Gadsden County Jail on bond, according to court records. Shorter was still awaiting trial as of this past Thursday, when the alleged murder-suicide occured; he was due back in court October 30 for case management, court records state.

Deveron Brown, Shorter’s public defender in the Quincy attempted murder case, could not be reached for comment by press time this past Tuesday. Handy – the other defendant in the drive-by shooting case – remains behind bars on attempted first-degree murder charges; her next court date is October 29, when she is due for a hearing, court records state.