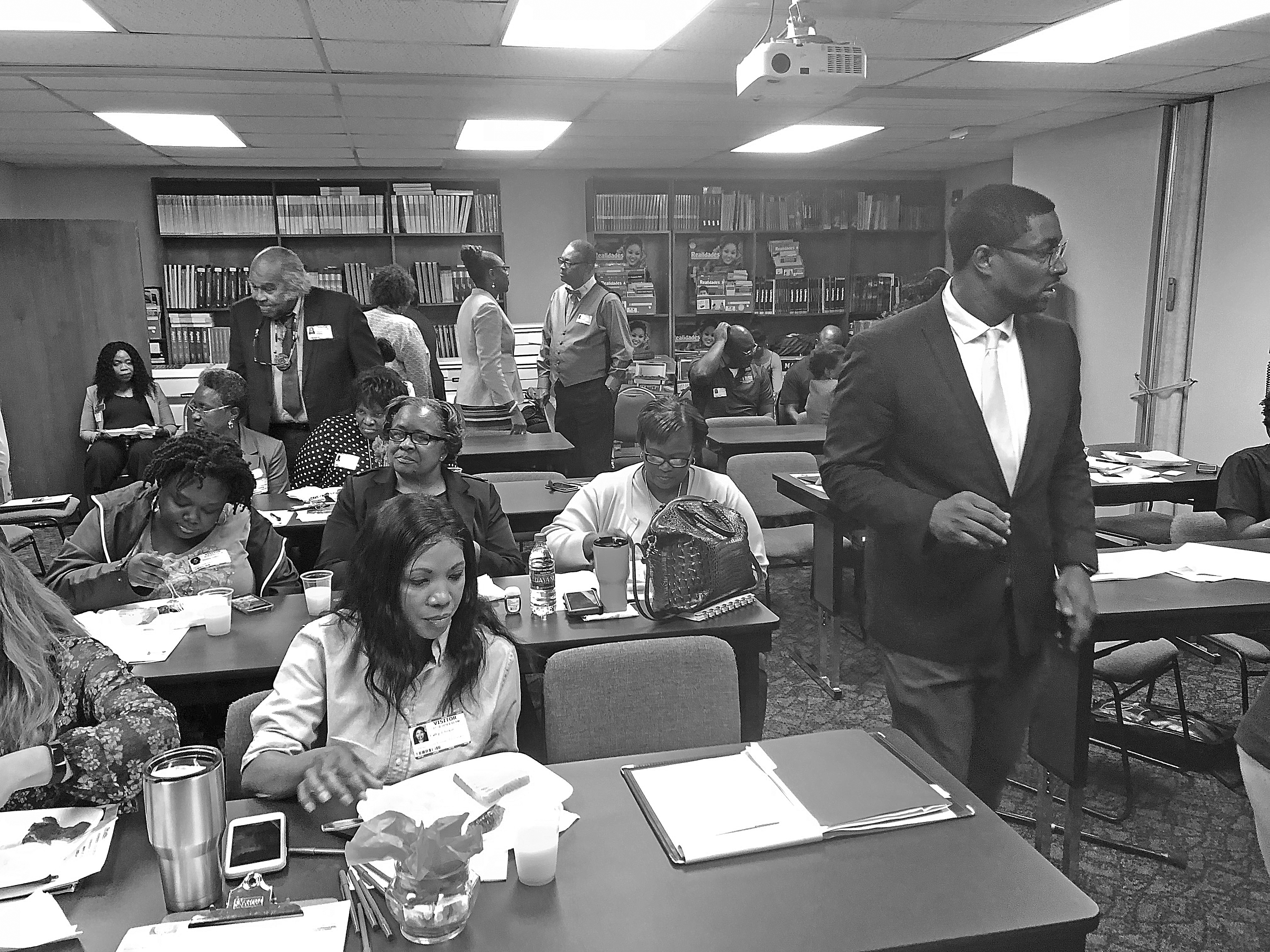 The School Board of Gadsden County’s Homeless Education Program held a Collaborative Partners’ Meeting at the end of March with the hopes of bringing the resources of organizations from across the county into one consolidated strategy to combat homelessness.

The meeting, which was led by Sherrie Taylor, the school board’s parent services coordinator as well as a county commissioner, was attended by more than 50 representatives of Gadsden County’s educational, health and business organizations — as well as a representative of Congressman Al Lawson.

“The idea is to connect people with these different services so that we can combat homelessness here in the county,” Taylor said. “There’s a smorgasbord of organizations that are here today. We want to use what resources they have to share with the community that’s experiencing homelessness.”

“So these people that are experiencing homelessness need all kinds of services and we need to make sure that they can get them regardless of their situation. In order to do that we need to know what’s available in our community.”

The meeting doubled as both an opportunity for the organization to network and to educate the community on the issue of homelessness.

An informational speech was given by Skip Forsyth, director of the Homeless Education Program for the Florida Department of Education.

“They need to be familiar with what’s going on,” Taylor said. “The more that they know, the more they can talk and share, the more people come into the fold and begin to help. We can’t do it by ourselves. We can take ministers, program directors, representatives from Congress and health administrator and pool their resources and now you have a better fit to help meet some of the needs of the homeless population.”

One point of interest was explaining how and why some people become homeless.

“It happens every day,” Taylor said. “You have drug issues, you have fires, you have loss of income, there’s just a smorgasbord of reasons as to why people get into that situation. It’s happening every day, and if we have one family that’s experiencing homelessness, that’s one family too many.”

Another point focused on was establishing a more accurate definition of homelessness.

“A lot of folks think of homeless people as someone who’s living in a dumpster or whatever, but the majority of homeless kids live with someone else,” said Eric Hinson, county commissioner and homelessness specialist for the School Board. “A lot of kids live with their grandparents, but it’s part- time, it’s not full-time. So that kid’s considered homeless.

“So we try to know that, Hinson continued, “because once we know, we can help those families out. And a lot of these organizations have services we don’t know about. Once we know what services we have access to, with a meeting like this, we know where to send those kids.”

According to Hinson, there are nearly 700 homeless youths in Gadsden County who would qualify for services from the School Board.

“There’s a serious need, and once people know the definition then we can be able to help. We all know grandparents that are keeping children. But they don’t realize they can have services, like dental services, where someone can help them along the way.”

“I believe that it takes a village to raise a child,” Hinson continued. “The more people that are in on it, the more people that have a passion about it, the better it’ll get. If you isolate yourself and don’t work with other people, it can be difficult. But if we all work together as a group, we can sustain ourselves longer than someone on their own.”

According to Taylor, more businesses and organizations should put an effort into fighting their community’s homelessness problem, because the benefits come back around to help everyone.

“It benefits everyone in the community,” Taylor said. “When you have a family that’s now contributing back, now you have a person that’s capable of paying taxes, holding down a job, taking care of their own family, buying goods from local businesses. It all benefits us when that person can take care of their own needs. It gives back.”

In attendance at the meeting also was Theresa Frederick, a representative of Congressman Al Lawson.

“I’m impressed by the overall turnout,” Frederick said. “It’s getting people together that can solve issues. It’s nice to be able to pick up the phone when you have somebody who is in need and help them out however much we can.”