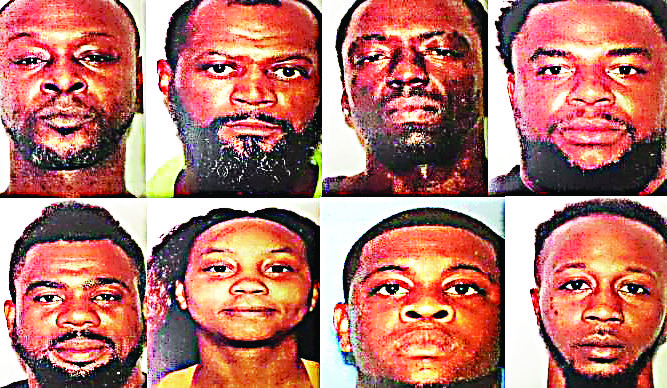 Thanks to a major Gadsden County dogfighting bust executed recently by law enforcement from multiple federal, state and local agencies, an estimated 100 dogs have been freed from the bonds of illegal dogfighting, and their former owners are now in chains, authorities announced at a press conference this past week.

“The United States Attorney’s Office takes allegations of dog fighting very seriously. Our society can be judged, in part, by how we treat our animals,” Keefe said in a statement. “This office will work with our partners at the federal, state, and local levels to pursue such cases vigorously.”

Echoing Keefe’s words at a press conference this past Tuesday, Gadsden County Sheriff Morris Young said, “We will not tolerate drug dealing, dog fighting or anything like that in Gadsden County.”

All but one of the accused are currently behind bars, arrested in a pre-dawn raid involving more than 50 SWAT agents; defendant Howard remained at large as of press time Tuesday.

Four of the defendants – Hadley, Donaldson, McMillian, and Colston – were arrested in May on federal drug trafficking charges, stemming from another massive multi-agency investigation involving the distribution of methamphetamine, cocaine and MDMA (3,4-Methyl​enedioxy​methamphetamine, a.k.a. “ecstacy’ or “molly”) throughout the northcentral panhandle of Florida between 2018 and 2019. The alleged dogfighting ring was uncovered by the Organized Crime Drug Enforcement Task Force (OCDETF) – a joint federal, state, and local law enforcement cooperative – during the initial drug trafficking investigation, officials said.

U.S. Department of Agriculture special agent Miles Davis noted, “These ventures [dogfighting] as proven by this investigation entail other criminal activity involving drugs, firearms and gambling. This investigation in particular proves how intertwined illegal dogfighting ventures are with these other serious crimes.”

Investigators said the eight defendants on the recent federal dogfighting indictment “organized and conducted large-scale illegal dogfighting operations” throughout northern Florida from 2014 to 2019. The indictment states that the defendants bred, housed, trained and fought pit bulls and “pit bull-type” dogs.

According to a “cooperating source” helping with the investigation, the indictment continues, the suspects communicated with each other by telephone and text messaging regarding “the transporting, delivering, exchanging and selling of the animals, and the location of fights held around the county.” The indictment even accuses one of the defendants of allowing a dog to drown in a swimming pool while training for a fight.

During the dogfighting investigation – which began 18 months ago, according to Sheriff Morris – authorities executed multiple search warrants on properties allegedly involved in training, housing and conducting illegal dogfights, recovering 100+ dogs during raids, according to a statement from the office of U.S. Attorney for the Northern District of Florida. Many of the seized dogs – which have since been placed into foster care by the U.S. Marshals Service – had visible injuries ranging from cuts and bruises to open, festering wounds, authorities said. Lawmen arrived tragically too late in at least one of the raids, finding the remains of deceased dogs, according to the indictment.

Sheriff Young stressed Tuesday that the dogfighting investigation is far from closed, and the recent indictment marks only the beginning.

“There’s more to come,” Young said. “I just want to let everyone in Gadsden County know to tell their loved ones who are involved in these crimes to cease and desist, because we are going to come for them.”

The defendants in the indictment face a combined 83 federal dogfighting charges, with penalties including up to five years imprisonment and fines up to $250,000, per count.