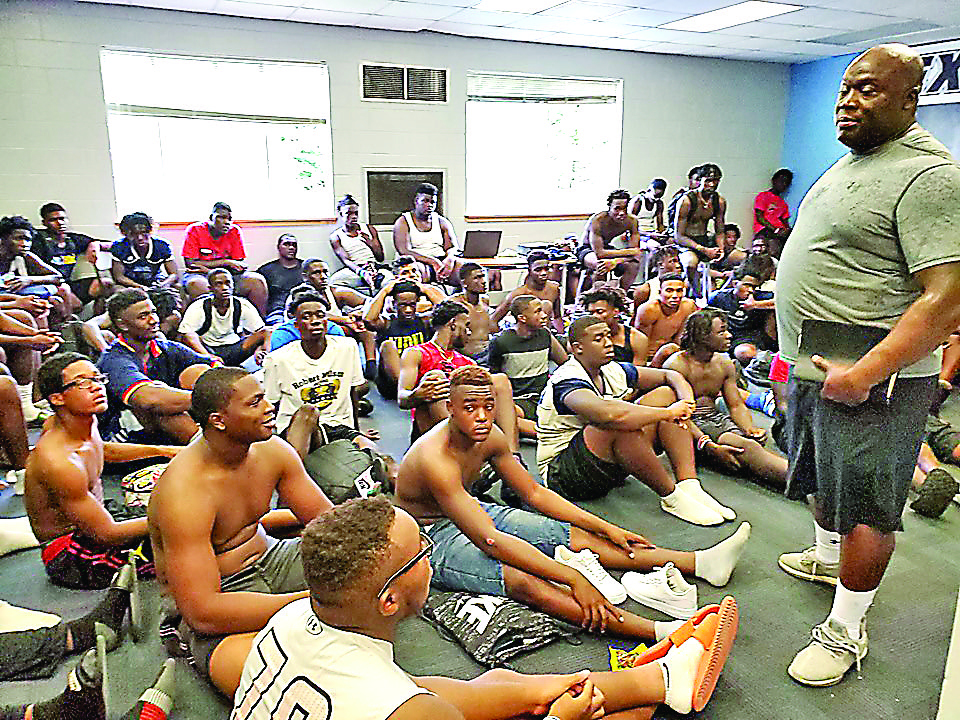 With the 2019 regular season days away from launch and a new head coach at the helm, it’s no secret that Jaguar football fever is spreading…voraciously. A loss-weary but admirably optimistic Gadsden County populace looks longingly to Corey Fuller – the Gadsden County High School football program’s new top man – for a miracle comeback, following last year’s winless season. It’s a dynamic echoed elegantly in the scene above: young Jaguar ballers gather at the feet of Coach Corey Fuller like disciples drawn unto a guru or prophet. As evidenced by their unbroken gazes toward their teacher/mentor/leader face, each player seems to cling to Fuller’s every word – in respect, and no doubt a bit of awe. Fuller’s triumphant return to Gadsden County – where in the early 2000s he led the East Gadsden Jaguars to multiple winning seasons, including a final four appearance – has been much-heralded by local school leaders, as well as many Jag fans and alums. With social media and water coolers abuzz with hopeful speculation on the 2019 season, it’s fair to say Fuller has achieved something of a heroic, perhaps even mythical status around town. Though certainly confident about the future, so far Fuller is not promising “miracles,” per se, and he’s quick to distance himself – if not altogether balk at – any characterizations that lean toward the messianic. Fuller has, however, repeatedly framed the upcoming season in terms of a “new day” or a “new thing.” A man passionately devoted to his faith, Fuller said he gleaned the concept from the Bible – from a quote by Jesus Christ, specifically. “The old is dead – we’re fixin’ to do a new thing,” Fuller tells his attentive players earlier this week. “It’s right here in the scripture: ‘Behold, I will do a new thing.’ That’s Christ talking to you. He’s gonna do a new thing in us, and we’re gonna change kids lives who walk on that campus.” “Changing lives on campus,” and not necessarily those of his players – it’s perhaps an unusual aim for a head varsity football coach. But talk of character dominates Fuller’s rousing fieldhouse rhetoric on this particular afternoon, pictured above, hours before this past week’s preseason jamboree was canceled due to weather. “Remember the new thing – from home to the school to the field,” Fuller continues. “We don’t want just good football players. We want to create great young men who’ll come back and give back. You understand?” “Yessir!” the players speak in near-perfect unison. Fuller goes on to say, “Some of y’all, people have done wrote you off. I’ve been in your shoes before; I’ve been labeled a black sheep of the family. I’ve been the little boy that wasn’t going nowhere. But God came into my life…and helped me. That’s the new thing we’ve been talking about. A man may have brought me back here, but God sent me here – for a reason. And you, and you, and you, and you are here for a reason.” Despite Fuller’s positive speech, however, the elephant in the room remained: this was a team that was winless last season – can this season prove any better? But Fuller addressed the pesky apprehensions regarding last season likely still lingering amongst some of his crew, as well, declaring, “All that stuff that happened the last two years – it’s gone. Don’t nobody expect you to be sorry. Rosa Parks wouldn’t give up her seat in the front and go to the back of the bus. But that’s the problem with some of us – we’ve got a backseat mentality. Why we don’t feel like we should be first?” Want to catch the “new thing” firsthand this season? The 2019 Jaguar football schedule is posted on today’s Sports page, as is week one of our popular annual football contest. Support your local high school players by attending all the games you can. But when you can’t, The Herald will provide scores and wrap-ups each week – from Gadsden, Munroe and Tallavana.