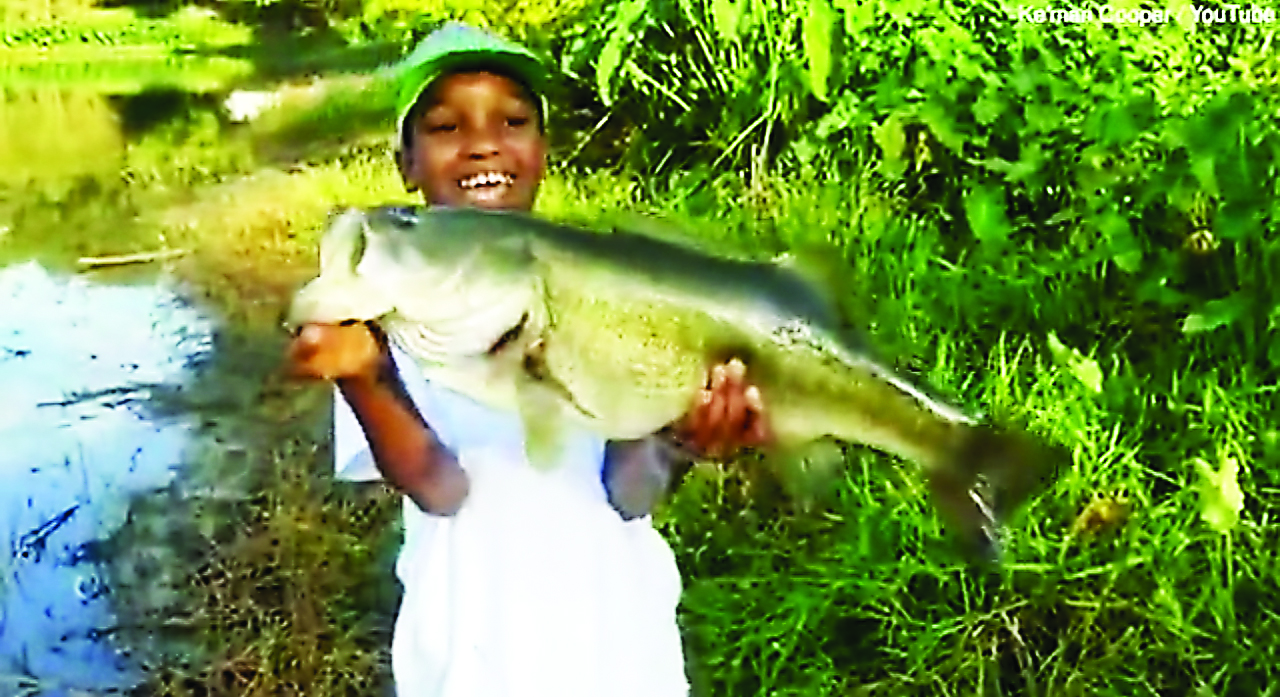 “One day we gonna meet back again,” young Quincy angler Kemari Cooper says as he releases the monster largemouth bass caught moments earlier back into the dark, tannic waters from whence it came. “I hope you go back and be better.”

Since being uttered this past week during an afternoon fishing trip, these simple yet profoundly positive words of grace and kindness have melted hearts around the globe. Kemari Cooper’s father, Velt Cooper, stood by filming as his young son’s eyes lit up and a smile spread across his face after hooking what felt like “a big one.” The short video, which has so far garnered millions of views and hundreds of thousands of “likes” on multiple online social media platforms, depicts the Gadsden County native son as possessing not just a natural knack for fishing, but an innate sense of benevolence and respect for the natural world. And the at-first-glance-ordinary home video has turned Kemari Coooper into an overnight “ce-web-rity” – a sensation among professional anglers and celebrity social activists, numerous examples of whom have commented on and shared the video, contributing to its without-a-doubt “viral” status. Web surfers the world over have adopted Kemari as something of a poster child for what’s right about his oft-maligned generation – an emissary for kindness, a spokesperson for acts of grace and an object lesson in what fatherly support and involvement can do for the average child.

News media outlets from across the nation and as far away as Europe and Asia have paid the boy homage. But such grand epithets and international internet fame are no doubt far removed from the youngster’s mind as Dad’s camera rolls; captured in this three-and-a-half-minute clip is just a Quincy boy and his father, out fishing – a scene repeated time and again each weekend on the banks of ponds, creeks, rivers and other fishing holes across Gadsden County.

Against the vigorous resistance of a then yet-unidentified aquatic predator, a talented young fisherman jerks his youth-sized rod and skillfully reels in foot after foot of line, until out of the water leaps an energetic, magnificently grand largemouth bass.

The big fish’s sleek scales glisten in the sunlight as the boy – grinning ear to ear – unhooks the bass and presents it to his father, who has brandished a digital fish scale while simultaneously continuing to film the magical moment. It’s how the video clip begins – a sequence of events likely familiar to many father-son fishing duos. It’s the events that unfold after the minute-and-a-half mark, however, that set this recording of Kemari and Velt Cooper apart.

The largemouth bass weighs in at a nifty 7.1 pounds – a whopper by any angler’s standards, but a personal best for young Kemari, whose father can be heard in the background cheering him on as the scale display climbs to “7.1.” While many – young and old alike – faced with such exuberant circumstances might dream of a mounted trophy to prove their finned feat, Kemari never hesitates, never wavers in his plans for his boast-worthy spoils – it’s back into the water, back home for this fish.

“Let’s put this beauty back in the water, my personal best,” Kemari says, beaminng as he gently lowers his catch into water. “I hope you go back and be better. One day we gonna meet back again.” One might characterize the sweet words and compassionate act as a reprieve of sorts; but you could argue such a distinction would be a misnomer, as – for Kemari, it seems – there was never another path to take: Boy catches fish. Fish returns home. End of story.

As the big bass swims away, Kemari shouts, “Show me what you working with!”

Thanks to his thoughtful words and actions and his father’s video documentation, now the entire world knows what Quincy resident Kemari Cooper is “working with” – a warm heart, a kind soul: the stuff Gadsden County dreams are made of.