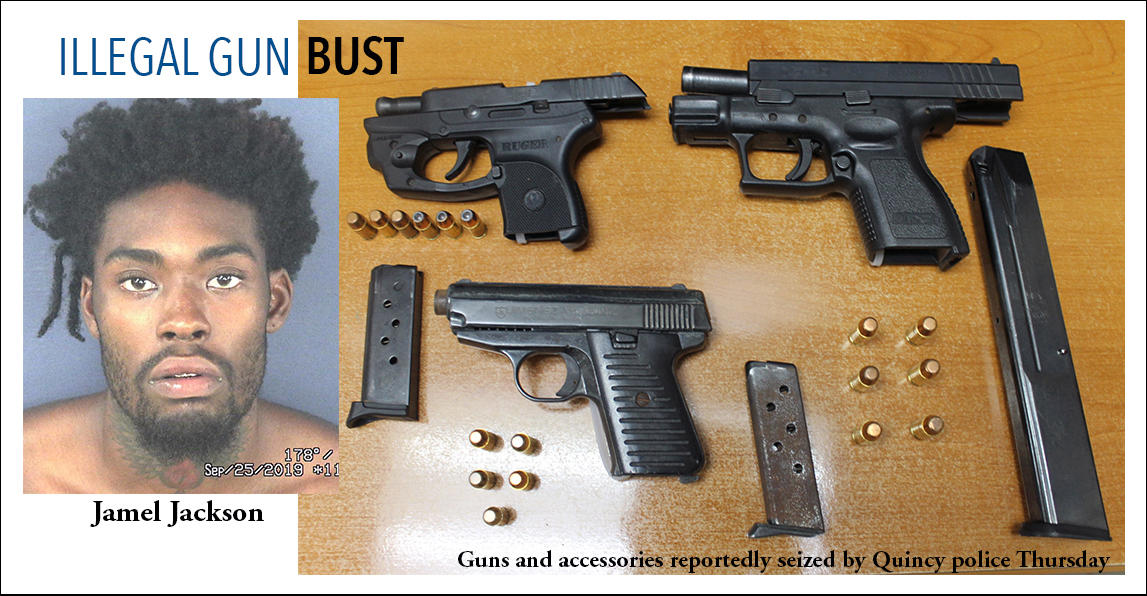 Three local residents – including two juveniles – have been charged with felony weapons and other offenses, and three illegal firearms have been taken off Gadsden County streets, police reported earlier this week following a gun bust at a Quincy apartment complex.

One of the juveniles – a 17-year-old whom authorities declined to identify by name, citing his juvenile status – has also been implicated in a September 16 shooting on Arlington Circle that sent a 20-year-old to the hospital with a bullet wound to his hip, according to a statement issued by Quincy Police Chief Glenn Sapp.

Around 6:15 p.m. this past Wednesday, Quincy police responded to Gadsden Arms Apartments in Quincy, spurred by an anonymous tip referencing “multiple individuals in possession of firearms,” including a “sawed off shotgun” at that location, a police report states. As officers approached the South Stewart Street housing projects/apartment complex, “numerous young men” bolted from the scene, and police immediately gave chase on foot, the report continues. During the pursuit, officers reportedly witnessed several of the fleeing suspects toss aside guns that they had tucked away on their persons.

Police eventually caught up to 21-year-old Jamel Trequan Jackson and two juveniles, one age 17, the other just 15; after detaining the three suspects, officers scoured the area for weapons believed to have been ditched during the lengthy foot pursuit. The search yielded two .380-caliber and one .40 caliber handguns, each with loaded magazines, police said, adding they were unable to locate the “sawed-off shotgun” referenced in the anonymous tip. Two of the recovered pistols had been reported stolen out of Tallahassee and are believed to have been used in crimes there, according to police, who point to this as an example of “criminals moving freely between” the capital city and Quincy “to commit crimes and hide.”

Jackson is charged with grand theft firearm, possession of firearm by a convicted felon, violation of probation and resisting arrest without violence; he is currently in custody at the Gadsden County Jail with bond revoked, according to court records. The 15-year-old arrestee is charged violation of probation, public foray and resisting arrest without violence; he was transported to the juvenile detention center in Tallahassee following his arrest this past Wednesday.

The 17-year-old  arrestee was also taken to the juvenile detention center in Tallahassee this past week, booked into the facility on charges of grand theft firearm possession of firearm by a minor and resisting arrest without violence. Information obtained from later witness interviews led police to conclude that the  17-year-old is also responsible for a September 16 shooting, in which the suspect allegedly fired multiple rounds into a house on Arlington Street in Quincy, wounding a 20-year-old man. As a result of their later findings, police tacked on additional crimes to the 17-year-old’s current list of charges: shooting into an unoccupied dwelling, discharging a firearm and another charge of possession of a firearm by a minor, according to a statement issued by Quincy police.

In an earlier statement – issued shortly after the September 16 shooting – Chief Sapp expressed concern regarding the apparent uptick in violent crime in Gadsden County of late; particularly troubling, Chief Sapp added in a statement issued this past week, is that many of the most recent acts of violence perpetrated on local streets have been at the hands of teenagers.

“Parents must do a better job of controlling their teenagers by getting more information from them about who they are hanging with, where they are hanging out at and what they are doing,” Chief Sapp said. “The Quincy Police Department takes gun crimes extremely serious and will vigorously investigate them. Those who take it upon themselves to threaten the lives of innocent citizens will be held accountable. If you pull a gun, you’re probably done.”

Many of the suspects encountered and arrested this past Wednesday have “serious criminal histories” and some were already under investigation for other violent crimes and shootings, Chief Sapp added.

“Activity at [Gadsden Arms Apartments] seems to be increasing, and while police routinely patrol the large property, they will be meeting with management soon to demand they do more to stem the activity on their property,” a statement issued by Chief Sapp’s office says.

Police urge anyone with information about the incident at Gadsden Arms this past week or any other crime to contact Captain Robert Mixson of the Quincy Police Department’s Criminal Investigations Division at (850) 627-0138.