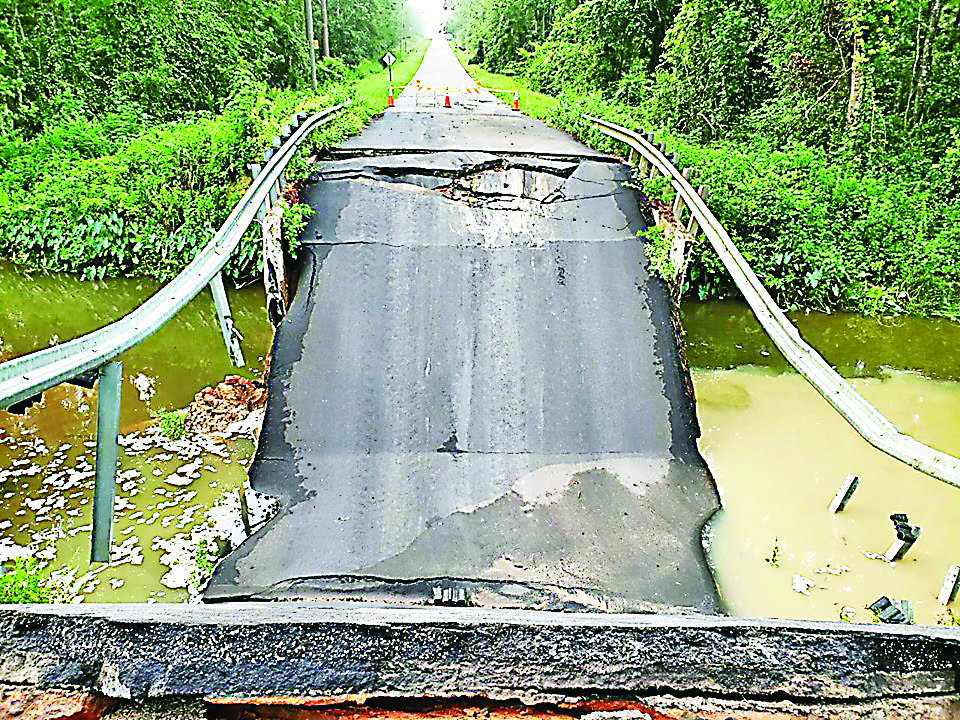 A bridge collapse last Wednesday near the Florida-Georgia line sent two vehicles airborne, two motorists to the hospital and has resulted in the closure of two Gadsden County bridges and roadways. Harder to quantify, however, are the number of headaches for local commuters forced to take long detours in the wake of the incident.

Following a week of heavy downpours and flash flooding in parts of Gadsden County, sometime in the early morning hours of Wednesday, August 21, the Hutchinson Ferry Road bridge – just south of the Gadsden-Decatur County (Georgia) border – collapsed, sending concrete, chunks of asphalt and twisted metal crashing into the swollen creek below.

Around 5 a.m., a Chevy Silverado driven by James Watson, Jr. of Bainbridge “went airborne” as he attempted to cross the broken bridge – unnoticed by the driver in the sparse dawn light, a Florida Highway Patrol report states. The Silverado “went flying” across the road gap, landing on its roof, the report continues. A half-hour later, the failed bridge claimed a second victim: Melissa Kelly of Quincy, who, too, “went airborne” as she drove her Ford Taurus past the brink, a second Highway Patrol report states. Kelly’s less-than-graceful landing damaged her car’s front end; though official incident reports classified both Watson and Kelly’s injuries as “minor,” Watson told The Herald they were anything but. It will be months before Watson is fully recovered, he said in message to The Herald this past Thursday. Kelly’s current condition is unknown, but according to authorities she was hospitalized briefly and released not long thereafter. Signs have since been posted ahead of the now-closed bridge in both directions, barring traffic and directing motorists toward an alternate route.

As for the bridge itself, it could be months or longer before repairs are made and/or the bridge replaced and the road reopened, Gadsden County Road and Bridge officials said. The Hutchinson Ferry Road incident has also prompted the closure of a second Gadsden County road and bridge – on Juniper Creek Road, near the Sawdust community.

Deemed “unsafe” by the Florida Department of Transportation, the Juniper Creek Road bridge will be off-limits to traffic for an “unknown” period of time, while state engineers assess the situation and actions are taken to remedy any safety hazards, a Department of Transportation spokesperson said. The spokesperson suggested the Bainbridge Highway as an alternate travel route for area residents.

According to county records, the Juniper Creek Road bridge was next to be bid out for replacement, but with its closure last week, the timetable and plans for replacement have been thrown into question. The “unsafe” designation at Juniper Creek came following an impromptu safety evaluation of the county’s bridges  spurred by the Hutchinson Ferry bridge collapse.

According to records in a National Bridge Inspection database, in 2016 the Hutchinson Ferry Road bridge – built in 1960 –  was found to be “structurally deficient” but within allowable safety tolerances, thus, requiring no repairs or modifications. All county bridges are inspected for safety at least once a year, a Florida Department of Transportation spokesperson said. The Herald has requested documents from the most recent round of annual county bridge inspections, but they were not yet available as of press time this past Tuesday afternoon. Florida Department of Transportation officials said it may take “around a week” to compile and send the requested inspection reports.

Though the Hutchinson Ferry Road bridge failure is still under investigation, officials with both the Florida Department of Transportation and the Gadsden County Public Works department said they suspect higher-than-average rainfall since Hurricane Michael likely caused “structural deterioration” that ultimately led to the collapse.