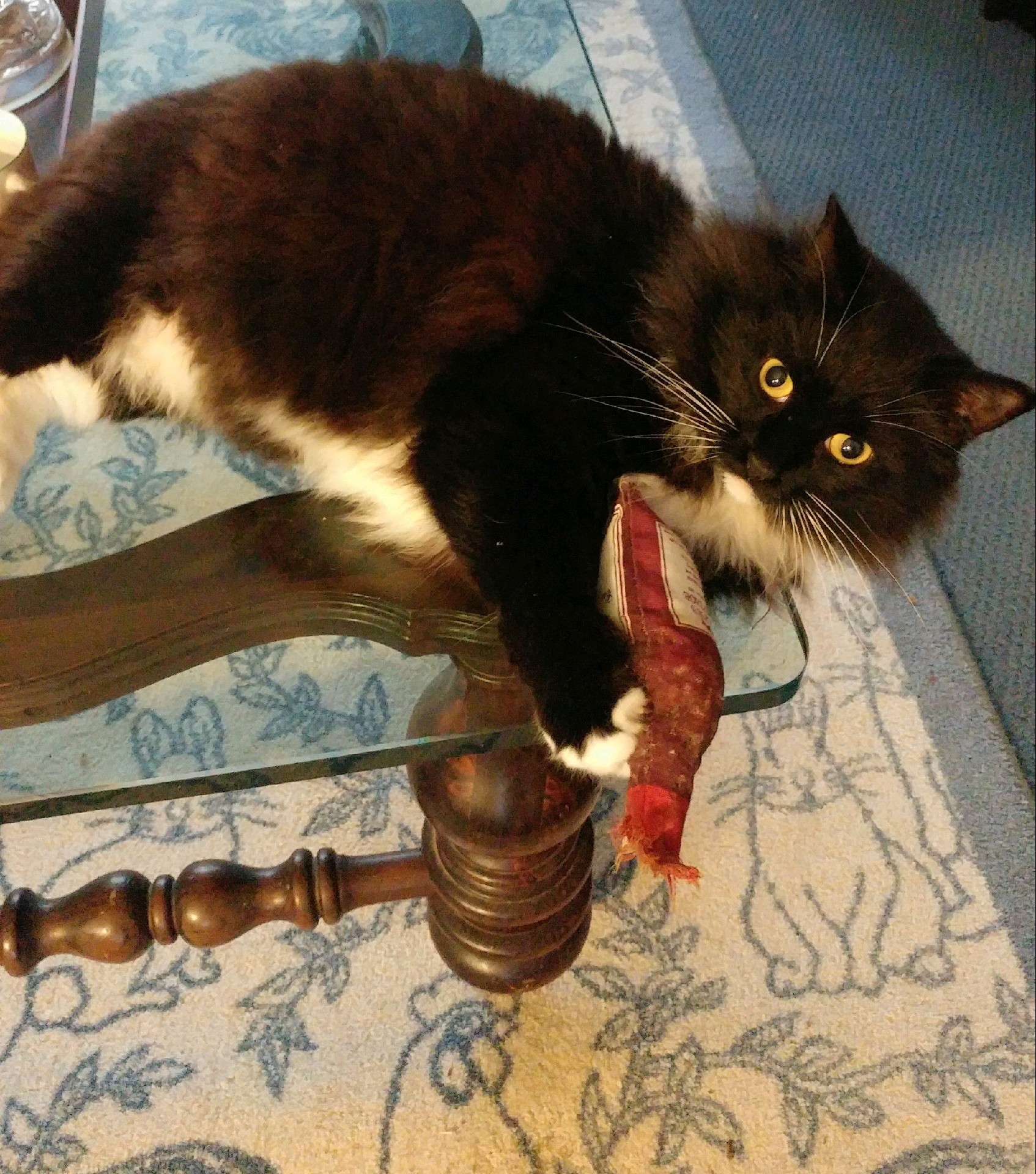 Beebe Baloo has gotten to a stage in his development where he doesn’t want to play by the rules.

I don’t like to say this about my sweet boy, but he has gotten a little wild. He is in his tweens but already acting more like the typical teenager.

He refuses to do his one and only trick called Roly Poly unless he personally is trying to attract attention. In the past, whenever there were guests at our house, I would twirl my hand and command Roly Poly and he would roll over and over basking in the gasps and applause his performance engendered.

Now he just gives me a withering look and walks away. When he feels he isn’t getting enough homage paid to him, he will initiate a performance, but certainly not at my command.

I realize that he needs to become more independent, but I miss my old lovable, purring, clinging cat.

He has developed other bad habits, which I guess are part of normal growth and development patterns, but which I find undesirable.

For instance, I found an issue of “Cat Fancy” open to the centerfold stuffed under his bed. I guess this is part of normal adolescence but I don’t like it.

He also has begun to use different criteria in choosing his friends. Good solid morals and family values do not seem as important to him as they have in the past. He has had a long distance relationship with a sweet well-brought up young lady cat named Honeybunch for several years. With Valentine’s Day coming up, I have been pushing him to look around for a nice gift for her, but I can elicit no response to my suggestions.

He seems bored by Honeybunch and spends a lot of time sitting on the windowsill, ogling a couple of dolled-up street-girl cats wearing rhinestone collars.

I am worried that he will soon be mixing with the wrong crowd, and that I am not starting him out on the right path.

I now have to relate his worst trait of all, which I am sorry to have to tell you has come about because of the actions of The Herald’s publisher, Mark Pettus.

It all began when Mark sent a gift home to Beebe Baloo. It was a stuffed toy from Fat Cat Winery, a cat bernet sauvignon. At first, Beebe ignored it. He was miffed by the Fat Cat title as he is a bit sensitive about his weight. After a while he got a whiff of the tantalizing aroma and he began nipping on that catnip wine.

He ripped the bottle open until leaves were strewn around the floor and then he rolled in the leaves like an idiot. I was horrified. He worked himself up into a frenzy and then staggered over to his bed to sleep it off.

My cat was now a defiant, secret stasher of salacious material, trying to mix with bad company, and worst of all — a souse.

I had to plan an intervention or, at the very least, enroll him in CA (Catnip Anonymous).

Then, a funny thing happened. The wine lost its aroma and was soon forgotten. Honeybunch sent him a lovely portrait of herself wearing a string of pearls, which he was quite taken with. The magazines disappeared from under his bed and when the two she-cats came up to the window, Beebe growled and hissed at them. He is on Amazon right now getting some kitty perfume for Honeybunch.

He still does Roly Poly only when he feels like it, but it doesn’t pay to get too worked up over normal growth and development. After all he is a normal guy and I am an understanding progressive mom.

I congratulate myself, take two aspirin and try not to think about finding the phone off-the-hook each morning. Who has he been calling in the middle of the night? Has he been setting up a rendezvous with some hot kitten? Is he subscribing to more femme fatale cat magazines? Worst of all is he trying to find a supplier for more nip?

I tell myself he just likes to play with the phone cord, but am I just kidding myself?

It definitely is hard to be a cat mom.