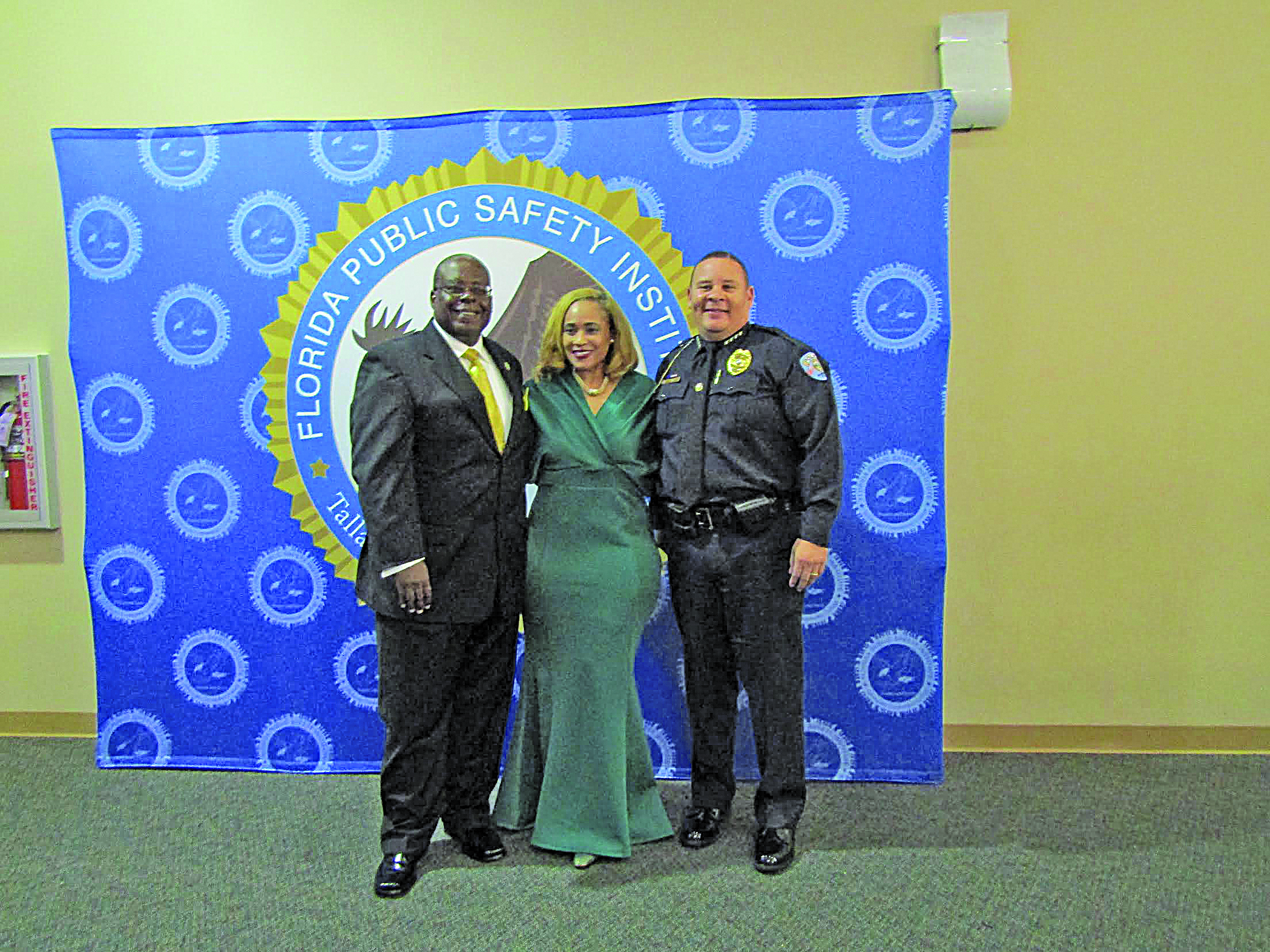 Chief Glenn Sapp of Quincy among three honored by institute

Approximately 200-plus people — including law enforcement officers, presenters, honorees and others — gathered to recognize three African Americans in the criminal justice profession who have embraced this year’s slogan, “Embracing the Challenges in the World Today.”

The meeting opened with a note being read from Florida Senator Bill Nelson giving voice to the challenges being given in today’s world and offering his support in all endeavors.

Florida Public Safety Institute Director E.E. Eunice next welcomed everyone and the Mistress of Ceremonies for the morning, Director Kim Allen, then took over the wheel of the celebration.

Among early presenters were Major Roderick Young of the Tallahassee Police Department and the presentation of colors by the Gadsden County High School Army JROTC Color Guard.

In a poignant moment, Captain Stefan Blue of the Florida Department of Agriculture and Trooper Detrick McClellan of the Florida Highway Patrol carried a red- white-and-blue, flower-filled large flag wreath as Lieutenant Adonious Duhart of the Florida Fish and Wildlife Conservation Commission read off names of the seven Florida officers killed in the line of duty in 2017 — followed by a moment of silence.

Chiquita Kirkland then gave a musical tribute to the event, singing the Negro National Anthem, and Jade Livingston sang America the Beautiful in a beautiful rendition.

Honorees then took central stage to give their versions of how events in their lives have helped them embrace the challenges of today’s world.

Warden Edward Griffin of the Hernando Correctional Institute in Brooksville first said he liked to serve others.

Some of his lessons came from his service as a lifeguard and later when his first boss at the Florida Department of Corrections told him he had not been his first or second choice to serve in the position he was hired to and said, “but you’re here.”

His boss later took him aside after seeing his work ethic and said, “We all make bad mistakes: you should have been my first pick!”

Griffin said, “No matter what challenges you face, you must be based in God. You must face challenges. Don’t give in to those negative challenges. I couldn’t have dreamed I’d be a warden.

Sapp also gave an example of Hernandez Cortez, who craved the treasures of the Aztec Empire.

When his men were unsure they wanted to battle, Cortez told them, “Burn the boats!”

The troops realized he meant that they were not taking those ships to get home, but must conquer their enemy to get their ships.

He won the battle.

“What is your excellence?” asked Sapp. “The power of love overcomes all and anything. Plant the seed to be great. None of us are alone,”said Chief Sapp.

The final honoree, Gigi Hawthorne, is one of the Florida Public Safety Institute’s own as the specialized and advanced instruction coordinator. She has worked with the institute for many years.

Eunice said Hawthorne and her staff have performed miracles in bringing forward about 200 events that have thousands of attendees each year.

The Florida Public Safety Institute was established by Tallahassee Community College in 2009 to train the best and brightest in public safety careers such as law enforcement and firefighting.