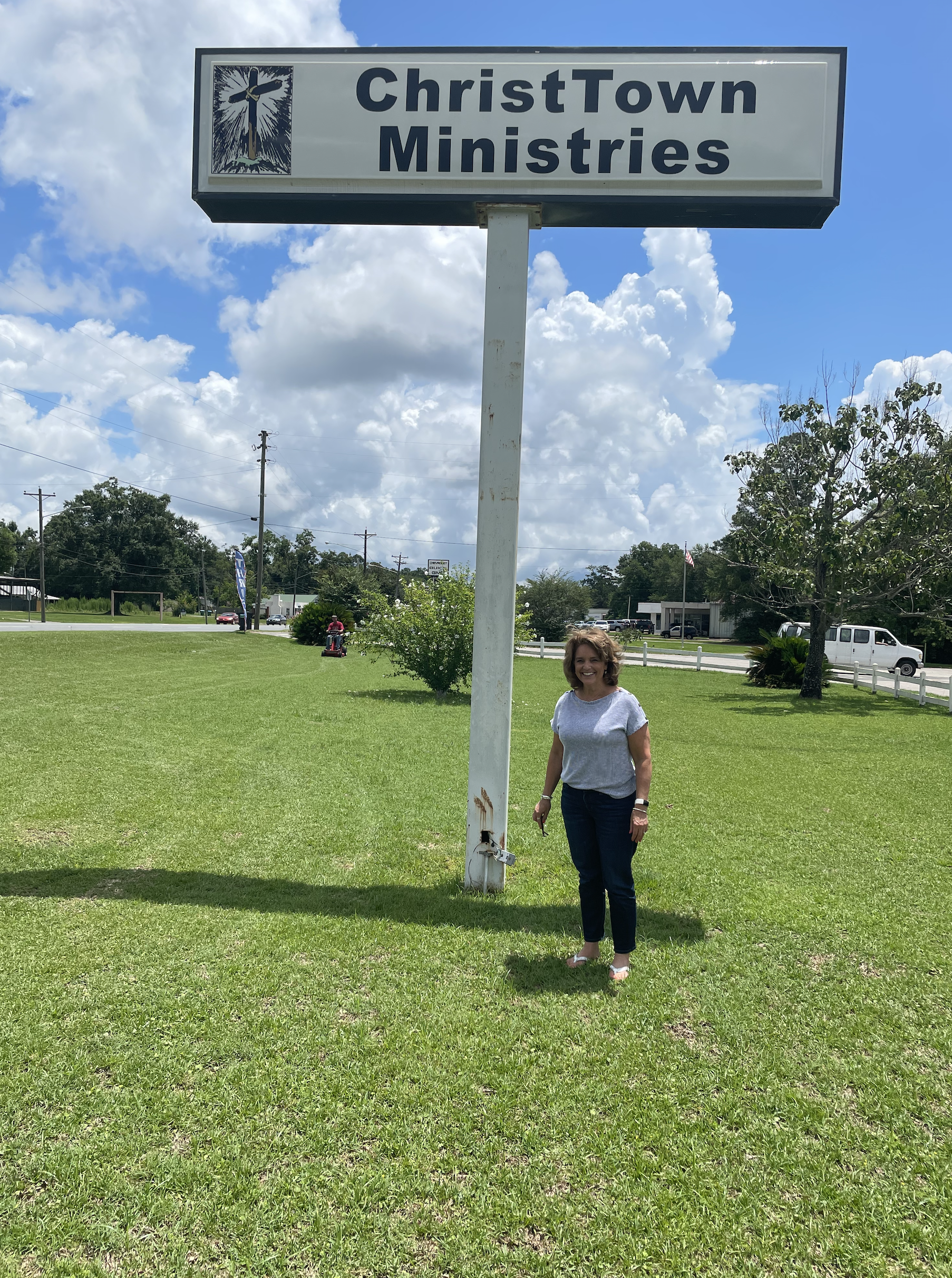 ChristTown Ministries supports men in their fight against addiction

ChristTown Ministries has been dedicated to the rehabilitation of men from all walks of life for 19 years.

According to the ministry’s co-founder Laura Wells-Linton, ChristTown Ministries was inspired by the journey of her deceased husband and founder of the ministry, Pastor Bob Wells.

Wells-Linton says that ChristTown Ministries’ male-only program mirrors Bob and Laura’s own road to the redemption of their emotional and physical health: a pure transformation of the mind, body and soul.

Wells-Linton said that she and Bob met in a bar during a dark time in their own personal lives; after a conversation, the two found themselves in love and quickly became inseparable.

While dating, Bob struggled with drinking problems that threatened an otherwise happy union.

Despite Bob’s personal drinking issues, Wells-Linton says her love for Bob triumphed over it all and she stayed by his side to help him past his struggles – and when he asked her to marry him, she agreed.

According to Wells-Linton, Bob had started drinking and using drugs socially while he was in his early twenties.

Before the couple got married, they took individual and combined counseling sessions to help with Bob’s alcoholic recovery process, and at one of her sessions, the counselor showed Laura the Jellinek curve, which illustrates the different stages an alcohol addiction can take you through.

The counselor advised Laura to discover the path her husband was on and for Laura to run the opposite direction, “as hard and fast as she could.”

On the ride home from the counseling session Bob asked Laura what the counselor spoke to her about, and she looked at him and repeated the counselor’s advice.

Bob asked Laura what her final decision would be, and she replied: “I love you and I’m going to marry you, your drinking will just have to make or break this marriage.”

The Wells got married in 1990, and had their first child together in February of 1992, Josh Wells.

The Wells would be married for over 20 years, and during the early years of their marriage, Bob would continue to struggle against his addictions.

Laura recounts one evening in 1996, when she and their son found Bob lying face-down on the floor of their living room, drug paraphernalia surrounding him.

According to Laura, Bob had experienced an overdose and upon waking, the first glimpse of his son Josh was the image that initiated his commitment to his recovery at the Addiction Recovery Center Program at Tallahassee Community Hospital.

After having to spend 1996’s Father’s Day weekend at the Addiction Recovery Center, Laura said that Bob proclaimed he was at the end of his addiction and would be getting better.

Although Laura had already taken counseling classes with Bob before, she says she was more than happy to stand alongside him in family meetings and to begin her own recovery process as well.

According to Laura, while her husband was overcoming his addictions, she had discovered that she was also suffering from an addiction towards codependency; she was able to take advantage of classes the recovery center offered that would assist her in her own healing as well.

“I was with him everyday, very active in church in choir, nursery duty and I have tons of Bible study notes from the time we both spent devoted to our church,” said Laura Wells-Linton. “After my husband passed, the church told me several years later that they’d caught him using drugs once in the church’s bathroom but instead of throwing us out, they took the opportunity to come minister to him and not tell anyone about it.”

After three years of working towards recovery, Laura Wells-Linton says that she and her husband’s relationship was “amazing.”

“I remember looking at him and saying, ‘God didn’t do this for us to just exist.’ [Bob] grabbed my hand and agreed. We both knelt on our couch and surrendered to God together and we let him know we’d do whatever it is that he’d have us to do,” says Wells-Linton.

After the Wells’ own recovery from their individual addictions, they decided to found a ministry to help other men struggling to overcome alcohol and drug related addictions – and ChristTown Ministries was born.

According to Wells-Linton, the ministry is patterned after her and Bob’s journey, but on a much larger scale.

“It really all started with Bob bringing men home off of the street when he worked at Haven of Rest Rescue Mission,” said Wells-Linton, adding that her husband would help these men by washing their clothes, feeding them and allowing them to stay with their family for a few days before Bob could find them a home.

“He’d pick men up and bring them to church with us. When he was first called to do this, I was in complete awe,” said Wells-Linton.

While the couple felt a calling to start a ministry, Wells-Linton said that neither she nor Bob knew where to start with founding a ministry.

Then, Wells-Linton recalls how one morning, Bob said he heard God give him guidance on how to start the ministry – “That’s when he knew what he would do. He was ready to do what God had called him to do,” said Wells-Linton.

ChristTown Ministries, Inc. was established in August of 2002 and began offering addiction recovery, paired with spiritual awakening, to men.

In 2016, Bob Wells passed away, and Laura took up the mantle of directing the day-to-day aspects of her husband’s ministry.

While Laura Wells-Linton has since remarried, she and her current husband continue to work together to help men overcome their addictions and receive spiritual guidance.

According to Wells-Linton, the men in the program aren’t allowed to work during their first year enrolled, but ChristTown provides a residence for up to 12 men and the men can volunteer for compensation at the two contributing fundraisers for the program, ChristTown Thrift Store and ChristTown Ministries Professional Movers.

As part of the recovery program, ChristTown Ministries requires the men to complete several tasks in the program’s two-phases curriculum.

Phase one is dedicated to the “transformation of the mind” during which books, workbooks, required readings, and curriculum resources are provided to assist the men with their mental recovery.

Wells-Linton teaches life skill courses to the men, including a 10-week anger-management course, and a course expounding on resisting temptation and protecting your body against daily spiritual and mental attacks.

Wells-Linton also assists with teaching a course called “steps to freedom in Christ” for the program residents.

Once the men in the program have acclimated themselves to a level of positive and sustainable normalcy, they’ll be approved to move to the second phase of the program.

Phase two is devoted to adjusting and acclimating themselves to their new lifestyles.

The men have to comprehend money management, obtain their own steady housing and employment, or a certification for a trade before becoming an approved graduating resident and receiving their certificate of completion.

According to Kevin Shulla, ChristTown’s Associate Pastor and Program Entry Director, he was led to the ministry after watching his son replicate snorting drugs by chopping up salt.

“You think they’re not paying attention, but they really are,” said Shulla.

In desperation, Shula said he called his brother for help, and he was told about ChristTown.

“I saw a genuine love that I never experienced, not even from my own father. I found Christ and Pastor Bob. He was a light in a dark, dark place [and] taught me how to be a real man,” said Shulla. “My life made a shift. They loved me for me, I talked to them about my problems and they didn’t judge me.”

“When I found out about them, I had a bad drug problem and was suffering from addiction. I got to a point where I didn’t want to do it anymore,” said one of the ChristTown program attendees, Mark Cleveland. “ChristTown is very loving, compassionate, so focused and centered around Christ, building a relationship with him and weeding out negativity and toxicity. Giving you life skills and how to mature and become a successful adult in society.”

According to Cleveland, he has been able to find a new sense of meaning and connection thanks to his time at the ministry.

“There’s a lot of love in this place, I grew up in foster care and I didn’t really feel like I had a purpose or meaning. I struggled with that connection and these people really are family to me. Everything I searched for, I’m now filling that void. I feel complete and whole,” said Cleveland.

According to Steve Corcora, another ChristTown resident and attendee, the addiction program has helped him maintain freedom in more ways than one.

“My problem was structure; I really was going to stay as high as I could without working,” said Corcora. “I remember spending my last dollar on the bus trying to pawn my comic books that were worth about $10,000 to get here. I’d lost my job because of COVID-19 and I kept getting denied unemployment. I really only collected enough money to buy a phone and use someone’s wifi. I didn’t even have enough to turn on the service.”

After getting in ChristTown’s addiction program, Corcora said the ministry has since helped him get his career and credit together, something he never thought would happen.

“I’m in great standing with my family now, my parents are stoked…I’ve been going against the grain for so long,” said Corcora.

Without his addictions holding him back, no credit debt, and a new career license, Corcora calls himself a “free bird.”

The only requirement for male residents looking to join ChristTown Ministries, is a genuine desire to change; currently the program is not open to female residents.

If you’re interested in more information about opportunities at ChristTown Ministries, contact their office at (850)-627-7181 or send an email to christtown@christtown.org

The ministry’s thrift store is located at 2121 West Jefferson Street, in Quincy.