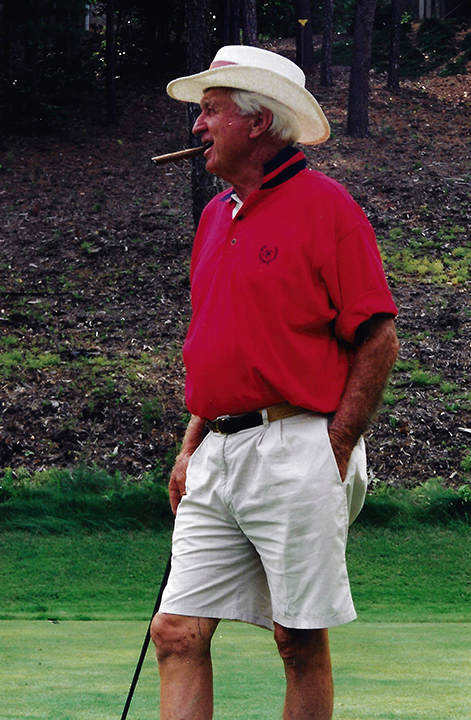 Charlie has lived in Greensboro for 91 ½ years and lives there now with his second wife, Jean. He has three children – two daughters and a son. His youngest daughter, Kathy Bryant, was killed in an accident. His other daughter, Gayle Fisher, lives at Lake Talquin, and his son, Ronnie, lives in Greensboro. As a young man, Charlie helped raise shade tobacco for fine cigars. He worked in the shipyard in Panama City, Fla. for three months before joining the Army Air Corps in 1943. He served in the South Pacific until 1946. At that time, so many young men were returning from service and colleges were filling up quickly. Because Florida State College for Women had available space, Charlie enrolled there in 1946, but as a student of the Tallahassee branch of the University of Florida. By the next year the school became co-ed and the name changed to the now-familiar Florida State University, from which he graduated in March 1950 with a degree in business administration. After graduation, a cigar factory in Greensboro hired young Charlie as assistant manager. The factory had 225 employees and made 250,000 cigars a day. Next, he took a job in Tallahassee in the Department of Workmen’s Compensation. There he worked for the next 34 years and was director by the time he left.

How did you happen to be on the first Board of Directors of TCC?
I was appointed. Two people from each of three counties (Gadsden, Leon, and Wakulla) were appointed to come together and set up TCC. Later it became the Board of Trustees and I served with Sam Cunningham and for a short time with Jack McMillan. I served on that board for 16 years. Tell me about the various leadership roles you’ve played during your time in Greensboro. I was a member of the Greensboro Kiwanis Club for over 20 years and served as president a couple of times. I was a member of the Quincy Chamber of Commerce. I’ve been a Deacon of the First Baptist Church of Greensboro for over 50 years and have been chairman of the Deacons several times. I am now a Deacon Americus. I’ve been president of the Southern Association of Worker’s Compensation Administrators, which includes 17 states from Texas to Virginia, and, as you know, I also served on the TCC Board of Trustees.

To what do you attribute your long active life?
Genes have to play a role, but I think it is mainly having a good time. I really enjoy life.

I understand you play golf almost every day at the Quincy Golf Club. What motivates you to do that? Well, I don’t play every day anymore. I play on Mondays and Fridays when my regular gang plays. It doesn’t need a motivation. It is just mostly fun. I enjoy being with the boys, playing golf, eating lunch and having lots of conversations.

With all the wisdom you’ve gained over your long life, is there any advice you’d like to give the younger generation?
Work at what you love. Follow where the Lord leads you and make it a clean life.