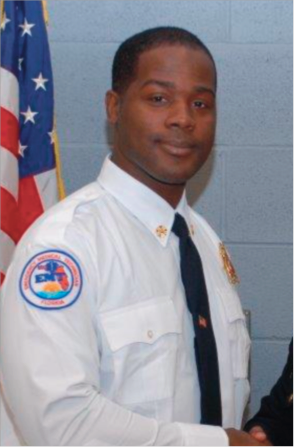 When one of Jerry Flanders Jr.’s friends suggested he sign up as a volunteer firefighter, he never dreamed he would one day be Midway’s fire chief.

Chief Flanders refuses to take credit for the department’s success, instead crediting Assistant Chief Cornelius Hall , who Flanders says keeps him on his toes. Flanders also credits participating in sports as he was growing up with making him a team player.

Every year the Midway Fire Department participates in a block party for the community, which also includes the Sheriff’s office and the health department. The party features a variety of fun and events, prizes and giveaways. Flanders says being a part of a team is what makes being a firefighter enjoyable. He also enjoys teaching his recruits the fundamentals and helping experiened firefighters maintain their skills.

What does it mean to be a volunteer firefighter?

Volunteer firemen are regular citizens with other jobs, but when needed, they drop everything and respond to fire emergencies. In Midway, volunteers respond to fires in the unincorporated parts of the city.

What are the unincorporated areas?

How many members do you have in your department?

It fluctuates. We usually have about eight, but people move, or get different jobs, which make them less available, or circumstances change, so the number is usually in a state of flux. The response by our volunteers varies with the time of year. Holidays are tough because so many families go away at that time.

Do your firefighters get any compensation and where do the funds for equipment etc. come from?

Volunteers do not get a salary. They receive $10 for responding to a call and $5 for attending meetings. The money comes from the county budget. County funds also make sure that equipment is serviced. We have a fire truck (probably one of the oldest). We make do with what we have. The new city manager also added some money to our budget recently.

It’s hard to understand why volunteers would drop everything and rush into danger without much recognition or monetary compensation. Why do this?

We are a team that’s like a family. We enjoy each other’s company and we care about each other and about our community. It’s only natural that we all want to have each other’s back.