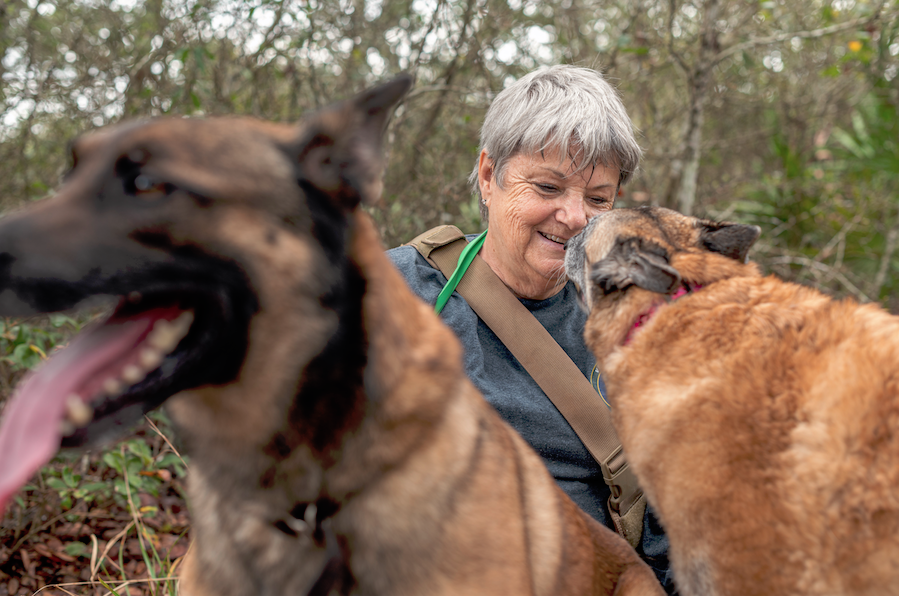 Shiraz is a 12-year-old, 50-pound Belgian Malinois, who won the 2020 American Kennel Fund Award for Canine Excellence in the Search and Rescue Dog category.

One cannot discuss Shiraz, however, without including her owner, Susan Goodhope, an obedience and cadaver dog trainer from Havana, who has participated in all of her searches.

They live on 11 acres in Havana with three other dogs and a gelding. Susan lived on the property with her husband, Robert, until his untimely death last June.

Susan spoke of this sad time in an article about Shiraz’s award in the American Kennel Club Gazette. “Shiraz was very affectionate and loving through those trying times and knew something was amiss. If I was upset she would come to me and put her head on my leg until I petted her…she took to sleeping at the foot of my bed, a new behavior for her.”

In her working life, Shiraz, has been a part of over 70 searches and she has made some incredible finds. She once found a toe from 670 AD. It was located three feet down in a midden (an ancient trash pile) in an Indian mound.

A man had been looking for that mound for eight years before Shiraz found it quickly.

QUESTION: What was your first impression of Shiraz, when you bought her as a pup?

“I bought her from an excellent breeder in Alabama. I studied her puppy tests. Her temperament test was excellent. She was very attentive. Belgian Malinois are usually aloof with strangers, but Shiraz is not. She was my immediate favorite and I chose her because of temperament, intelligence and willingness to work. I thought she would be a good cadaver dog, which takes two years to train, and she certainly has had an outstanding career. Besides the 2020 American Kennel Canine Award, she has won titles in conformation and obedience. The Florida Bar Association recognized her for her cadaver work and the Department of the Interior (Parks Services) for her work in finding graves.”

QUESTION: How did you train her?

“It is a long and complicated process, but you start small with maybe a bloody bandage or a loose tooth and then progress to more complicated procedures. A dog’s sense of smell is 10,000 to 100,000 times stronger than humans. When they are born, they can’t see for six weeks and they can’t hear for three weeks, so they are completely dependent on smell to find everything, including their food. All hunts start off telling the dog to go find something and they are trained to sit when they find it. When successful, they receive a reward, such as playing ball, tug, or praise from their owner. Shiraz likes treats.”

QUESTION: How did you come up with your tongue in cheek command ‘Find Hoffa’?

“It took a while. I heard what other trainers used, but I didn’t like any of their ideas. One day a friend of mine said, “I’ve got an idea. Why not tell Shiraz to find Hoffa?” I thought that was a great idea and that became the command. When I speak before groups, I can always differentiate between younger and older crowds, because the oldsters all get the joke, but the younger audiences don’t know who Hoffa was.”

QUESTION: Who requests your unique services?

“We get requests from law enforcement, from archeologists, from the park service and from family members who want to find relatives buried long ago. Cemeteries whose churches are no longer there, have become overgrown or lost over time. Descendants are often searching for these graves so they can put up monuments or honor the deceased in some way. Wherever the requests come from, we feel honored to help. We do not charge for this service.”

QUESTION: You and Shiraz were involved in finding a cemetery of enslaved people on a plantation in Natchez; Mississippi; in identifying an infant in 1955 whose burial place had been lost; and in attempting to find unmarked graves in the Arthur G. Dozier School for Boys in Marianna. These have to have been very emotional hunts. How do you cope?

“You have to realize that Shiraz has been so closely associated with me for years that my emotions affect her. On such hunts, I have to work very hard to keep as unemotional as possible. I have to keep my mind on the task at hand and the importance of it to so many people. While it is emotional work, Shiraz and I have mostly worked this out so that we can remain professional.”

“Shiraz has retired already. She has finished chemo and returns to the vet in January. She has built up an impressive work record, finding an old cemetery in a pine forest in Perry, Florida, finding people who were missing or suicidal and finding old graves left by murderers. She deserves to rest on her laurels now and be as comfortable as possible. Her longtime playmate, 80-pound Fletch has accompanied her on many hunts and has been her backup. Fletch will take over in any new ventures. I have cut back a lot but plan to become more engaged in the future.”

“I just want to say what an honor it has been to work with Shiraz and to bring closure to so many people. It says something about our furry friends that humans will turn to a dog for help.”