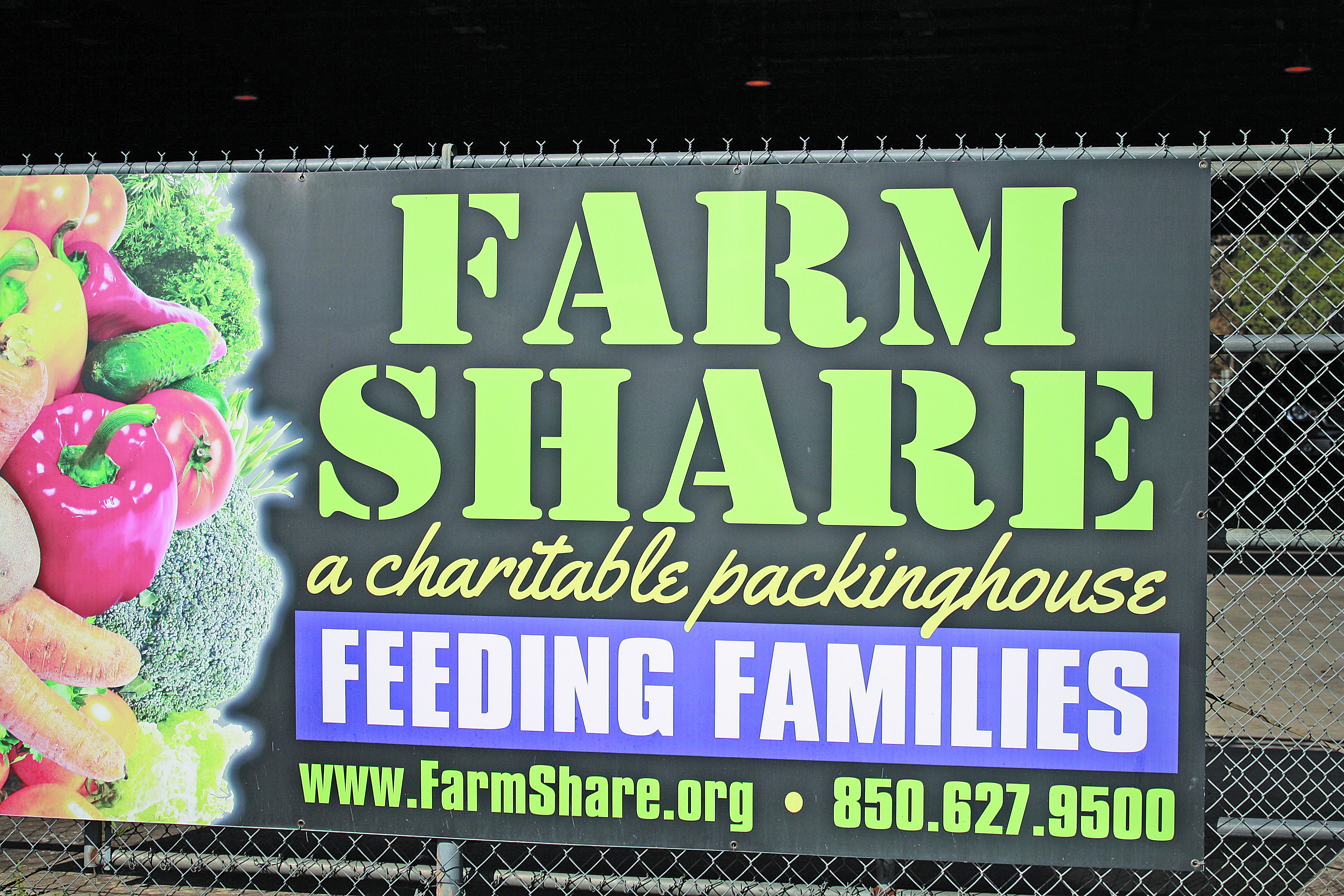 It’s a different type of “corner office with a view.”

At the top of a steep set of concrete stairs, Dave Reynolds’ desk looks out over the former tomato packing facility in Quincy that now houses Farm Share.

Reynolds, facility manager for 18 counties in the Panhan- dle and Big Bend area, has a view of a line of well-ordered vehicles slowly wending their way closer to the loading dock, where a small group of employees and volunteers in dark- green Farm Share T-shirts fill trunks and truck beds with millions of pounds of free food for hungry families.

Thirty minutes away, in an enormous warehouse in south-west Tallahassee, Rick Minor walks briskly among towering aisles of donated food, explaining how items are sorted, field- ing questions from working volunteers, and pointing out the storage capacity of the freezers.

He stops to joke with the “Polar Bear Club,” a group of retirees who volunteer to sort items in the perpetual winter of the warehouse freezers.

The Second Harvest website states that one in five people in the Big Bend experiences hunger.

Gadsden County has the highest percentage of food-inse- cure individuals in the entire state.

Based on Feeding America’s Map the Meal Gap data from 2015, Gadsden County, with a population of 46,424, had a SBoth Farm Share and Second Harvest are meeting the food insecurity rate of 24.6 percent. This percentage equates to more than 11,000 peo- ple in Gadsden County who lack consistent access to healthy and nutritious meals.

“It’s really hard to meas- ure hunger,” Minor explains as he points out Gadsden County’s placement on the Map the Meal Gap charts. “But we can put a number on food insecurity.”

Those experiencing food insecurity were worried about food running out; could not afford balanced meals; were forced to cut the size of meals or skip meals; were hungry but could not eat, lost weight; and sometimes were un- able to eat for whole days several times a month.

“Ironically, many who suffer from food insecurity are obese,” Minor continues. “When you don’t have consistent access to healthy food, you fill up on empty calories, which contributes to a whole host of health effects. [For example,] seniors with food insecurity are more likely to have diabetes or heart attacks. Children who live with food insecu- rity have difficulty focus- ing in school, undermining their potential.”

“It’s a great investment to make sure children get balanced, healthy meals so that they get a good start,” Minor said. “Often, the healthiest meal these stu- dents get is the one they get at school.”

The Backpack Program provides more than 800 bags of food every week to six counties, including Gadsden. The food in the bags is meant to supple- ment six meals for chil- dren during the weekend when they do not have ac- cess to meals in the school cafeteria.

Similarly, when school is out of session for the summer, the Summer Food Program provides meals and snacks to children

There is also the After- school Meals Program, which feeds children at local community centers and churches every day after school from August through June.

At the other end of the lifespan, the elderly are also often at risk for food insecurity.

Second Harvest’s Senior Grocery Program helps feed the elderly at the end of the month when their finances have been ex- hausted. More than 700 seniors in the Big Bend area are served each month through collabora- tions with churches and Elder Care Services.

Second Harvest empha- sizes the importance of healthy fruits and vegetables through donations from farmers and their own community garden.

The lack of access to fresh food can sometimes lead to a reliance on processed foods, with many people unsure how to prepare the vegetables they are given.

The organization em- ploys a dietician to “antic- ipate” upcoming crops and develop easy recipes to hand out along with the produce in an effort to educate and inform.

Backyard gardeners, master gardeners, and community gardens — as well as regional and national growers and farmers — donate their fruits and vegetables to Second Harvest. The organization also grows thousands of pounds of produce in its own garden.

This year’s goal for the Jefferson County site, pro- vided through generous donations from local benefactor Edwin Lott, is 20,000 pounds of pro- duce.

Farm Share also strives to influence food-insecure families to eat more healthfully. Founded in 1991, Farm Share is a Florida-based food bank and charitable packing- house that specializes in getting the state’s farmers to donate their fresh fruits and vegetables.

Farm Share’s mission is to “alleviate hunger and malnutrition by recover- ing and distributing” the donated produce.

Dave Reynolds opened the Quincy hub of Farm Share in 2010, operating the program alone for the first two years.

Now with six staff members to balance the work- load, they distributed more than a million pounds of food in the last month alone.

The free distribution makes Farm Share a cru- cial partner for small com- munity groups in poor or rural areas that may not have the funds to purchase food to give away.

Statewide, Farm Share gives away around 40 mil- lion pounds of food each year to families in need.

“Studies show when you bring food into a food desert, and it is given out by the police department, crime is reduced and peo- ple see the law enforce- ment officers in a much more positive way,” Reynolds said.

Farm Share has held two events in Leon County and is in the planning stages for collaboration with the Gadsden County Sheriff ’s Department.

While distributing food mostly through its 233 partner agencies, Farm Share holds spring and fall events where food is given away directly to individu- als who need it.

In addition to giving away about 100,000 pounds of food during the four-hour events, health screenings are provided and information is avail- able from more than 30 community agencies.

Also this spring, Farm Share is sponsoring the Stamp Out Hunger Food Drive. This national pro- gram allows residents to leave non-perishable do- nations in or near their mailboxes, where letter carriers pick them up along their mail delivery route. All donated items are then distributed to people in need living in the counties where the food was donated.

Rick Minor of Second Harvest cites high poverty rates “compounded with the rural dynamic” as a contributor to the food in- security struggles faced in Gadsden County and the surrounding area.

“Rural communities are being eviscerated,” he states. “Many young people are leaving rural areas in search of work. Losing

the younger generation disrupts the economy.”

Dave Reynolds of Farm Share concurs when asked about Gadsden County’s ranking as the most food insecure county in the state: “There is no indus- try here. It’s a small rural area that’s being kept a small rural area. There are no jobs here.”

Though rural areas are often associated with farming and the provision of food, the dearth of young people choosing to stay on rapidly disappear- ing family farms, or even in their small communi- ties, has made the elderly and children the most vul- nerable populations in the struggle against hunger.

Second Harvest and Farm Share both target these populations to help fill in the gaps for those who need it most.

Another issue mentioned by both organiza- tions is the incredible amount of food wasted in our society.

Farm Share’s website states, “If there’s a culprit here, it’s our high aesthetic standards for food. Every time we harvest 100,000 pounds of fresh tomatoes, about 40,000 pounds are wasted.”

Reynolds pushes back his camouflage Farm Share cap and gestures to a gigantic bin of yellow crookneck squash.

“If it’s too big, too fat, or doesn’t look right farmers will tend to plow it under or throw it away,” Reynolds said. “Farm Share gives them 200 per- cent of the cost [of goods sold] for donating such products.”

Pulling perfectly edible, if not perfectly shaped, squash from the bin, he smiles: “There’s nothing wrong with it.” He goes on to explain that any- thing that’s rotten or bro- ken in half will be given to hog farmers. “Nothing is wasted,” he says.

Rick Minor of Second Harvest also gleans from the paying customer’s privilege of selecting only the cream-of-the-crop from grocery store shelves.

“Sell-by” dates are not expiration dates, he points out, and each donated

item is individually checked against a large wall-mounted chart to ensure its safety.

Grocery stores must re- move items from shelves after the sell-by date has passed, but the food is still good and safe to eat.

A large portion of Sec- ond Harvest’s donated items comes from grocery store bakeries and delis that have to pull items such as day- old dough- nuts, bread and prepared sandwiches.

As the giant bin of yel- low squash gets loaded onto a forklift in Farm Share’s cavernous Quincy warehouse, Reynolds sighs, “[The state] has plenty of food, but we just don’t utilize it properly.”

He watches as another pickup truck approaches the loading area.

The men in the dark- green T-shirts effortlessly lift heavy boxes, filling the truck bed with food in the space of a few quick min- utes.

The line of vehicles, each representing a church or nonprofit agency that will distribute this food to its clients, inches forward in the cool spring morn- ing for a turn at the load- ing dock.

“It’s a well-oiled machine,” Reynolds says. His love for the work is evi- dent; his passion for the cause is apparent. “It’s the best job I’ve ever had but I wish I didn’t have to do it. I wish people weren’t hungry.”

Would you like to help? Visit its website at www.fightinghunger.org to volunteer with Second Harvest. Participate in the Stamp Out Hunger Food Drive by leaving non-per- ishable items in your mail- box on Saturday, May 12. Contact Monica at mon- ica@farmshare.org to vol- unteer to help distribute the items collected by let- ter carriers. Community organizations interested in participating in Farm Share’s health and com- munity partner event on May 4 can also contact Monica. Nonprofit organ- izations can apply to part- ner with both Second Harvest and Farm Share. Applications are available on their websites.