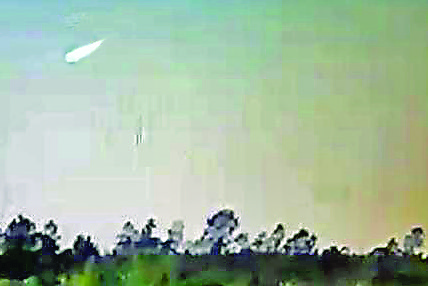 Fire in the Sky

This past Friday, the stillness of the dawn sky above Gadsden County was broken suddenly by bright white streak of light, traveling across the pale blue-gray void overhead. Dwayne Fox, operations manager at Roberts Sand Company in Quincy, said he noticed the astronomical anomaly around 7:10 a.m., Friday; thankfully, security cameras were rolling at Roberts Sand Company, and one of them captured digital footage from which this still frame – cropped and contrast-enhanced for newsprint – was extracted. Capturing the brief event on video is no doubt serendipitous, but the grainy security footage belies the intensity of what witnesses describe as a “fireball.”  According to Fox, flames could be seen “clear as day,” trailing from the nucleus. A spokesperson for the American Meteor Society said the “fireball” was most likely a meteor. He added that, although rocks, dust and even man-made space junk constantly fall through earth’s atmosphere, most are consumed within seconds, far above the ground. These momentary light trails appear as “falling stars.” Extended meteoric events like the one witnessed by Fox and co-workers Friday are exceedingly uncommon, according to the American Meteor Society.