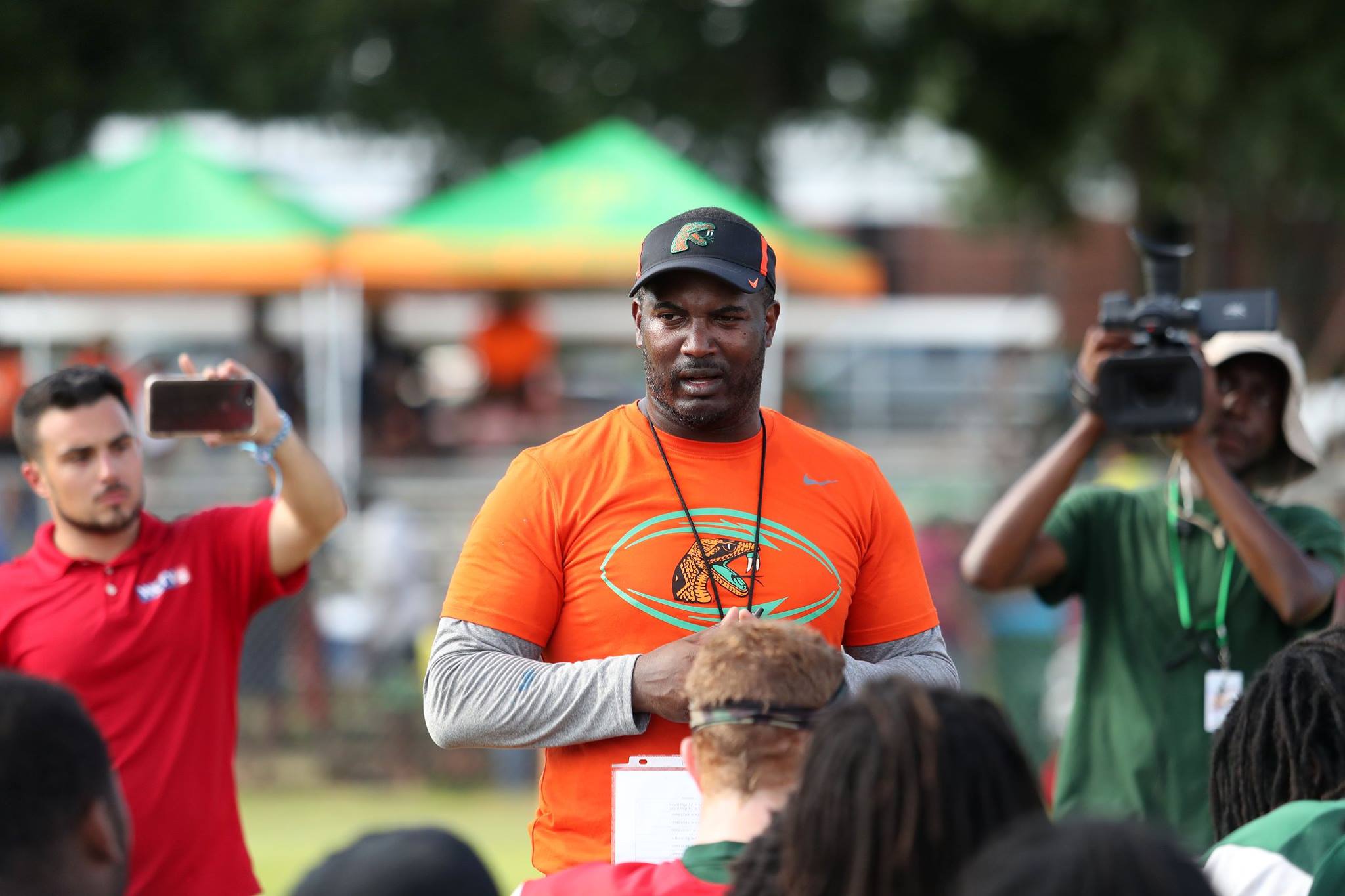 Florida A&M scrimmage as much about community as football

The team arrived to Corry Field to sirens and fanfare as Gadsden County welcomed home their team and their coach. Willie Simmons, new FAMU head football coach and his team took to Corry Field, the same field where Simmons earned the name “Shotgun,” for their first fall scrimmage.

When Simmons played on that field, it was Shanks High School’s home field and it was the center of attention on Friday nights in the fall. The school has since been re-classified as a middle school, with the opening of East Gadsden High School which serves the high schoolers that would have attended Shanks. The scrimmage was the first in a three-year deal signed with FAMU and the City of Quincy.

This is the first time FAMU has traveled outside of its city limits to hold an official scrimmage before the season. Gadsden County was an obvious choice as the residents have been very visible, vocal and supportive of Simmons and FAMU since his hire. Also returning to Corry Field was offensive coordinator/offensive line coach Alex Jackson. Jackson played with Simmon at Shanks and spent Friday nights protecting Simmons from oncoming defenders.

The atmosphere was like a block party of sorts. Vendors lined the street next to Corry Field. A well-orchestrated and organized law enforcement team kept the area secure and controlled the traffic flow. While there were 1,051 reported in the official attendance, hundreds more were in the area enjoying the festivities. Of course, the first public viewing of an organized FAMU scrimmage was an opportunity to see the changes that fans could expect this season. Simmons, known for his offensive production, saw flashes of the exciting plays he will expect for the team come September.

Starting quarterback Ryan Stanley hooked up with Dock Luckie, Kevin Newmann and Azende Rey for some of the day’s most exciting plays. Devin Bowers and Eddie Tillman showed that there will be a serious battle for playing time in the Rattler backfield. Defensively, Terry Jefferson showed his leadership. He picked off a pass and proceeded to make it into a big return. Jabreel Hazly and DeMontre Moore also excelled at stopping the run. FAMU’s specialists had a solid day kicking. They nailed lengthy field goals and showed they have the ability to guide punts for positioning.

Still, it was quite a family affair. The DJ played music throughout the game, the game announcer kept the game hyped and the fans appeared to enjoy themselves. Several faithful Rattlers traveled to the event. FAMU quarterback great Albert Chester took the ride from Jacksonville to catch a glimpse of the 2018 edition of the Rattlers. No one was more proud than the people of Quincy.

One of its favorite sons had returned in an improbable scenario that is what dreams are made of. He left Quincy, went on to Clemson, tried to come home to FAMU, ended up at The Citadel and after a few coaching stops returned to the place where he said was the only job he would leave his previous school for. With his wife, Quincy native Shaia Simmons, they have returned to a very comfortable place…home.

In the words of Simmons himself, the significance of the scrimmage was manifold.

“It means a lot for kids from Quincy to know that they too can become whatever they want to be. Seeing me make it this far in my career and be able to bring something back to where I’m from…I couldn’t have asked for a better day,” said Simmons.

It was not lost on the players either. Stanley was envious of the trip.

“To see this happen and be a part of it is amazing. I hope to one day be able to impact my home the way coach Simmons did today. It’s unreal,” said Stanley.

It took forever for Simmons to get out of the SUV that drove him to the game to the actual field. Shouts of “Willie”, “12 Gauge” and “Shotgun,” all personal nicknames for Simmons from the village that raised him, caused him to stop and acknowledge, hug and take photos with all of the people who helped him along his way.

Simmons’ smile was one reminiscent of family reunions, where that one cousin shows up that nobody has seen in a while.

Yes, there was a scrimmage on Saturday with the Rattlers of FAMU, but the trip to Quincy was so much more than that.