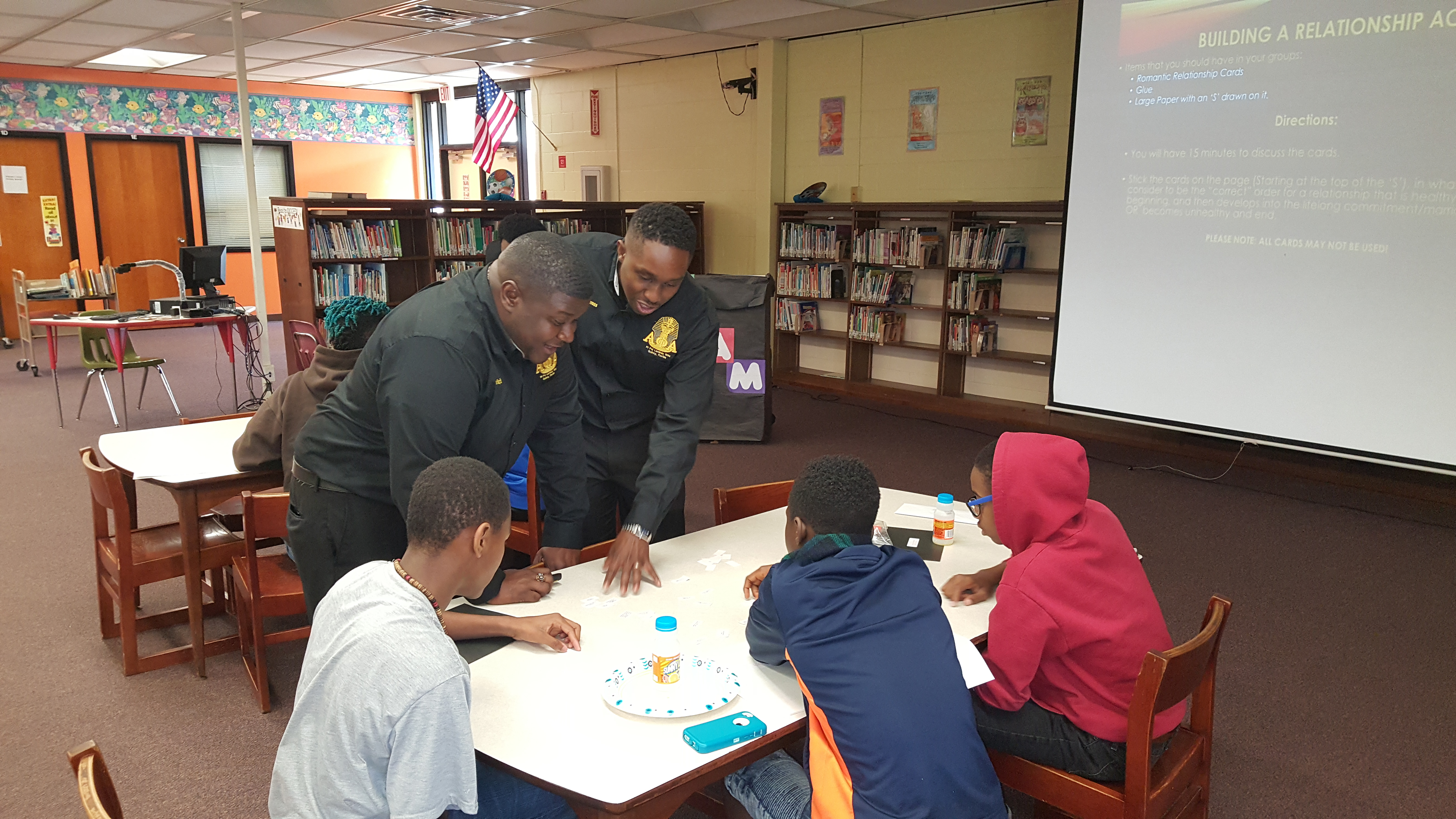 As the gloom of a January evening descends outside, seated around a table in a portable behind the School District administration building, three Quincy boys-turned-good-men gravely cite the equally gloomy statistics for youth in Gadsden County.

Dr. Darren Evans, chief of the Bureau of Public Health Pharmacy; along with Abria Harris, district math specialist for the Gadsden County Schools; and Julius Ervin, a science teacher at Gadsden Elementary Magnet School, know the alarming statistics from the inside out.

Having grown up in Quincy, they are now brothers in the Pi Psi Lambda Chapter of the Alpha Phi Alpha Fraternity, Inc.

Established at Cornell University in 1906, Alpha Phi Alpha was the first of the Black Greek-letter organizations, often called BGLO’s. BGLO’s have played an important role in the lives of young African-Americans on college campuses around the country.

The Divine Nine, the first nine fraternities and sororities for African-American men and women, provided young college students social and networking opportunities. Over a hundred years later, the bonds that these organizations created remain strong, with hundreds of college and alumni chapters all over the world.

“Their identity is largely born out of racial isolation and discrimination on predominantly white college campuses and in society, in general,” author Gregory S. Parks stated in an interview about his book, Black Greek-Letter Organizations in the Twenty-First Century: Our Fight Has Just Begun. “As such, their goals have always been the development of personal excellence (usually high scholasticism), development of fictive kinship ties (brotherhood and sisterhood), and racial (and gender for the sororities) uplift through civic action, community service and philanthropy.”

The Pi Psi Lambda Chapter of Quincy held its first Project Alpha event on January 27. This project, aimed toward middle school boys, is “designed to provide education, motivation and skill-building on issues of responsibility, relationships, teen pregnancy and sexually-transmitted diseases.”

The program, through education and demonstrations, hopes to help young men make decisions about their goals and values, building their skills through role-play exercises with appropriate male role models and mentors.

Since 1980, Alpha Phi Alpha has been implementing the Project Alpha program in conjunction with the March of Dimes Foundation.

Locally, 29 young men registered for the event, the first time it has been held in Quincy.

The need for intervention is evident here. The statistics are alarming.

Youth aged 15-19 in Gadsden County have a higher than average risk for HIV, bacterial STD’s, unhealthy weight and instances of out-of-school suspension.

“Beyond the statistics,” Harris states, “it’s about bringing awareness.”

“When I was in elementary and middle school,” Ervin comments, “teachers gave the extreme examples [of STD’s], but a lot of educational programs were taken out of schools. Project Alpha gives [young] males a forum to talk about it (abstinence, prevention, STD’s, and teen pregnancy).”

“A lot of the teens don’t think it can happen to them,” agrees Evans.

The positive effects of mentoring are well documented.

One example is a 2016 study on mentoring specifically for black male youth by the National Mentoring Resource Center which found that both formal and informal mentoring had the potential to benefit black boys in many areas, including academics, social-emotional well-being, mental health and the prevention of risky behaviors.

Other research from the study shows that mentoring that promotes black boys’ racial identity may lead to positive effects in other aspects of their lives, particularly academics.

A significant indicator was connecting black male youth with mentors who have shared life experiences.

The shared experience of growing up in Quincy is an advantage Ervin recognizes.

“This is home for us,” he says. “That’s a good thing about Gadsden County — everybody is close-knit. We want the young men coming in seeing other young black men showing them what to do.”

In the age of #Me, Too, the fraternity men also feel it is more important than ever to have an open discussion surrounding sexuality, including the “power of consent.”

Harris has spent long evenings after work researching the best ways to approach this sensitive topic with the middle school boys.

“Goodwill is the monarch of this house,” states Octavius Jackson, president of Quincy’s Pi Psi Lambda Chapter of Alpha Phi Alpha. “Our chapter is committed to providing scholarships; promoting assistance to those less fortunate; and instituting programs to provide guidance to the youth within our community. We wholeheartedly believe that our involvement can provide services to advance our community. We are excited about this journey.”

Parks summed up his feelings on being an alum: “I’m a life member of Alpha Phi Alpha Fraternity. I still attend alumni chapter meetings on a monthly basis. I still do community service through the fraternity. I communicate with my line brothers, brothers who pledged me, and brothers I pledged almost on a daily basis. Most of my personal, spiritual and professional mentors are Alphas. So, Alpha means a lot to me. It gave me brothers where I previously had none, and it placed me in the midst of men with a common sense of purpose.”

“We are servant-leaders,” says Evans. “We want to uplift as we climb.”

Harris nods. “It’s all about how we can serve and give back to our community.”

The light the Pi Psi Lambda Chapter of Alpha Phi Alpha is shining into the gloom of Gadsden County statistics is the light of hope.

They are fine role models for the future of our area.