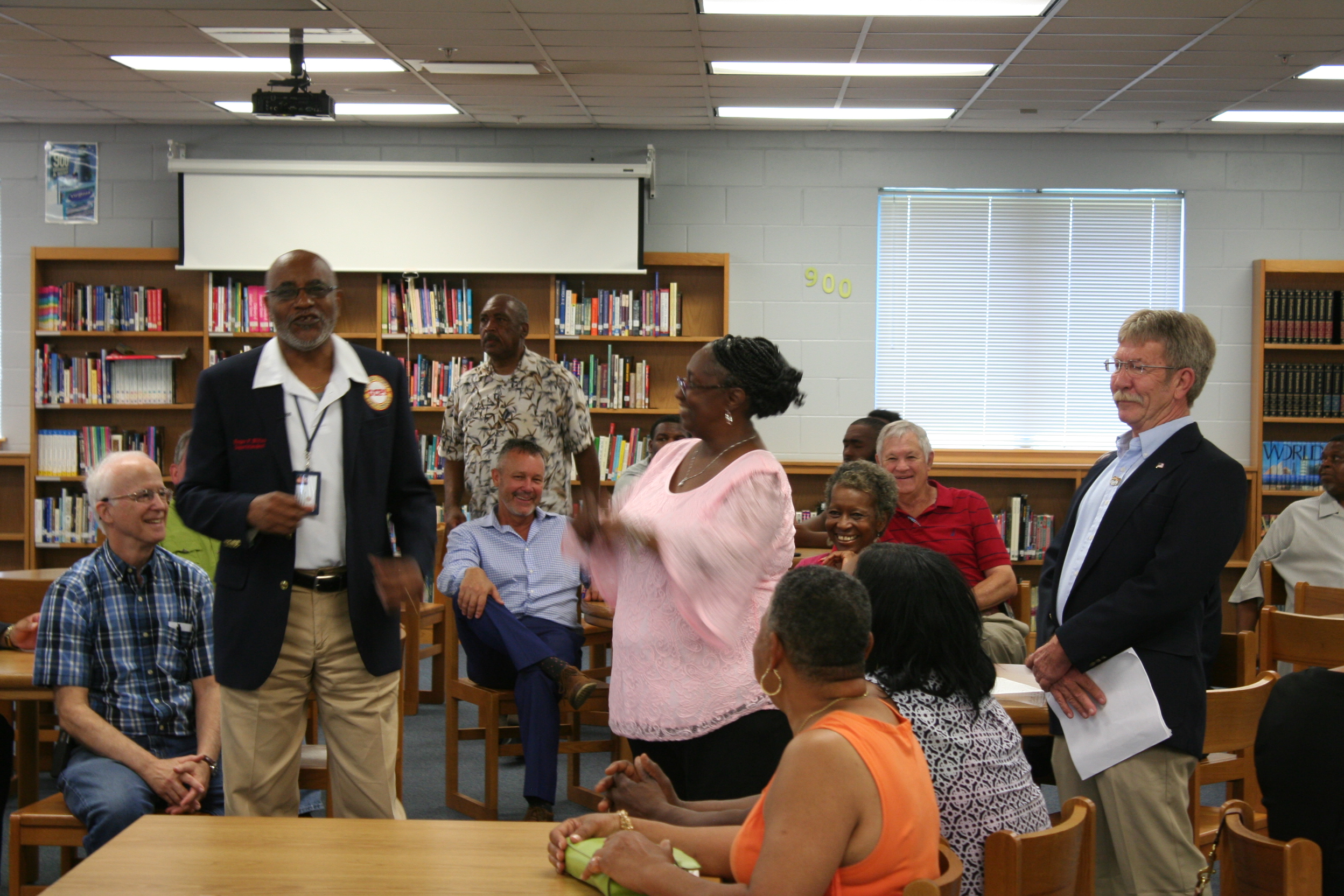 Gadsden County High earns a “C”; school’s passing state grade means it doesn’t have to be turned over to an external operator

Gadsden County High School earned a “C” grade from the state’s Department of Education this year, meaning the school will not have to be taken over by an external operator next year.

It was a joyous day in the Gadsden County High School media center last Thursday when Gadsden County School Superintendent Roger Milton made the official announcement before a crowd of about 100 onlookers, who all broke out into cheers when School Board Chair Steve Scott ripped up the contract that was in place with that external operator just in case the school earned less than a “C” grade. This was the first time in seven years that a Gadsden County high school had earned a “C’ grade or better from the state.

“I have to commend our entire community, because we have done in nine months what other schools within the state have three years to do,” said Juliette Fisher-Jackson, principal of Gadsden County High School.

Fisher-Jackson was brought in by Milton out of retirement to be principal of the school this year (in the first year East Gadsden High and West Gadsden High combined as Gadsden County High) because of her well-known reputation in turning around schools throughout North Florida.

“My ways may be a bit unorthodox, and I had my doubters and critics, but this grade proves that we got the job done,” Fisher-Jackson said.

Fisher-Jackson credits much of her success to her administrative team she brought in that had helped her turn around other schools in the past, including vice principals Keith Dowdell, Pamela Jones and Maurice Stokes. Fisher-Jackson said it was a matter of pride in Gadsden County that led her team to guide the school to the “C” grade.

“We didn’t want someone else to come in here and tell us what to do with our school,” Fisher-Jackson said. “We are all from this county and are products of this county’s schools, so we know best how to help the students and parents of this community because they are like family to us.”

Stokes said the administrative team worked many long nights, planning strategies to help students, but he said the most important element was the team’s familiarity with the community.

“We didn’t just demand that kids do better,” Stokes said. “If a student was struggling, we would reach out and contact a family members to find out what was really going on with them. Students will respond better if they know that you really care about them like that.”

Dowdell said the administrative team’s approach was summed up best in the catch phrase adopted at the beginning of the school year: “BIONIC: Believe It or Not, I Care.”

At the press conference, Fisher-Jackson officially announced her retirement again as a principal, but she said she would probably be active at the school as a consultant next year.

“We are bringing back the academic pride and the excellence in Gadsden County that we’ve been known for in the past,” Fisher-Jackson said.

Meanwhile, Scott announced that the Rensselaerville Institute from Delmar, N.Y. will remain a consultant to Gadsden County High next year, as it was this past school year. The Renssselaerville Institute was the organization set to take over next year as the school’s external operator had it got less than a “C” grade.

Gadsden County High School wasn’t the only district school to stave off being taken over by the Rensselaerville Institute.

The George F. Munroe Elementary School in Quincy, under the leadership of new Principal Ronald Peterson (who was also hired last year by Milton to turn his school around), went from an “F” grade last year to an “A” grade this year. The school had earned either a “D” or “F” grade in each of the last four years.

Peterson said it “took everyone in our school community tirelessly working together” to make this amazing turnaround in just one year.

“The best is yet to come,” Peterson said. “Keep in tune. We’re not a one-hit wonder.”

Milton said the results at these two schools, as well as those of the other eight schools in the district, should encourage parents and students who may have left Gadsden County to return next school year.

“There’s wonderful things here in the Gadsden County schools, and we want to reach out and ask you to come on back and join us,” Milton said.

For a complete list of all grades for Gadsden County schools for the past five years, see the chart below. 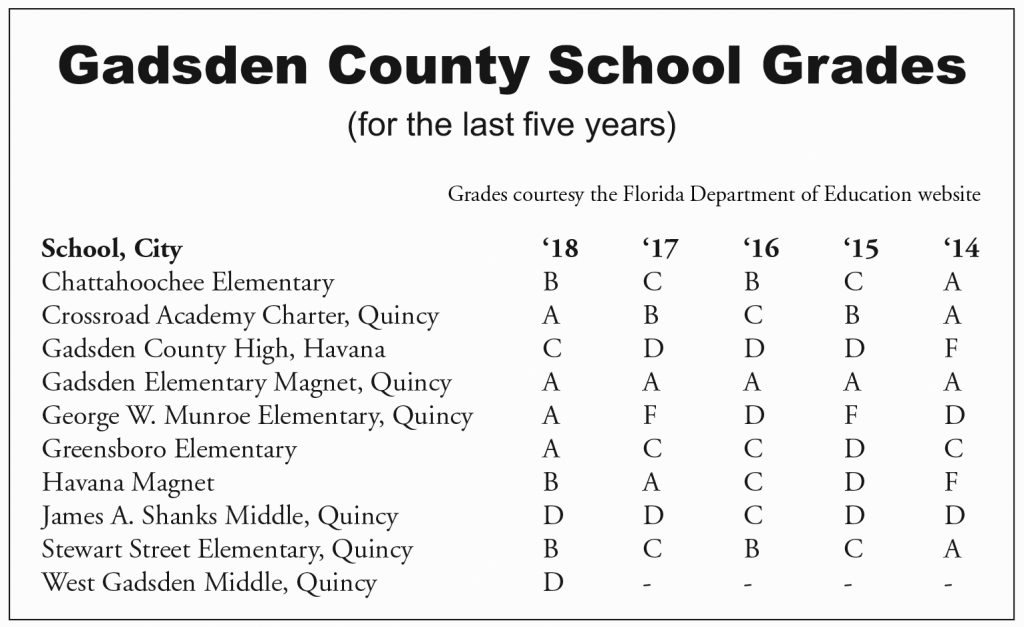 COVER PHOTO: Gadsden County School Superintendent Roger Milton speaks at a press conference in the media center at Gadsden County High School last Thursday where he officially announced that the school had earned a “C” grade from the state’s Department of Education this year after six straight years of earning a “D” or an “F.” School principal Juliette Fisher-Jackson applauds Milton’s announcement, while Gadsden County School Board Chair Steve Scott holds the contract for an external operator to take over the school (which the district would have had to put into play next year had the school earned lower than a “C”) which he would later rip up. Photo by Randall Lieberman