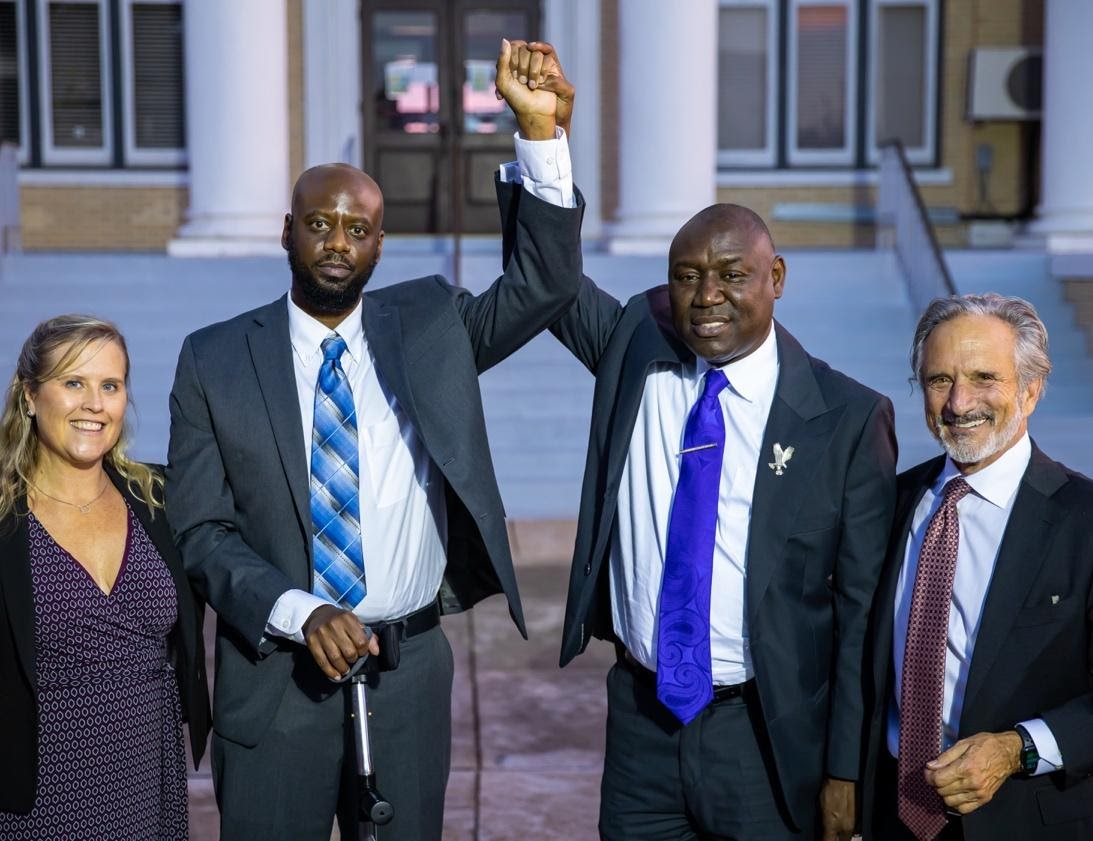 In July of 2018, a wreck that occurred on Interstate 10, just outside Tallahassee. The wreck involved over 45 vehicles, including “as many as” five semi-trucks (according to a Florida Highway Patrol officer who had responded to the scene), and gridlocked both lanes of travel on the interstate for hours.

Eight people were injured as a result of the wreck, but only one person – Gadsden County’s Dwayne Washington – received critical, life-threatening injuries.

According to Washington’s legal team, Washington was traveling home on his motorcycle, near Tallahassee, when he came upon the wreck’s 45-vehicle pileup.

Washington attempted to steer his motorcycle into the median to avoid the wreck and to prevent other vehicles from crashing into him. But before Washington could safely navigate into the median, his legal team says Washington collided with a truck that had been stopped in the emergency lane and was not displaying any lights.

“The collision with the truck launched Washington into the median and left him with severe, life-threatening injuries,” writes Washington’s legal team.

The wreck on July 24, 2018, had occurred, in part, due to stormy weather conditions as well as the speeding of a commercial driver with Top Auto, an express trucking company based in Pembroke Pines, Florida.

As a result of the wreck, Washington broke both sides of his pelvis away from his spine, resulting in a virtual paralysis that required a six-month hospital stay and intensive physical therapy.

To this day, Washington’s legal team says that he remains in constant pain, must walk with a specialized arm crutch, and is suffering from withering in his right leg.

Following the wreck, Washington reached out to the Ben Crump law firm, a nationally renowned civil rights and personal injury attorney who has also represented other nationally-known names, such as the Georgia Floyd family. Crump’s firm is known for protecting the rights of marginalized citizens through civil rights cases, personal injuries settlements, class actions, and more.

For the company’s involvement in Washington’s injuries, Ben Crump’s legal team attempted to reach a $1 million settlement with Top Auto on Washington’s behalf a year and a half ago, but that settlement was rejected by the trucking company.

“Before we filed suit, we attempted to settle for $1 million,” said Crump’s co-counsel attorney, Robert “Bob” Cox, who adds that the settlement request expired, leading Top Auto to ask for an extension as they deliberated whether or not to accept it.

Instead, after the extension as granted, the trucking company rejected Crump and Cox’s offer, launching the two parties into a legal battle that would take over a year to conclude.

The medical expenses endured by Washington’s family during his recovery and therapy are estimated at over $700,000 alone. This does not count the loss of prosperity and physical ability that Washington has endured as a result of the nearly-fatal wreck.

“This proud veteran sacrificed so much to serve our country and was a competent, safe driver who never even had a ticket while riding his motorcycle. The consequential negligence displayed by the Top Auto driver wrecked not only vehicles but lives,” Crump said.

In an unprecedented courtroom proceeding, the case between Washington and Top Auto went before a judge during a virtual courtroom that was recently held.

During the virtual proceedings, the Florida jury not only voted in favor of Washington but voted to award him a $411,726,608 in recompense from Top Auto.

The $411 million verdict has gathered national attention due to the large payoff, as well as the fact that Washington’s trial was the first virtual jury trial held in Florida’s Second Circuit Court in Northern Florida.

“This is a landmark case, not just because the $411 million verdict was one of the largest in virtual Zoom trials the United States,” says Crump, adding that Washington’s case will be remembered for its proof of citizen access to Floridian courts of law. “It demonstrates that even with the current COVID-19 pandemic, our citizens have access to their courtrooms and to justice. People all over America are talking about this trial.”

The recent attention brought about by Washington’s case has also created discussion from professionals on the large amount of money that is now due to the victim, especially considering that Top Auto has since lost its operating status. This has caused several critics to state that it is unlikely Washington will ever see the full $411 million payoffs owed to him.

But Crump says they are not finished making sure justice is paid in full to Gadsden County’s Dwayne Washington.

“The ‘experts’ also said that a black man from Quincy would be unlikely to connect to a jury through Zoom,” said Crump. “We will be demanding full compensation for this verdict, just like we demanded full justice be given to Mr. Wasington. That’s all Dwayne Washington wanted, full justice.”

According to Cox, Washington had left his career in the United States Army in order to spend more time with his three teenage sons.

Cox says that Washington was an engaged father and was involved in his sons’ athletic lives – something that the wreck has since taken from him.

“I think that is what troubles him the most,” said Cox. “He was active in his children’s lives.”

Now, Washington walks with assistance from a specialized cane and faces chronic pain from injuries sustained during his collision.

“In Gadsden County, he was truly known as Sergeant Washington. He was admired and respected by so many. But Sergeant Washington died that day on the side of the road,” said Crump. “He has been left with a shell of himself as he figures out his new purpose. It is devastating. He was the provider of his family, and now he has to depend on others.”

The $411 million verdict ensures that Washington and his family will be taken care of for years to come and makes a statement to other drivers on the importance of safety laws.

With the case now concluded, Crump and Cox offered praise to the Floridian legal system that made Washington’s virtual courtroom possible.

“We are all proud of Gadsden County,” said Crump, especially thanking the work of the Gadsden County Clerk of Court’s office for taking what he called a “vested interest” in seeing justice prevail.

“Everyone worked efficiently to make sure one of their citizens, all citizens, have access to the courts,” said

While this courtroom win for one of Gadsden County’s own does not bring back the physical ability he lost, the six-months spent away from his family in a hospital, or the trauma of nearly dying by the roadside, this verdict does ensure that Washington will be able to move forward with his life as he finds a new purpose.

“Mr. Washington may never feel physically comfortable again, but this verdict ensures that he will be well taken care of and his family will be financially secure,” Cox concluded.

Published in Accidents and Community