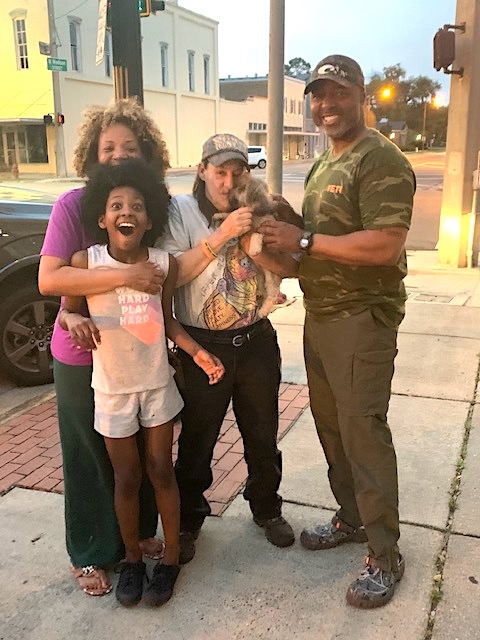 On Friday, March 26, DeeDee Moore was involved in a vehicle accident; traveling with Moore at the time was her small Shih Tzu, named Bella.

The Gadsden County Sheriff’s Office reported that in the aftermath of the wreck, which took place near the intersection of Highway 90 and Selman Road (east of Quincy’s city limits), Moore’s dog jumped out of her arms and ran away from the scene in fright.

“[Moore] was in a traumatic traffic crash, and in the midst of all that chaos, she had Bella under her arm,” said Anglie Holmes, the public relations manager for the Gadsden County Sheriff’s Office via a Facebook live video. “In some way, the dog got loose,”

In an effort to reunite the owner with her lost pet, the sheriff’s office placed an announcement on their Facebook and media list, advising that members of the Gadsden County community should be on the lookout for Bella.

According to Holmes, the community responded to the lost dog alert in a multitude, with countless volunteers turning out to personally search for Bella, and many others sharing the alert on their social media accounts.

Throughout the night, and into the early morning hours of Saturday, March 27, volunteers continued to search the area for Bella.

One such volunteer was Judy Du Bois, of Du Bois Dog Rescue (a Tallahassee-based rescue, rehabilitation, and rehoming service for dogs in the area) who says she didn’t turn in for the night until after 3 a.m.

Another volunteer for the cause was Shalani Robinson and her mother, Shanterica; the mother-daughter pair searched for Bella alongside other volunteers, and eventually were the ones to find the small, frightened dog.

According to Shalani, she and her mother returned to the area of the traffic collision, and it was there that they spotted Bella emerging from a roadside drainage pipe.

According to Du Bois, finding a lost dog in the same general area where it went missing is a common occurrence.

When searching for a lost pet, especially a dog, Du Bois states that it is important to not get a lot of people chasing the dog, but to casually comb through the area where it was lost and allow the dog to peacefully return to its original location.

This tactic, Du Bois says, is one that obviously worked in reuniting Bella with her owner.

After being reunited with Bella early Saturday morning, Moore expressed her gratitude to the community for their support.

“I am so happy! I appreciate all the shares on Facebook,” said Moore. “I really, really, appreciate it.”

“Thanks to Judy Du Bois and all volunteers for just taking the time out of your busy schedule just to look for her,” added Holmes, on behalf of the sheriff’s office.

According to Holmes, Bella was returned without injury to her owner – unscathed from both the wreck and the night on her own.