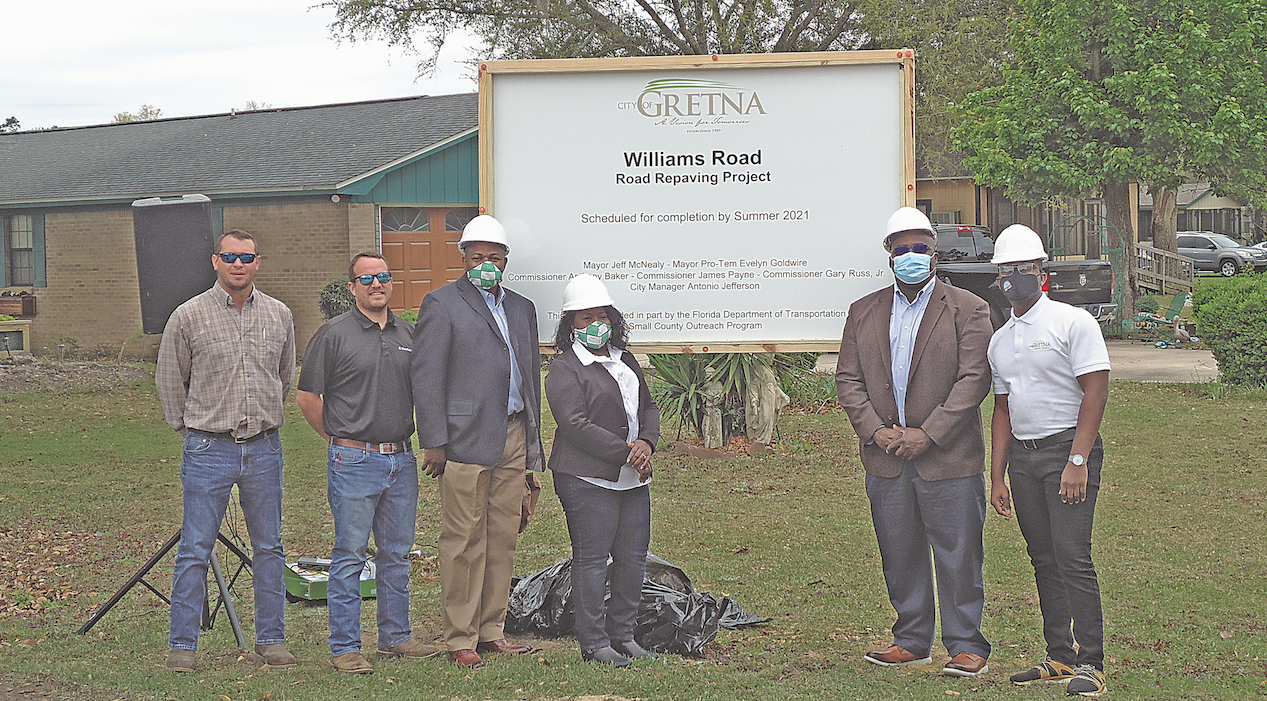 On Monday March 22, the Gretna City Commission and staff were joined by representatives of C.W. Roberts Contracting, Inc. to conduct the groundbreaking of the latest $312,000 road paving project for Williams Road.

“Another great day in the city of Gretna” said the Gretna Mayor Jeff McNealy at the commencement of the ceremony. “Something that we as commissioners always try to make sure that we do is make sure that we keep roads paved.”

With an overall investment of just over $1 million, the paving of Williams Road is the Gretna City Commission’s 11th roadway paving/resurfacing in the last four years.

“Thank you again for your hard work and dedication to making sure that this big city of Gretna is a vision for tomorrow,” said Commissioner Gary Russ, Jr. “It’s a pleasure to see the hard work that these individuals have put forth to make sure that we are properly prepared and secure to be that vision for tomorrow.”

Russ added that infrastructure had become one of the pillars he considers important in the growth and sustainability of the community.

“It’s such a pleasure to see how Gretna is progressing,” said Mayor Pro-Tem Evelyn Goldwire. “And like they always say, behind every great man or woman is a great organization and I thank Mr. Jefferson and his staff for the work that they do along with Justin and his engineering group.”

Goldwire said it is a pleasure to have people working in the city pressing forward to make Gretna greater.

“And again, I just want to say thank you to the great citizens of Gretna,” said McNealy in his closing remarks. “Without you all, we wouldn’t most definitely be able to make this possible. So with that City Manager, Commissioners, let’s move some dirt.”

According to Commissioner James Payne, Williams Road was paved more than 20 years ago and with the new project it will undergo resurfacing desperately needs. The road has several potholes and some areas are rough.

Payne added that the project means a great deal to the city because it fulfills the promise of giving the citizens a better quality of life.

In a release last Monday, City Manager Antonio Jefferson said, “my team of dedicated public servants work extremely hard each year to facilitate community improvements while working within the city’s existing resources and without raising taxes or user fees.”

According to the, the project is mainly funded through a grant from the Florida Department of Transportation as part of the Municipal Small County Outreach Program.

“We appreciate the technical and financial assistance of the Florida Department of Transportation, and our residents as well, for their support and fortitude as we continue our community-wide collaboration to “Rebuild Gretna One-Brick at a Time,” added Jefferson.

C.W. Roberts Contracting is expected to complete the project by summer 2021. This project follows a commitment made by the Commission in 2010 to pave at least one road per year.