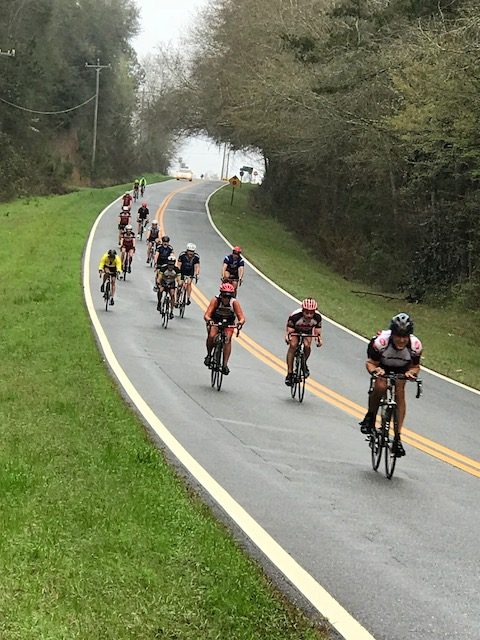 Nearly 100 bike riders from across the country gathered in the streets of downtown Havana early Sunday morning, readying themselves for a big league bike ride with a small town charm.

Its organizers hope that because of the fair weather, and the steep hills, they can turn Havana into a destination for cyclists across the country.

The course meanders through the picturesque back roads of northern Gadsden County and southern Decatur County (Georgia).

One thing for sure is that this event is for serious bicycle riders only. Those participating had to be experienced enough to endure the distance they chose to ride.

“One of the big things we’ve had as a problem in Havana is trying to make it a destination place,” said Terri Paul, owner of the local Wanderings furniture store, where the event was hosted. “We need some type of hook. We don’t have a beach, we don’t have a lake, we don’t have a mountain.”

“But what we do have are some of the nicest roads around here, as far as the hills and all that,” Paul continued. “So even without advertising it, we’ve started to get cyclists coming in for the ride.”

According to Paul, using Gadsden County’s natural hills to its advantage would increase business in the county dramatically.

“But we’ve got to get you here to see it,” she continued. “And so we’re hoping this will bring the people. If I can get them here, my town can sell itself.”

Cyclists came from as far as Maryland to ride in the Havana Hills ride Sunday.

One couple made the trip down from near Atlanta, Georgia to visit their hometowns.

“We’ve always tried to support efforts to build a cycling community here in Havana and Gadsden County,” Register said. “I think it’s really helped the downtown merchants in Havana to get the word out about Havana itself, and that it is becoming a more bike-friendly community.”

“People can come from anywhere and experience the ruralness of Gadsden County, and the beauty of Gadsden County at the same time,” Register continued. “Hopefully they’ll come, do the bike event, and come back for future events that may or may not be bike-related.”

Register, who has been riding for more than 25 years, says his reasons for riding range from the health benefits of exercising to cutting the emissions rates from cars.

It has one other important effect on him, though.

“I think it gives people a sense of accomplishment,” Register said. “It’s about allowing people to be able to get out and push yourself mentally and physically, and knowing that you can do it at the end. “And then afterwards, it’s about being able to talk to others about it, what you saw on your ride, how you felt, and position yourself for future rides,” Register continued.

While it may bring new additions to the community, according to Sisario, it also seems to be strengthening the bonds of those already here in Havana Sisario said. \“I think it brings the community together,” Sisario said. “You’ve got everyone here supporting and working to get people registered and organize this event, and it brings people together.”

According to John Dunn, the event’s creator and a resident of Havana, this sense of community spreads naturally because of the communal state most cyclists share.

“We all share the same possibility of not coming home at night, but we still do it,” Dunn said. “We’re sharing the same road and the same good time.”

Dunn, who has been bicycling for more than 38 years, was a chiropractor who started cycling to cure his own back pain.

After having a practice in Italy, Dunn chose Gadsden County as his retirement spot and the venue for his event.

“This place is just so unique, so beautiful,” Dunn said. “In the east side of Gadsden County, people get in a race to see who can give a friendly wave first. We’ve always been impressed by how friendly and how nice the drivers have been, how beautiful the roads are, how light the traffic is, and also how beautiful Havana is.”

The first year of the event had 43 riders. The second year had 102 riders.

Due to another competing race on the same day in Tallahassee, the race did not quite reach 100 riders this year.

However, Dunn hopes that in the future, this ride will come to be known as the beginning of the cycling season across the country, attracting people everywhere.

He believes this will happen for one simple reason: