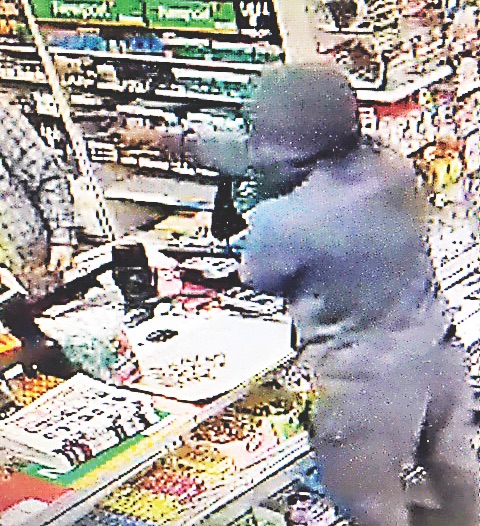 An unknown male subject robbed a Havana convenience store at gunpoint this past Sunday night, and authorities are seeking the public’s help in identifying and apprehending him.

Upon entering, the man brandished a handgun and robbed the clerk at gunpoint, then fled on foot in the direction of Ochlockonee Estates, a residential area located behind the store, a sheriff’s office report states.

Authorities urge anyone with information on the robbery to report it to the Gadsden County Sheriff’s Office. Tipsters can do so anonymously by calling the sheriff’s office Criminal Investigations Division at (850) 627-9233.

These grainy images – still frames from convenience store surveillance footage – depict an unknown man robbing a Havana convenience store clerk at gunpoint, local authorities say. The Gadsden County Sheriff’s Office needs your help identifying the hooded suspect in the footage; anyone with information on the alleged crime can report tips anonymously by calling investigators at (850) 627-9233.

Published in Crime and Havana