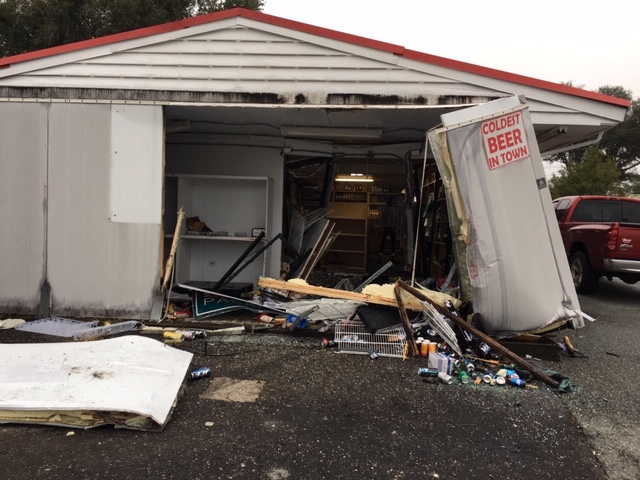 A local Havana business is cleaning up their storefront after a speeding vehicle drove through the store on Saturday, November 28.

According to a report from the Highway Patrol, a 42-year-old Havana man was traveling east on State Road 12 (Havana Highway), headed into Havana at around 11:13 p.m.

Florida Highway Patrol troopers say that the man was driving at a high rate of speed as he approached the curve directly after the railroad crossing and the driver lost control, traveling over the curb, over the north shoulder of the road and into the side of the Havana Package store.

The vehicle came to a final rest inside the store, facing east.

Prior to the wreck, troopers say that the man had already been reported as a reckless driver in Leon County, and a Leon County helicopter was observing the vehicle before the crash into the package store.

Florida Highway Patrol troopers were assisted at the scene of the wreck by deputies with the Gadsden County and Leon County Sheriff Offices, officers with the Havana Police Department, and first responders with Gadsden Emergency Medical Services and the Concord Volunteer Fire Department.

City of Havana Utilities provided additional services at the scene.

The name of the driver has been withheld by state troopers.

The report does state that the driver was traveling with a 21-year-old woman, from Tallahassee. Her name has also been withheld.

Neither the driver or the passenger are reported to have sustained any injuries.

Havana Package store declined to make any comment on the wreck.

Published in Accidents, Business and Havana