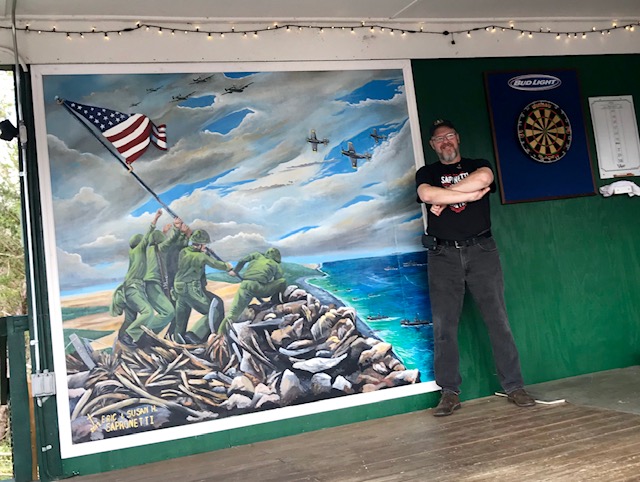 Eric Sapronetti stands proudly beside his latest masterpiece – a vibrantly colored, richly detailed depiction of  one of the most famous scenes from American military history: the raising of the American flag at Iwo Jima in the final months of World War II.

The unveiling coincided with the the 74th anniversary of the historic event, in which Marines (and one from Navy) plant an American flag after taking the crest of Mt. Suribachi, the highest point on the island of Iwo Jima. Located within heavy bomber range of mainland Japan, Iwo Jima was a critical strategic position to both the Japanese and Allied forces, and the battle for control of the small, vigorously defended Pacific island proved among the bloodiest of WWII.

The dramatic moment was captured on film by Marine and Associated Press photographers, and since that day – February 23, 1945 – it has become one of the most recognizable images in America – depicted in countless publications and films and immortalized in numerous monuments and art, like the new mural in Havana.

Concealed from view until a public unveiling this past Saturday, the impressively sized mural is painted on the back wall of the downtown Havana stage/bandstand – at the corner of First Street NW and 7th Avenue West. Contending with seasonal rain and other challenges, Eric Sapronetti and wife Susan spent, in all, approximately one week painting the stunning piece of public art – just the latest in a growing collection of murals donning the exterior walls of downtown Havana buildings. The husband-and-wife artistic duo have also contributed to other Havana murals.

Published in Community, Havana and Pictorial