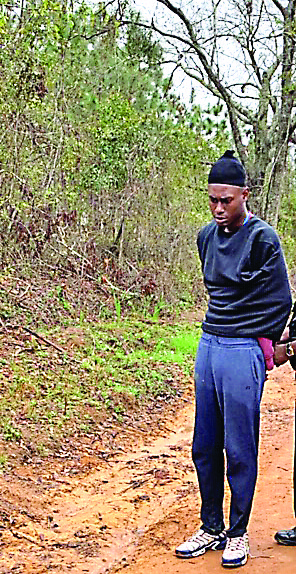 Two men wanted in connection with a Thursday morning armed carjacking at a local country store are behind bars, after law enforcement from five different agencies pursued them for hours following the alleged crime – across county and state lines, on both the highway and on foot, authorities reported.

Deputies arrested 18-year-old Deauhveon Seifuddin around 12:30 p.m., this past Thursday, February 28. His alleged accomplice, 37-year-old Freddie Strong, was nabbed less than an hour later when a K9 unit sniffed out his hiding spot in the woods off Fairbanks Ferry Road in Leon County, according to a spokesperson with the Leon County Sheriff’s Office.

The Gadsden County Sheriff’s Office initially reported there being a third unknown suspect, but later information prompted deputies to backtrack on the statement, saying only the possibility of a third suspect had not been ruled out.

Authorities said Seifuddin and Strong stole a vendor box truck at gunpoint earlier that day as it was making morning deliveries in rural Gadsden County; the truck – operated by A E Wholesale of North Florida – was loaded with hundreds of cartons of “305” brand cigarettes, according to law enforcement. The alleged carjacking was perpetrated while the truck was at a scheduled delivery stop at Seminole Convenience Store – 3780 Attapulgus Highway, north of Quincy in the Scotttown community, deputies said.

Seifuddin and Strong likely trailed the truck from its previous delivery stop to Seminole store, a Gadsden County Sheriff’s Office spokesperson said. Neither of the truck’s two occupants at the time of the alleged carjacking – both employees of A E Wholesale of North Florida, whose names have not been released – sustained physical injuries in the fray, according to deputies.

After gaining control of the box truck, the suspects fled north on the Attapulgus Highway and abandoned the truck in a “secluded area,” deputies said, adding it is doubtful the suspects had sufficient time to make off with any of the cigarettes packed in the truck’s trailer at the time of its abandonment. The duo “apparently” planned to return to the truck later to recover the ill-gotten loot, a Gadsden County Sheriff’s Office spokesperson said.  Authorities eventually located and recovered the abandoned box truck.

After ditching the stolen ride, Seifuddin and Strong continued to beat a hasty retreat north in a white Nissan Altima, deputies said. A Gadsden County Sheriff’s Deputy spotted the suspect vehicle and attempted a traffic stop, to no avail. The deputy executed a felony pursuit, joined by a state trooper with the Florida Highway Patrol, a news release states.

The suspects eventually crossed state lines into Decatur County, Georgia, and authorities there joined the chase; some time later, the suspects crossed back into Florida, striking a Georgia law enforcement cruiser and civilian vehicle along the way, the Sheriff’s Office reported. The road pursuit ended when the suspect vehicle wrecked in Leon County on Fairbanks Fairy Road, authorities said. Determined to elude the long arm of the law, both suspects then fled on foot but were apprehended a short time later, deputies said.

The suspects are currently in custody at the Gadsden County Jail on an assortment of charges. Seifuddin faces charges of resisting officers by fleeing/eluding with law enforcement lights/siren active;  robbery with firearm; carjacking with firearm or weapons; and grand first degree larceny. His bond is set at a combined $130,000.

Strong must answer for active warrants in addition to the charges stemming from the Thursday incident, according to court documents. He is charged with robbery with firearm; carjacking with firearm or weapons; and grand first degree larceny in the carjacking case. Warrants had been issued for Strong after he allegedly failed to appear for a court date in August of last year, according to court documents. The alleged missed court appearance stemmed from charges of aggravated battery with a deadly weapon and trespassing on property while armed, court records state. Because of Strong’s active warrants, a judge denied Strong bond.