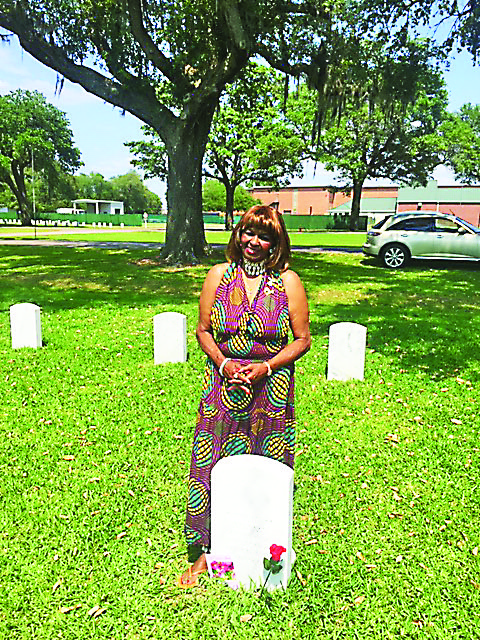 Shortly after World War II, somewhere between the sugar-white Gulf Coast beaches and the buttoned-down buildings of Keesler Air Force Base in Biloxi, Mississippi, two people fell in love.

More than 70 years later, Rosetta Rolle Hylton-Anderson is finally uncovering long-sought answers to her questions about one of those people: the mother she never knew. With the help of Quincy genealogist Freida Bass Prieto, Hylton-Anderson has found not only her long-lost mother, but siblings, cousins, nieces and nephews.

And on a recent mild February Saturday, she invited Bass Prieto and two of her new-found cousins to her home for a celebratory reunion. With her known family together for the first time she could remember, Hylton-Anderson recounted the story of how her parents first met.

The year was 1945. Wide-eyed, full of life and away from home for the first time, 19-year-old Alvin Rolle was stationed at Keesler Air Force Base when he first laid eyes on his beautiful young bride-to-be, Nellie. Right away, a romance blossomed, and Alvin wed Nellie when she was just 16 years old. Soon after the abrupt union, Alvin took his young bride down to Homestead, Florida, to live with his parents.

Alvin’s father was a strict Pentecostal minister; his mother, a devoted preacher’s wife. Both were of Bahamian descent, and neither were quite sure what to make of their new houseguest – this young stranger, already married to their son and expecting his child.

“[My grandparents] weren’t mean to my mother,” Hylton-Anderson explained as she settled back on her living room couch, “but they were never warm, either.”

Before long, Nellie returned to her family in Biloxi, taking infant Rosetta with her. The move didn’t go over well with Alvin.

“[After she left with me] my father stole me back,” Hylton-Anderson said. “He took his father’s new car and drove to Mississippi with his best friend, Tim Lee.”

Finding baby Rosetta with her maternal grandmother, the two young men took possession of the child and drove through the night back to Homestead, Hylton-Anderson continued. To avoid unnecessary stops, Lee simply tossed the baby’s dirty diapers out the window as his buddy drove, making their way south along Florida’s winding country highways.

Little Rosetta was raised in Homestead by her father and grandparents, whom she called “Mama” and “Papa.” She wouldn’t see her mother again until she was 4 years old.

Nellie had traveled to Homestead with her new husband and younger children to collect Rosetta.

“Mama [Hylton-Anderson’s grandmother] laid on the floor and cried and begged her not to take me,” Hylton-Anderson said. Given her young age at the time, Hylton-Anderson’s own memory of the incident is vague and cloudy at best; she found out about the episode mostly from family members years later.

After several hours, Nellie departed Homestead – unsuccessful in her mission. Little Rosetta remained in the care of her father and grandparents.

“No one talked much about it,” Hylton-Anderson said. “But growing up, I always heard [from family members who had met her] that I ‘look just like Nellie.’”

With her own knowledge of her mother limited to just family anecdotes and shadowy memories, Hylton-Anderson eventually decided to try and track down the woman who woman who gave birth to her. Her first such attempt came when she was 16 or 17 – “when I had got grown enough,” Hylton-Anderson recalled.

But with few details other than her birthplace – Keesler Air Force Base –  on which to base her search, that first quest to find Nellie would ultimately prove fruitless.

And life went on.

“I was loved and raised well,” Hylton-Anderson recalled, “but there were times it got into me, and I wondered about my mother.”

Hylton-Anderson went on to attend college in Atlanta and enjoyed long, successful career as a “donor community service coordinator,” working with organ donor families and recipients. She married, raised two children and was widowed.

Later, she met her second husband, James Anderson, on an online dating site. The couple married in 2013, and – upon Hylton-Anderson’s retirement from the University of Miami’s Life Alliance Organ Recovery Agency – in 2015, they relocated to Quincy.

“I think all of my volunteer hours are my way of being thankful for the opportunities of my upbringing,” she said. Hylton-Anderson currently volunteers with Life-Quest, Leadership Gadsden, the local chapter of the National Hook-Up of Black Women, the Literacy Program of Gadsden County and several other organizations. It was through her work with these agencies that Hylton-Anderson met Freida Bass Prieto – at a fateful Quincy City Commission meeting.

Bass Prieto, a genealogist since the early 1980s, was speaking to Hylton-Anderson about a genealogy program she hoped to establish for local children. When Hylton-Anderson mentioned she would love to find her own mother, Bass Prieto knew she had to help.

“My mother died early,” Bass Prieto said, “so I have a real affinity for people who grew up without their mothers.”

Bass Prieto went home that night and immediately began searching for the long-lost Nellie. Though she said she usually finds at least one clue to go on, this time Bass Prieto came up empty handed, she recalled.

“But I was determined to help this woman find her mother,” Bass Prieto recalled. “I prayed about it, and the next morning when I searched some more I found her! But unfortunately, I found her through her obituary.”

Bass Prieto relayed her findings to Hylton-Anderson; tears welled up in the local genealogist’s eyes as she recalled Hylton-Anderson’s words upon hearing the grim news for the first time.

“I know how old I am, and I knew there was a possibility she might have passed, but the little girl inside me wanted and hoped for her mommy,” Hylton-Anderson told Bass Prieto.

Smiling radiantly, Hylton-Anderson recounted the moment Bass Prieto announced she had found some of her living relatives.

“I could not believe it,” Hylton-Anderson recalled. “It is wonderful information for my son, Erron, and my daughter, Karlyn. I thank God for the family members who have allowed me into their lives!”

Cousin Shonda Hart was among the first of Hylton-Anderson’s newly discovered relatives to reach out.

“Your name has always been part of the conversation,” Hart told Hylton-Anderson at the February reunion, referring to the family stories she heard growing up, “but we just didn’t know how to find you.”

A genealogy enthusiast herself, Hart made plans to meet Hylton-Anderson as soon as possible.

Having researched and chronicled much of her known family history, Hart – who works as a licensed mental health counselor in Jacksonville, Florida – was able to help fill in many of the missing pieces in her cousin’s story.

“I do ancestry because I want to know who I am,” Hart said. “I believe everyone should know the truth and what you do with that truth…that choice is up to you.”

Hart noted that when Bass Prieto first discovered her, much of Hart’s family believed Hylton-Anderson was deceased.

Hart’s mother, Florence Hart, traveled from Mary Esther, Florida, to meet her long-lost cousin and the woman who helped her find her way back to the family.

“I met her in the Winn-Dixie parking lot to show her how to get to my house, and we hugged so long I’m sure people thought we were crazy!” Hylton-Anderson said, a smile stretched across her face. The two cousins, who had met only the day before, laughed and wiped tears from their eyes.

Florence Hart said, “As soon as I walked in her house and saw all her pictures I thought these people look just like our nieces and nephews!” As the cousins talked of their common interest in working with church youth groups, Florence Hart smiled.

“Yeah, we sisters,” she said, gleefully, as Hylton-Anderson smiled back.

And though reaching out to long-lost family members 70+ years after-the-fact has proven tricky at times, Shonda Hart said “[even if everyone is not receptive] there is still so much love. There is so much love in our family.”

Last Mother’s Day, Hylton-Anderson visited her mother’s grave in Biloxi, taking the opportunity to lay roses at her mother’s final resting place and reciting words of healing -words she “needed to say.”

“You left me in a very safe environment,” Hylton-Anderson whispered as she gingerly touched the gravestone. “I grew up in a house with much love. Thank you.”