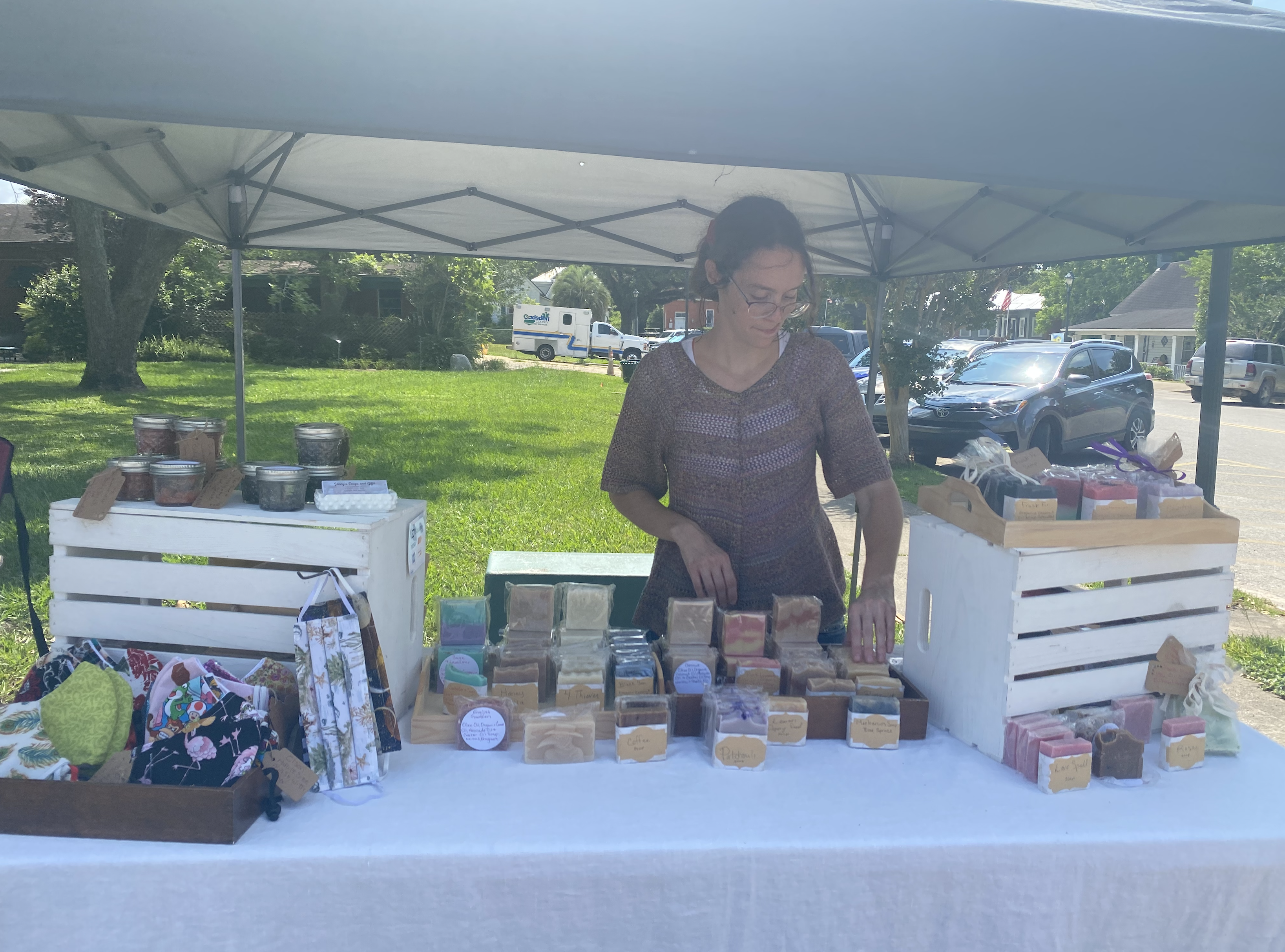 The monthly market gives a chance for local shoppers to connect with farmers and vendors from around the region.

The monthly market meets next to the Havana Fire Department on 7th Avenue East, and while vendors differ from month to month, return shoppers can usually find a selection of fresh produce, and homemade goods at the market.

For some vendors, the June farmer’s market was their first event since being in business after the COVID-19 pandemic.

Eddie Fuller of Eddie’s Fresh Vegetables came to Havana from Cairo, Georgia for the farmer’s market.

According to Ann Kozeliski, the executive director of Havana Main Street: “The community has been starving for Fuller’s produce.”

Fuller has been growing vegetables for close to 20 years, and throughout the week Fuller visits Tallahassee, Florida, and Albany, Georgia to deliver produce to different restaurants, law offices, and individuals.

While Eddie’s Fresh Vegetables are a popular booth at the market, the Havana Farmer’s Market is not limited to those selling farm-fresh produce.

Jenny Folsom of Jenny’s Soaps and Gifts was in attendance at the June market with her booth of handmade soaps.

Folsom says she began her journey as an artisan soapmaker over a year ago as a hobby.

“I have sensitive skin and needed something that worked for me,” Folsom said.

Since making soaps that satisfy her own needs, Folsom has started expanding her wares and now includes homemade masks and skin-scrubs to her inventory.

Marilyn Joyner and her son Paul Rorie are the operators of MawMaw’s Sweet Treats – a business they started after Joyner retired from Capital City Bank.

Rorie says he remembers sitting at the dinner table, eating his mother’s thunder cake, when he says he had a ‘light bulb’ moment in his head, and told his mom that they should start selling treats.

“Mom, we have got to do something,” Rorie told Joyner.

Rorie loves being in business with his mom just as much as he loves culinary arts.

“With family, you know each other’s strong points and can pick up where the other is weak,” said Rorie.

Another vendor, Vanessa Dennis, said that being at the market was bittersweet; Dennis recently relocated to North Florida after the death of her fiance, and only recently began her company – Benn Poppin.

“I wanted to move from Fort Lauderdale, and after his death nothing was keeping me there,” Dennis said.

After her move Dennis started Benn Poppin, her custom flavored popcorn company which is named after a play on words of Dennis’ daughter’s last name, Bennett.

Custom-flavored treats seemed to be a highlight of the June market, as BK’s SnowKone Factory was also in attendance at the market.

Owned by Wayne and April Jennings, the BK’s SnowKone Factory truck allows consumers to add their own flavors to the frozen treats.

But the Jennings say their mission is to do more than to keep the crowds cool with a refreshing, frozen treat – the BK’s SnowKones Factory truck delivers snow cones with a cause.

Wayne Jennings says that when he was eight years old, he told his mother that he was going to own a snow cone company – and the dream has come true.

Now, the Jennings use their snow cone truck to help organizations raise money; in the past they have donated half or all proceeds to different causes through partnerships between the Jennings and various organizations.

While the summer heat is fast approaching, Havana Main Street is eager to see the market keep growing, and Kozeliski says her organization is currently waiving the $20 vendor fee that is typically required to set up booths.

“We’re always figuring out ways we can help Havana,” Kozeliski said, adding that the waived fee will help encourage pandemic-hurt small businesses to come out to the market.

“We need vendors, then we need customers to buy the products.”

The farmer’s market is currently held the second Saturday of each month in the lot across from the police station.

Kozeliski is working on getting approval for it to move to the next lot over so there can be more shade for vendors in the summer.

Breanna Rittman – breanna@prioritynews.net
Photos by Breanna Rittman
Featured photo caption: Jenny Folsom, with Jenny’s Soaps and Gifts, was well-stocked for the June 12 farmer’s market in Havana. Folsom began making soaps over a year ago after needing specialty soaps for her own skin. Now, she offers her naturally scented and produced soaps and skincare products to customers through markets such as Havana’s.