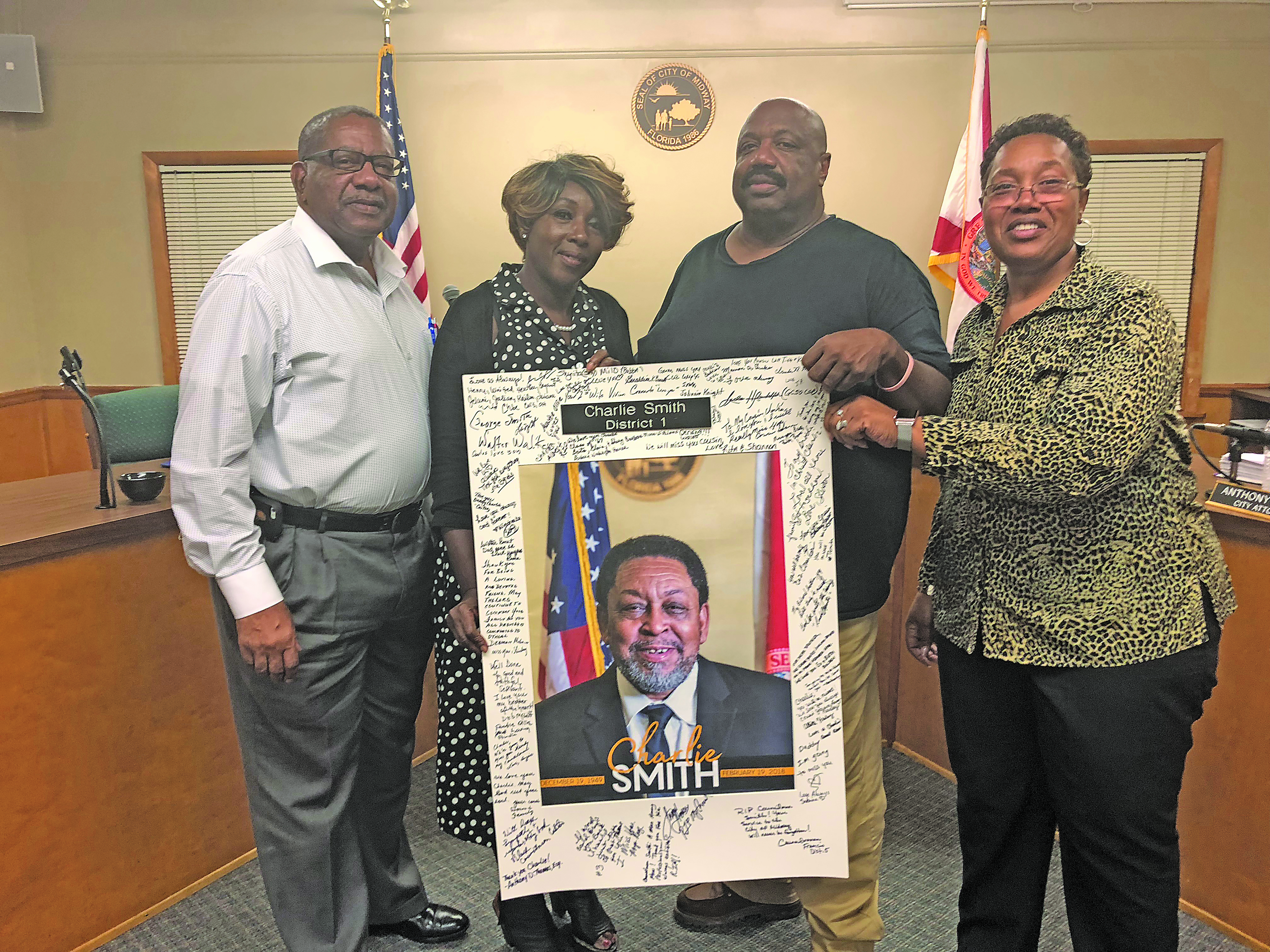 The Midway City Council had its first regular meeting last Thursday since the passing of Councilman Charlie Smith, who died on February 19. The meeting was ended with a public show of solidarity by the council members, who signed a picture of Smith and reminisced about the great man he was.

“He was a very special person,” said Mayor Wanda Range. “If I could describe him in three words, I would say he was a ‘big gentle giant.’”

“He would help anyone, and he was a trusted community person,” Range continued.

Unanimously, those who worked with him spoke of Smith as a monumental figure in his own right.

“He was a businessman, but he also was someone who was born right here in Midway in a family member’s home,” said Leslie Steele, the Midway city manager. “So he was a son of the soil. He understood everything that there was to know about Midway.”

“He was the balance for the council,” Steele continued. “Some people don’t like the big meeting drama, so they want to come in where it’s only two or three people and do a workshop, and that was what he provided for this council. He provided that balance and one-on-one touch.”

Smith leaves behind the project he was working on to create temporary libraries in Gadsden County schools until a full library can be built.

“He leaves a legacy behind,” said Councilwoman Carolyn Francis. “He was a man that stood for what he believed in, and he did not falter. If it was good for his community, he’d stand for what’s good, and he never decided to change.”

The meeting last Thursday was mostly uneventful, except for the debate over filling Smith’s seat. The city accepted applications for his replacement until Monday March 5, with the specification that the replacement be from Smith’s district.

However, a group of citizens at the meeting, led by former Midway City Manager Auburn Ford, objected.

The group claimed that the original City Charter stated that a replacement for the councilman would not have to be from his district to fill out his term, but would if they were to run again.

Ford stated before the council that the way the replacement was being selected now was based on an illegally-changed charter to the benefit of City Manager Leslie Steele.

“Leslie made a mistake,” Ford said. “She changed the charter without the citizens’ recommendation. She should have only changed the at-large voting and the district-only voting.”

Ford’s ranks included one woman who was forcibly removed from the council chambers for refusing to stop speaking. Eventually, the council announced that it would hire a professional to go over the charter and resolve the issue, which Ford has brought to court.

“Form a charter committee, get some responsible citizens to sit down and go item-by-item, get a good document formed up, submit to the secretary of state, and we’re on the right path,” Ford said.

Aside from his political career, Smith left behind a reputation as a good friend and a good person.

“He was a Christian man,” Steele said. “Anything you needed if Charlie had it he would give it to you. He knew all the right people to help anyone. And if he couldn’t do it for you, he would find someone that could.”

“He was known for his laugh and his smile,” Steele continued. “Even at his funeral, there was a smile on his face.”

Smith’s passing has had a lasting effect on the council, Steele said. Those in City Hall have had to struggle to balance mourning his death and upholding his legacy.

“It was hard that first week; it really was hard,” Steele said. “You’ve got to work, but that doesn’t mean you can’t mourn. You work but you still mourn. Charlie would want us to get on with the business of running the city and moving forward. “He wouldn’t want the city to stay in a stalemate; he would want us to move forward. So that’s what we’re doing.”