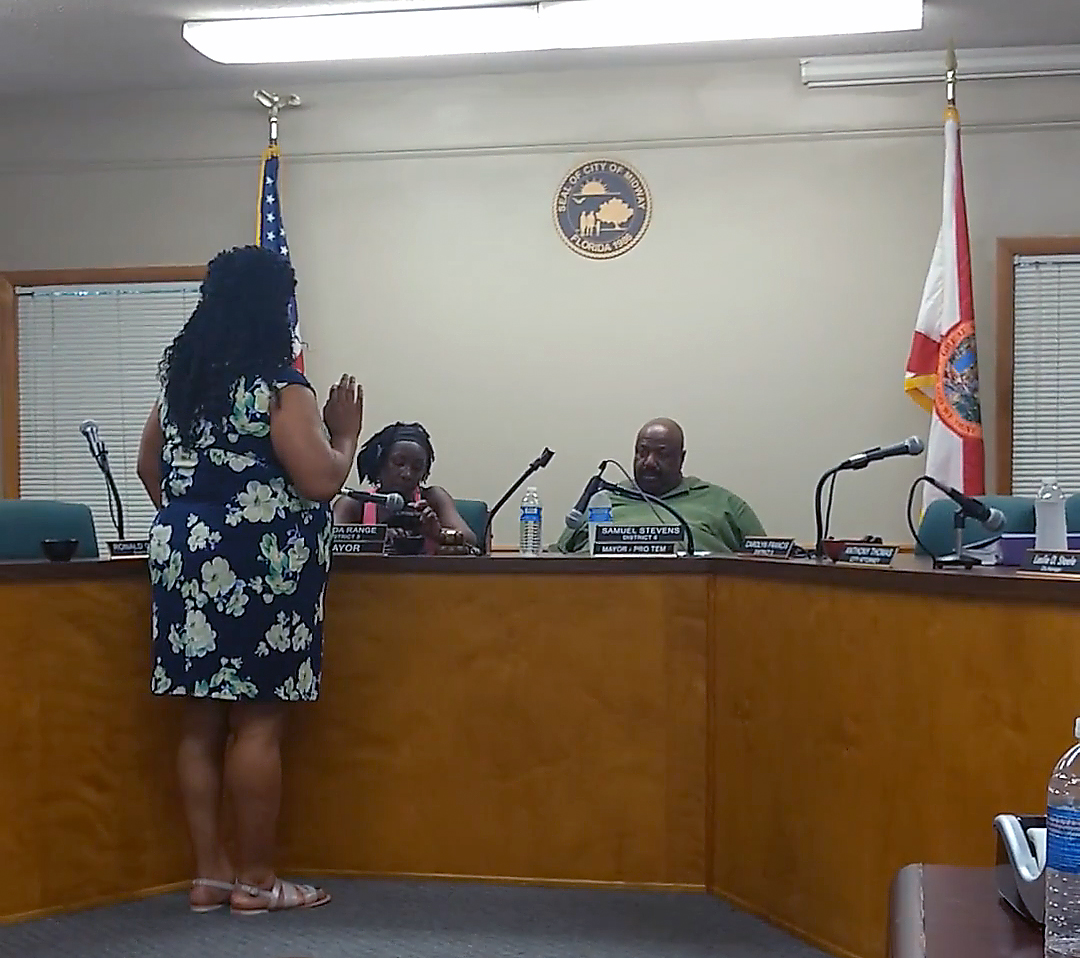 The vacant council seat was left open when Council Member Charlie Smith died while in office in February. Francis was not at the meeting June 8 and said Range and Stevens could not form a quorum by themselves. The Midway City Charter requires at least three council members to form a quorum, the minimum number of council members required to be present at a meeting for votes and other official proceedings to be valid.

The council has repeatedly tried to fill the seat vacated by the late council member Smith, but each attempt has ended in a deadlocked 2-2 vote.

Cato was one of six candidates previously considered to fill the empty seat, but she failed to garner enough votes to be appointed.

At its April 30 meeting, the Midway council held a vote on whether to appoint Cato to the empty seat. Prior to the vote, Mayor Pro-Tem Stevens asked Council Member Francis to recuse herself, arguing Francis had a conflict of interest because she was being sued by Cato.

Francis refused to recuse herself and said in April that Cato’s lawsuit was “absolutely filed just to keep me from voting. That’s my gut intuition; that’s the only thing I can think of. This lawsuit is really baseless.”

Based on previous seat appointment votes, had Francis recused herself, Cato would likely have been appointed to the vacant seat by a 2-1 vote, with Range and Stevens in favor and Council Member Ronald Colston casting the lone dissenting vote. With Francis’ additional “nay,” however, the April 30 vote on Cato’s appointment was split 2-2, echoing previous votes on the matter.

The deadlocked council voted later in the April 30 meeting to ask Governor Rick Scott to appoint someone to fill the seat.

One meeting canceled due to no quorum, another called without forming quorum

On Thursday, June 7, Midway cancelled its regular monthly meeting because too few council members were present to form a quorum. Francis and Colston were unable to attend the June 7 meeting, leaving only two council members present – Range and Stevens.

The Midway charter requires at least three council members to be present to form a quorum.

Mayor Pro-Tem Stevens and Mayor Range called a special emergency council meeting the next day, Friday, June 8. Francis and Colston were still unavailable and did not attend.

Francis said a family emergency prevented her from being at both meetings, and Colston was out-of-town at a training event. Francis added that a city employee called her that Friday morning to notify her of the emergency meeting, but she responded she would be unable to attend and Colston was still away.

Former Midway City Manager Auburn Ford, who remains active in Midway city politics, said he attended the June 8 special meeting and recorded video of a portion of it. Francis said last week that she asked Ford to attend the June 8 meeting.

Ford provided The Herald with video footage he said he recorded at the June 8 meeting. Midway does not currently produce official video recordings of council meetings.

City Manager Leslie Steele appears present in the video. City Attorney Thomas is not physically present, but the council appears to communicate with him throughout the proceedings via a smartphone held by Mayor Range. A voice believed to be Thomas’ can be heard from the phone, which was set to “speaker.”

The video appears to show Range and Stevens vote to appoint Cato to the empty council seat, and Cato being sworn in by attorney Thomas over the phone.

Prior to the vote on Cato’s appointment, the video appears to show Range and Stevens vote for and approve a motion granting check-signing authority to “all members of the council.”

Midway City Manager Leslie Steele said last Wednesday the June 8 emergency meeting was necessary because the city had checks to sign and needed signatures from both Range and Francis to process the checks.

Steele said she could not comment on the vacant council seat situation.

Council Member Francis said Friday’s meeting was illegal according to the Midway City Charter, and any business conducted therein should be voided. She said she is working with City Attorney Thomas to try and nullify actions taken at the June 8 meeting.

Last Tuesday, Ford filed a lawsuit against the City of Midway and asked the judge to issue a stay to prevent Cato from taking office.

“It was an illegal meeting. You cannot conduct business without a quorum, and the policy and procedure of the city says that. That meeting should not have been held,” Ford said. “It’s just a sad day that the city manager and mayor would stoop this low to illegally push their agenda. I’ve never seen anything like this.”

City Attorney Thomas said last Friday he advised Range and Stevens they couldn’t conduct any official business without a quorum two Fridays ago, just as he had told them the previous day.

Thomas said he “went along” with Range and Stevens’ wishes, nonetheless, and did what they asked him to do at the June 8 meeting, including swearing in Cato over the phone.

Thomas also noted, however, that all business conducted at the special meeting – including the granting of check-signing privileges to all council members and the appointment of Cato to the vacant council seat – would have to be ratified at Midway’s next regular council meeting, July 5, in order to be official.

On Monday, Ford said he had not yet heard if the judge had issued an injunction regarding the June 8 special meeting or had scheduled a hearing to discuss the legality of what happened that evening.

“I am hoping the judge calls for a hearing before the July 5th Midway meeting,” Ford said. “Because if he doesn’t, there’s going to be real chaos at that next Midway meeting if that woman [Cato] tries to take a council seat having been appointed at an illegal meeting.”

As of press time, Mayor Pro-Tem Stevens had declined to comment on the special meeting, saying last week that his ability to explain the position of both himself and Mayor Range would depend upon the status of Ford’s lawsuit, as well as the advice of the city attorney as to how much he could discuss about the proceedings.

Cover photo: This frame capture is from video footage allegedly recorded by Auburn Ford at a special emergency city council meeting June 8 in Midway. It appears to depict Quintealia Cato being sworn in before Midway Mayor Wanda Range and Mayor Pro Tem Samuel Stevens. Auburn Ford provided the video, which can be viewed at the bottom of this post.