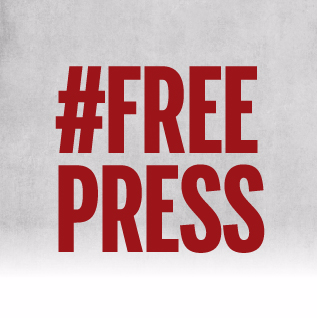 From the Publisher’s Desk: We are not the enemy of the people

Whatever else you agree with President Trump on, I hope you disagree with his labeling of the press as “the enemy of the people.”

We are not. We are America’s watchdogs. Today I am joining with hundreds of newspapers across America to take issue with Trump’s labeling of us as enemies of the American people.

In the decades I’ve worked in the news business this is the first coordinated effort I’m aware of that was intended to defend the free press from an American politician. It saddens me that it feels necessary to remind the American people that we serve you. Ours is the only profession the founding fathers felt it was necessary to protect as they crafted the U.S. Constitution.

In The Herald’s newsroom, and in every newsroom I’ve had the honor of working in, our philosophy is that we don’t want to hear anything someone only wants to tell us “off-the-record.” In almost every case, if we can’t share it with our readers, then any knowledge gained is worthless.

Our jobs are to inform you. When someone tells you that the things we report are “fake news,” they are asking you to ignore what we’ve learned and shared with you and believe their version of events, even when the evidence supports what we’ve reported.

When presented with two different versions of an event, the first question you should ask yourself is the one every journalist must ask his or herself when presented with the same two versions: What does the person or organization have to gain by misleading you? Politicians often craft their versions of events to serve their own agendas.

A good journalist learns early to ask the in-depth questions that will reveal when an elected officials recollection of events is tainted by desire to protect and promote their agendas. Good journalists also learn early that politicians whose positions you support are as likely to lie as the ones you disagree with.

Yes, we do agree with some politicians and disagree with others. That doesn’t mean that our coverage is biased, it just means we’re human. I’ve been honored to work with scores of people who have dedicated their lives to putting aside personal biases in the interest of presenting the news and the pure, unvarnished truth.

If you’re still not convinced that what the press is telling you is the truth, consult as many sources as possible and consider the preponderance of evidence. If 11 out of 12 news sources are telling you one version of events and one is offering an entirely different version, it is far more likely that the one is pushing an agenda than that the 11 are part of an elaborate conspiracy to mislead you.

Once I wrote a series of stories about a woman battling a large corporation over access to her own property that inspired an arsonist to burn down her home. In each case, I put aside whatever personal feelings I had about the subjects of my story and did my job, which was to inform you, the reader, about what was going on.

You have a right to know, and we, the press, have a responsibility to ask the questions you deserve to have answered, even if you aren’t going to like the answers. What you do with those answers is up to you.

Your job as an American citizen is to take the best information available to you and use it to guide yourselves and govern yourselves. Our job is to shine a light in dark places and show you what’s going on.

We are your watchdogs. Don’t let politicians who are afraid of our teeth convince you to ignore our warning barks.

By Mark Pettus,
Publisher
mark.pettus@prioritynews.net
Other Newspapers Participating in the Free Press