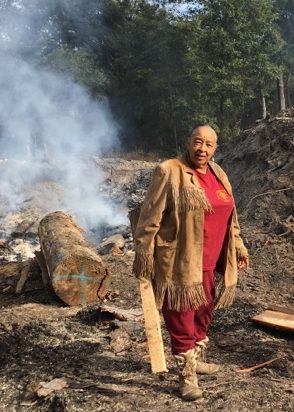 “She opens her hand to the poor and reaches out her hands to the needy.” -Proverbs 31:20

She’s an angel, Chris Henry says, his rough voice smoothed over by his depth of feeling for Smith. “Everyone in Quincy knows her.”

By everyone, Henry means the people “in the woods” – those who, for lack of anywhere else to go, live in makeshift camps scattered throughout Gadsden County. Everyone “in the woods” knows “Miss Pat” because she regularly brings them food, water and camping supplies.

She brings them intangibles, too: faith, kindness and dignity. She leads them to medical services, housing opportunities and “God’s word.” Miss Pat, as she is affectionately known, cares.

“She did a beautiful thing for me,” Henry says softly.

Formerly a Chief Petty Officer in the Navy, Henry had lived in the woods for six long years before confiding to Smith that he was tired of being homeless.

Now residing in Home Front Apartments, housing for veterans transitioning from homelessness, Henry is proud of how far he’s come.

Smith has lived in Quincy for 11 of her 71 years. She runs Pat’s Pantry out of the back of her truck, taking food and supplies to the often-invisible homeless population in the Big Bend area.

“People don’t know,” she said, her passion shining in her eyes. “People put [the homeless] in one big box. But there are all kinds of stories. If you don’t sit still long enough to hear their stories, you just don’t know.”

The story of Pat’s Pantry started with Smith losing her job. Reluctant to go home, she was driving around when she saw a man on the side of the road with a sign.

The man refused to take the money she offered, but he did accept some food she had in her van. Still emotional more than eight years after the incident, she paused, then continued, “It was the best day of my life. I lost my job, but I knew I was going to help people.”

“I got a call from this lady. She was crying,” Beigle recounted in his well-modulated radio voice. “She said ‘I just lost my job but I want to help people.’ And I thought … this is something.”

He immediately put her on the air. Listeners started calling in, asking how they could help Miss Pat. One listener from Bainbridge gave the idea a name: Pat’s Pantry. Listeners began dropping off food and supplies for Smith to deliver to the homeless. She started going into the camps in the woods.

“When they began to trust me, they showed me where they live,” Smith explained. No act is too great or too small for her to perform for the homeless – she drives them to the ER, cuts their hair, and makes big steaming pots of rice and beans when it’s cold. She rescues women from domestic abuse, finds day work for those who are able, and delivers birthday cake and balloons.

Laughing about being more comfortable in “buckskins and boots,” she gussies up to take them to church and she brings preachers right out to them. She hosts special Thanksgiving and Christmas meals at their camps.

“When it was cold, cold, cold,” Henry remembers of his time in the woods, “she would take care of us.” Smith has taken the time to sit and listen to the stories of those living in the homeless camps. When she leans back and closes her eyes to think about them, she said she sees birthday balloons fluttering, tied to a tent. She sees the delighted surprise in the eyes of a grown man who wasn’t expecting any notice on his birthday and she sees the appreciation of the gesture in the long-deflated balloons still tied to the tent weeks later.

Mother Teresa said of her work with the poor: “We think sometimes that poverty is only being hungry, naked and homeless. The poverty of being unwanted, unloved and uncared for is the greatest poverty.” Sometimes just being seen and treated with kindness can bolster the confidence of a person in need.

“We don’t judge people,” Smith said. “We just want to help them and we might be able to make a change.”

One spark of change came the day she delivered Krispy Kreme doughnuts to one of the camps. A man asked her for the top of the doughnut box, which he used to make business cards to advertise his computer skills. Miss Pat showed his card to a like-minded friend, the green-and-white Krispy Kreme logo emblazoned on the back of it. That woman, in turn, made more professional looking business cards, which led to a job, which led to a better job.

That man now lives in an apartment in Washington, where he is employed making computer and electric car repairs. The homeless in Gadsden County know that Smith sees them.

From fishing a pink pillow out of a dumpster so that she will have a place to sit during her visits, to warning her about unsafe areas of the camps, her “men” show their respect for the ways she has helped them. One day she was told not to go farther back to talk to one of the homeless men because he might be affiliated with “the KKK.”

She laughed her infectious laugh in telling this story.

She passed food to the others to give to him, and one day he sent back a pair of wooden earrings he had made for her.

Smith also helps the homeless and needy among the Creek Indian tribe in the Chattahoochee area, particularly during their annual fall powwow. Proud of her Native American heritage, Smith explained that tribal names are given according to a person’s “ways.”

Chief Jerry Lang took her aside at a powwow one day.

“Girl,” he said, “it’s time for a name.” Smith’s tribal name is Sparrow-Feeds-Her-People. Recently appointed to the board of directors at Neighborhood Medical Center, Smith is now able to expand the trust she has built among the homeless population to bring more services to t

hem, such as medical trucks with basic health screenings and first aid.

“Some people are fine out there [in the woods],” Smith said. “People aren’t going to change just because you want them to. But if you want help, I have the connections to help.”

Scott Beigle regularly prays for Smith during his radio program.

“People want to help,” he said, “but sometimes they can’t go out themselves, so they try to give to someone who can. They know she’s for real. She does a tremendous job of helping people most of us don’t see or think about. She has a real heart for people.”

Smith is quick to deflect any praise about her efforts. “It’s all God,” she said, waving her hand as if to clear the air of compliments. “It’s all about love. I just love ‘em. I just want them to know somebody cares.”

All photos by Tammy Dasher

Published in Community and LifeStyle