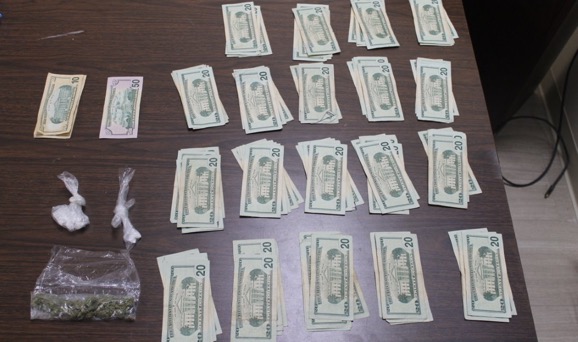 A routine traffic stop in Quincy the wee hours of Halloween night  resulted in a drug arrest and a substantial seizure of drugs and cash, Quincy Police report.

At 1:50 a.m., October 31, Quincy Police officers attempted to stop a vehicle for a minor tag violation.

The vehicle fled from police and accelerated away in the area of U.S. Highway 90 and 10th Street, according to a Quincy Police report.

Police disengaged the traffic stop attempt, only to locate the vehicle a short time later – pulling into the driveway of 725 W. Washington Street, Quincy.

Upon making contact, police report the driver, 34-year-old Quincy resident Nathaniel Price, was uncooperative and would not “show his hands and exit the vehicle.”

Eventually police were able to remove Price from the vehicle and place him into custody.

Officers “immediately began to notice the strong smell of marijuana coming from inside the vehicle,” the Quincy police report states, and a subsequent vehicle search yielded an unspecified quantity of marijuana, crack cocaine, powder cocaine, drug paraphernalia and $2,000.00 cash.

Price told police “none of the drugs” in the car were his, but the money was his “baby mama’s,” the report states.

Police arrested Price and booked him into the Gadsden County jail. He is charged with possession of cocaine with intent to sell, fleeing and eluding, possession of marijuana, possession of drug paraphernalia, and driving while license suspended or revoked.

Quincy Police ask all citizens to report drug activity by calling the department at (850) 627-7111.

Published in Crime, Quincy and Uncategorized