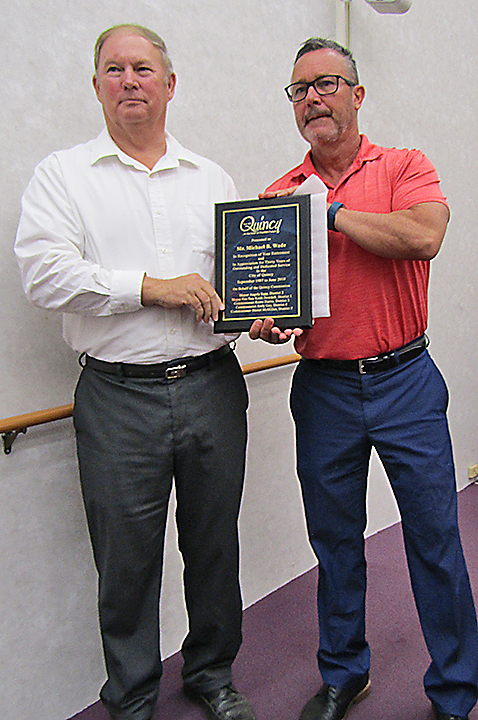 Before a packed commission chamber, commissioner Andy Gay presented Wade with a plaque, lauding his achievements as manager. Gay said Wade pulled the city out of several million dollars’ worth of debt and got all payments to Quincy vendors up to date.

The city now starts a new era with a balanced budget and up-to-date audits, Gay said, with newly-appointed interim city manager Jack McLean at the helm.

After Commissioner Gay read a proclamation about Wade’s decades of service to the city, commissioners, Gay and a packed room of city residents and staff gave Wade a rousing standing ovation.

“It was a great response for a great city manager who worked well with everyone,” said one Quincy resident, who wished to remain unnamed.

In other business Tuesday:

• Interim Manager Jack McLean briefed commissioners on a memo of agreement with the Department of Economic Opportunity that would change Quincy’s status as a “rural area of critical concern” to “rural area of opportunity.” The commission approved the change.

• Commissioners discussed the city’s policy on retirees opting in to the city’s retirement insurance, after formerly opting out. Specifically, a retired firefighter who previously opted out of the retirement insurance collective bargaining negotiations now wants to opt back in. Commissioner Daniel McMillan said at least one other city retiree had previously been granted permission to opt back in. City Attorney Scott Shirley said the city has the right to make a discretionary decision. Mayor pro tem Keith Dowdell said the city made a decision for an employee before and should, likewise, do it now.

• Police Chief Glenn Sapp asked for the removal of a large oak tree at the R.D. Edwards building that is threatening to fall on the building and/or on people on sidewalks and cars in the street. The tree is estimated to be around 250 years old, and is exhibiting changes – including splitting – that make the removal necessary. Sapp brought an arborist, F. Perry Odom, to advise the council. “As majestic and beautiful as it is, it is in a similar shape to the oak tree that devastated the Bradford Blues Club recently. Cabling the tree to hopefully prevent the tree from falling will cost around $3,500 to $5,500. Removal of the tree is about $5,000,” Odom said. Chief Sapp said, “It is a sad day for me personally. I love trees.” The commissioners voted 3-1 to remove the tree, with Daniel McMillan casting the lone dissenting vote.

Published in Government and Quincy