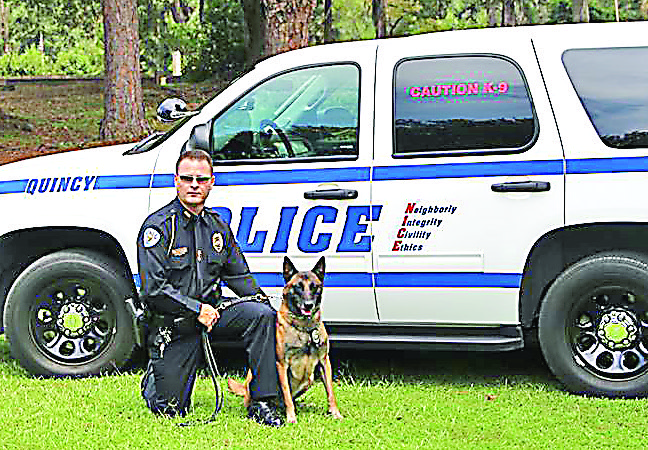 An alleged break-in at the Quincy Rec Center this past Monday night has landed a Quincy teenager behind bars, accused of perpetrating the crime, authorities reported Tuesday.

The teen, 19-year-old Quincy resident Jacoby Grimes, is currently facing two felony charges: burglary of a dwelling or structure causing damage in excess of $1,000 and criminal mischief with property damage of $1,000 or greater, according to court records. As of press time this past Tuesday afternoon, Grimes remained in custody at the Gadsden County Jail, with bond set at $2,750.

According to police, Grimes was arrested Monday night as he was fleeing the scene of the alleged burglary at Joe Ferolito Recreation Center – owned and operated by the City of Quincy Recreation Department – at 122 N. Graves Street. Quincy Police Department K9 handler and shift commander Lieutenant Eric Howell, accompanied by his canine partner “Figo,” responded to the Rec Center at 11:41 p.m. Monday night after dispatch received a burglary-in-progress notification from the facility’s security alarm operator, a Quincy Police news release states.

Upon arrival, the veteran law enforcement officer took up a strategic position at the rear of the building just before Grimes – still inside the Rec Center – attempted to open the rear door and flee the scene, police reported. Coming face-to-face with the imposing K9-cop duo, the suspect did an about face, attempting to escape back inside the building, police said. Grimes’ efforts at absconding proved fruitless, however, as Figo – a highly trained  8-year-old “police malinois” dog – made quick work of halting the hasty retreat and subduing the suspect until Lt. Howell was able to catch up to the swift pooch and safely detain Grimes, according to police.

Grimes later admitted to “smashing out a window to enter the building to steal valuables,” a Quincy Police news release states.

Authorities urge anyone with additional information regarding this case or other break-ins to call Captain Robert Mixson with the Quincy Police Department’s Criminal Investigations Unit at (850) 627-0138.