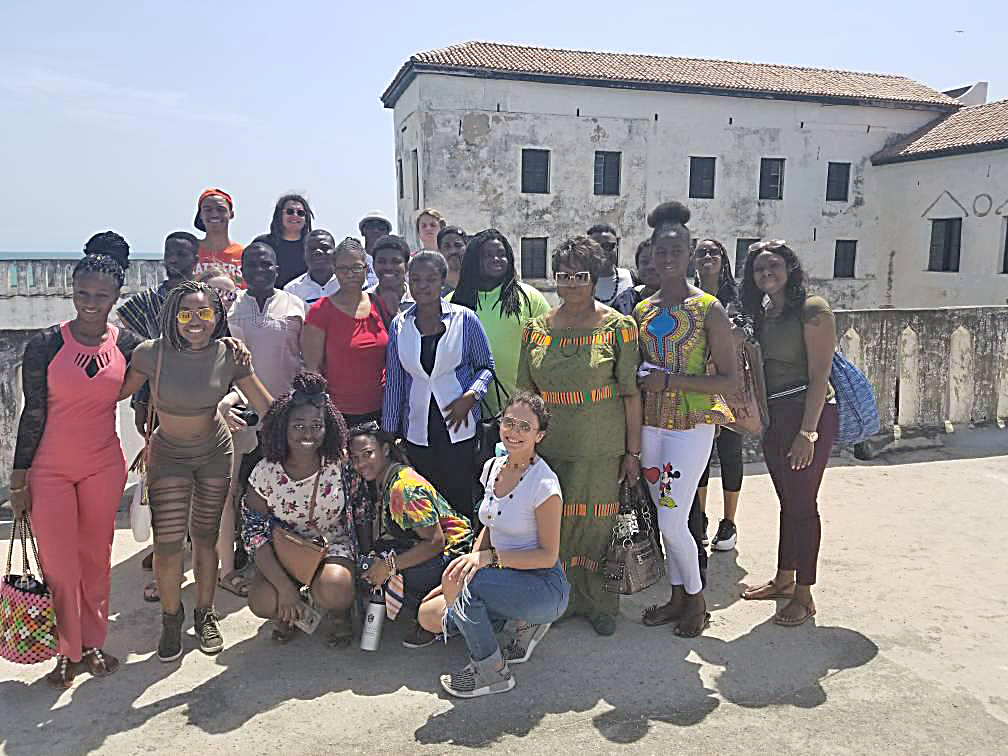 During spring break in March, eight Tallahassee Community College students took the journey of a lifetime to Dubai and Ghana on a study abroad adventure led by TCC faculty member Forster Agama.

The trip began with a long bus ride to Orlando and an even longer (15-hour) flight to Dubai.

While in Dubai, the group went on a desert safari and visited the Dubai Mall. They also visited the Burj Khalifa, which is the tallest building in the world, and saw many of the other beautiful structures for which Dubai is well known.

The next day, the group flew to Accra, Ghana’s most vibrant city. As they arrived, they drove to Ho, the capital of Volta Region, where they were welcomed by a cultural troupe and the regional minister, Dr. Archibald Y. Letsa. The minister told the group about his goals and visions not only for the region, but for Ghana as a whole, and answered questions from the visiting students.

“We asked about the advances in agriculture, their universal health care, and the growing possibilities for their youth,” said TCC sophomore Sierria Groom.

Later, the TCC group visited Ho Technical University and the University of Health and Allied Sciences in Ho, where students and staff expressed great interest in future exchange opportunities with TCC.

The students also visited the W. E. B. Du Bois Center and Museum in Accra and learned about the contributions of Dr. W.E.B. Du Bois to Ghana’s history and his relationship with the first president of Ghana, Dr. Kwame Nkrumah. Later that night, the students were joined for dinner by one of the Queen Mothers of Ghana, who are custodians of the nation’s cultural traditions. She held an open discussion about women’s rights in Ghana, and in Africa as a whole.

“What really stuck out to me was that a woman of such high stature in this country was so open with us about any issue we wished to discuss,” student Carson Gaines said.

The students also saw a more personal side of the Queen Mother when she sang for the group.

For faculty member and trip leader Forster Agama, the most poignant part of the trip was a visit to Elmina Castle of Ghana.

“Elmina has a dark history, as it is a home that played a pivotal role in housing enslaved Africans before their captors put them through the Middle Passage,” said Agama.

Beatrice Shapiro, another TCC student on the trip, agreed.

“Seeing where these people were kept and the conditions they lived in were heart breaking. The tour guide told us that out of the three million people who were captured and brought here, only one million people survived to be transported to the states as slaves.”

Kene Gamble, a TCC student, said the trip had a significant spiritual impact on her.

“Learning about this history was very heartbreaking, but it also opened my eyes to realize how blessed we have it here in America,” she adds.

On the last day of their trip, the students visited the Ashanti Adumhene Palace. The Ashanti were a powerful empire from the 1600s to 1957 that stretched from Ghana to the Ivory Coast. The palace sparkled with gold and other fine materials.

All the students expressed appreciation for the unique cultural opportunity the trip gave them.

“The overall experience has made me open my eyes to a new world and possibly in the future [to] promote changes in other parts of the world,” said Thomas. “It’s something I will carry with me for the rest of my life.”

Published in Quincy and Schools