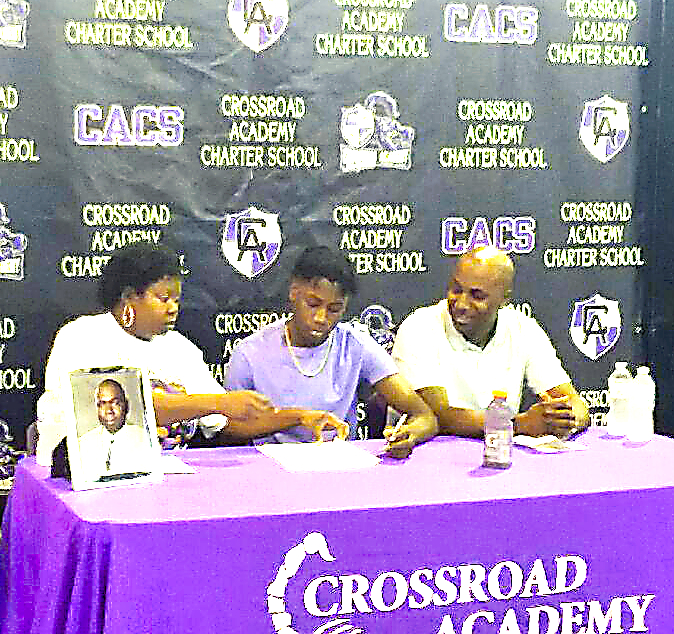 This past Friday, history was made at Crossroad Academy, as rising hoops superstar De’Onta Jones inked a commitment to play ball for the Thomas University Nighthawks, becoming the first Scorpion to sign a college basketball scholarship in the school’s history.

For all its significance in the annals of Crossroad athletics and Jones’ own career, the Friday afternoon signing ceremony wasn’t the first time the talented Scorpion guard shaped local history with a personal accomplishment. Earlier this year, Jones became the first-ever Big Bend Basketball Player of the Year from Crossroad Academy, and mere weeks ago the basketball prodigy earned a spot on the Florida Association of Basketball Coaches’ Class 1A All-State team. Starting next season, Jones will have an opportunity to make history on the Thomas University hardwood.

“I thought it was going to be over, but it’s never over,” Jones said Friday.

At the start of the May 28 ceremony, long-time Scorpion basketball coach and current Crossroad athletic director Roy Howard shared his thoughts on De’Onta’s extraordinary success.

“He is the perfect example of what we want our other athletes to come up and follow,” Howard told a small crowd of family and supporters. “We wanted to have the whole school here, but we have to abide by the CDC guidelines.”

Crossroad Head Basketball Coach Kenneth Parker acknowledged Jones as the undisputed leader of this year’s team and expressed some of his own feelings on Jones’ glowing varsity track-record.

“I am proud of him, and he deserves everything that he is receiving,” Parker said.

Jones’ mother, Shannon McSwain was visibly happy – beaming with pride, even – as she shared the significant moment with her son.

“It feels great to know the time and money spent towards his career has yielded a return. My desire for him is to graduate, receive his degree, and prepare for the workforce,”  McSwain said.

Barring unusual circumstances, mother McSwain’s “desire” for her multitalented progeny will almost certainly be fulfilled, as Jones has proven as gifted in the classroom as he is on the basketball court, working hard to graduate from his high school alma mater two weeks ago with an impressive 3.5 Grade Point Average (GPA), i.e. A’s and B’s across the board.

“I feel relieved that all my hard work paid off,” Jones said, candidly. At Thomas University – across the state line in nearby Thomasville, Georgia – the history-making Scorpion point guard plans to pursue a degree in social work.