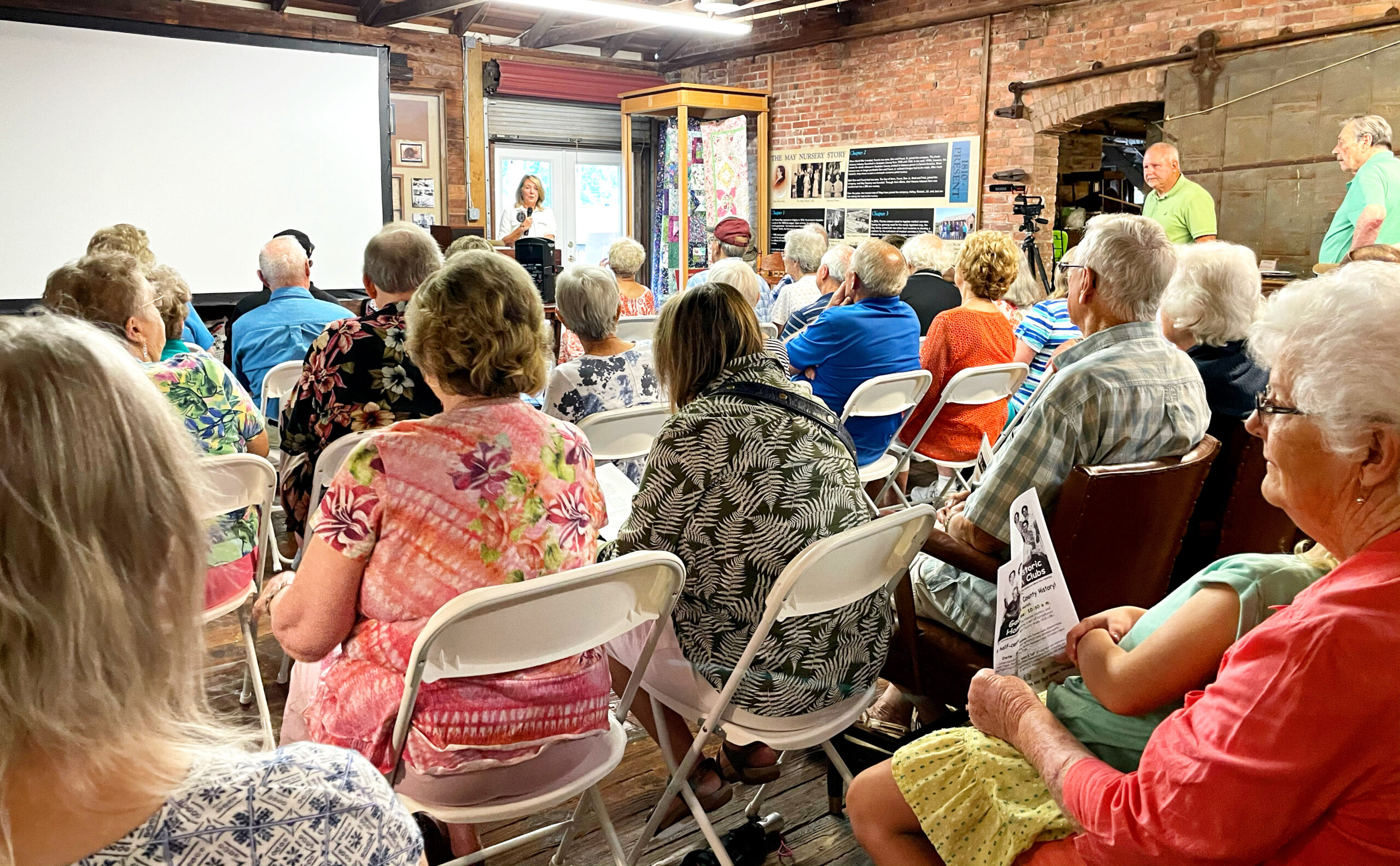 Scrapbooks preserved at Havana museum – The history of the women of Gadsden County immortalized in digital, national archives

Stories and memories of nearly half a century were shared Saturday, July 10, at the Shade Tobacco Museum as many residents from Gadsden County attended an event celebrating Florida State University Libraries’ partnership with the Havana History and Heritage Society in the digitalization of scrapbooks.

This partnership will make several of the county’s historical scrapbooks digital, and available online.

A total of seven scrapbooks were compiled by the late Elise Laffitte, one of Gadsden County’s former Home Demonstration agents.

The scrapbooks included pictures and records dating back to 1916-1961 about Gadsden County’s 4-H Clubs and Home Demonstration Clubs.

Due to their fragility, visitors were asked to wear gloves when reviewing the books during the July 10 event.

“The scrapbooks were actually rescued over 30 years ago from under the bleachers of the Quincy Livestock Pavilion,” said Carrie Durden at the event. “When we started to pull some things together for the museum, they were uncovered again.”

“Donna Warlick was pivotal in having these [scrapbooks] digitized,” added Durden.

Despite having allergies, Thomas visited the museum for the first time and evaluated the scrapbooks.

“I wanted to make sure I felt we could digitize these in a way that would make the society happy about how they would be presented but also make sure that we didn’t damage the materials during the digitization process,” explained Thomas in a pre-recorded presentation.

According to Thomas, the digitalizing of fragile paper items, such as the scrapbooks, can sometimes present multiple challenges.

After evaluating the condition, Thomas put together a project charter and after all the terms were agreed upon, the scrapbooks were transported to Florida State University.

During the digitalization preparation, five of the seven books were taken apart, making sure every page was properly digitalized and looked crisp.

Special boxes were also made to preserve the books when stored.

The July 10 event consisted of many guest speakers, as well as show & tell presentation towards the end, giving attendees an opportunity to share some of their own Home Demonstration Club stories.

There was also a pre-recorded presentation on the digitization process, and enough scheduled time to allow visitors a chance to look at the scrapbooks, as well as historic cookbooks that had been gathered for the event.

“My goal is to share the contribution of the African American Extension Agents from Florida and home economics through farming and agriculture,” said guest speaker Donna Salters, a Florida A&M University Cooperative Extension Agent/Specialist.

Salters explained the rich history behind the making of agricultural colleges and some of the most influential African American people in making it possible, including A.A. Turner, through a presentation titled “The Black Experience in Extension.”

Debunking the stereotypical image of farmers just being the people who wear overalls, Salters explained that farmers were far more than just that.

According to Salters, farmers of all races were scientists, and brilliant people.

The program’s featured speaker was former Home Demonstration Agent Shirley Clark, who spoke about her experience with the clubs and about the many contributions of Elise Laffitte.

Many others shared their own stories, pictures and artifacts from Home Demonstration Clubs of the past; one of the attendees was stunned to see many of her deceased relatives in the picture featured in the brochure page given to the visitors.

“On that board is a picture of my grandmother making this bowl in the home demonstration class,” said Penny Peacock O’Connell during the show and tell presentations at the event.

In November of 2015, O’Connell and her mother, Gwynn Peacock Kidd, saw a picture of Kidd’s mother in one of the displays of the home demonstration booth at the fair.

Noticing similar markings in the bowl from the picture to the bowl in her home, O’Connell just knew it was the same one her grandmother made.

Many visitors considered the event a success, multiple chairs were set in the room but more had to be brought in due to the turnout of people.

“You know they are doing something good when they have to bring more chairs,” said one of the attendees.

From being under bleachers to now being displayed on a national historic register, these Gadsden County scrapbooks have had quite a journey.

The scrapbooks are now available to anyone to view online.

Published in Havana and Local History