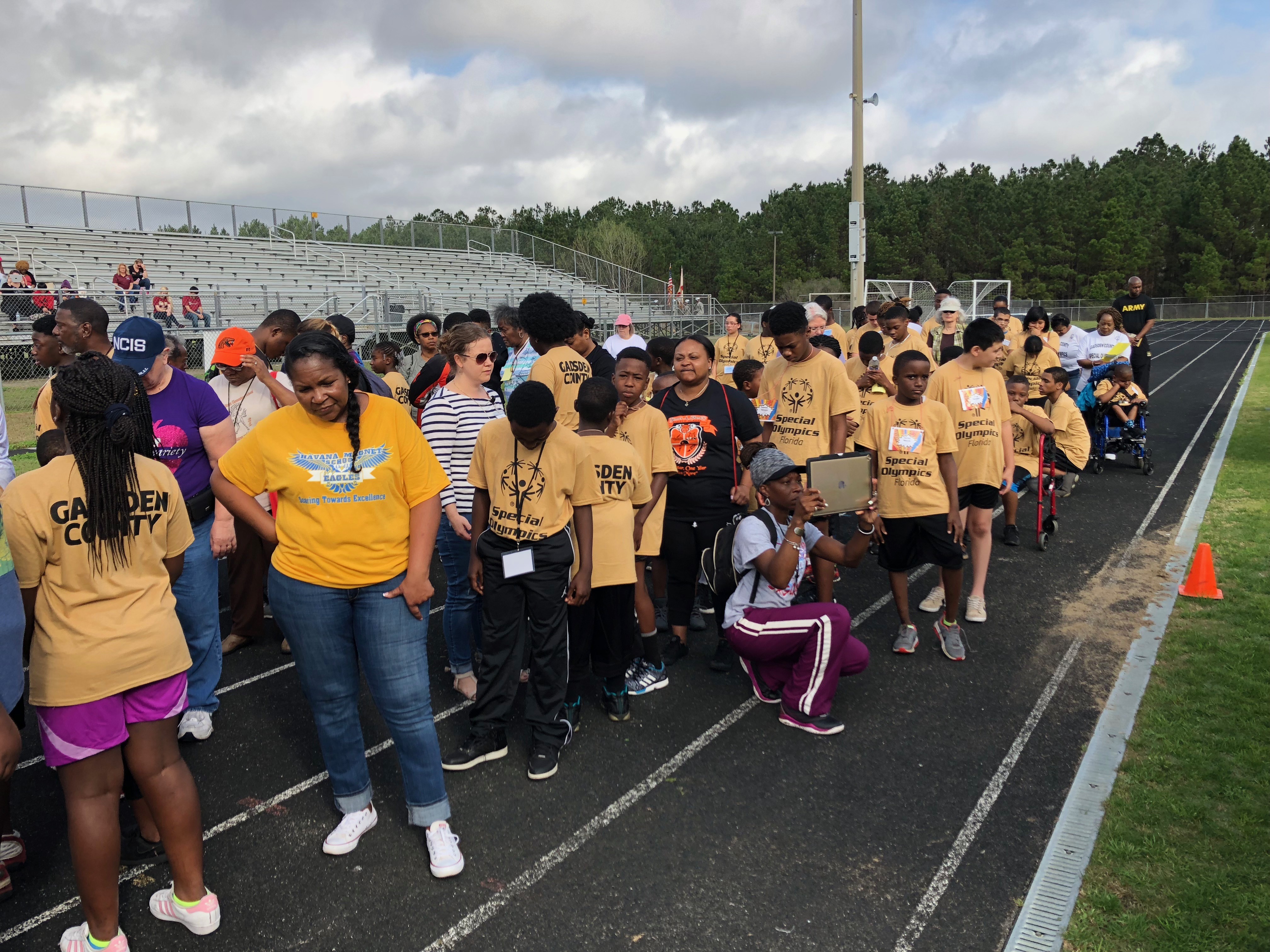 Special Olympics kicks off for year in Gadsden County

A torch, symbolizing Prometheus’ gift of fire to humanity, was lit in Gadsden County on Wednesday, February 21.

However, what that fire represented to Gadsden County’s residents with special needs was the gift of hope.

The event consisted of more than a hundred competitors — and hundreds of family members and onlookers in attendance.

The event featured a variety of athletic competitions tailored to the needs of the competitors, such as the running long jump, the 100-meter walk and the softball toss.

“Whether we are avid athletes, or victorious volunteers, or courageous coaches, or faithful fans, or super supporters — please allow us to witness today that everyone can be their very best when obstacles like stigma and prejudice and selfishness are removed and when your people, who are called by your name, are given a fair chance,” said Rev. Charles Morris, of New Bethel AME Church in Quincy, during the prayer portion of the opening ceremony.

The event, which features competitors with a range of disabilities — from those with mental disabilities to those in wheelchairs — has been internationally recognized and is widely considered to have a positive effect on those who participate in it.

“For our competitors, the general education setting may not be as comfortable; some of our students may not feel like they fit in the best way,” said Katherine Dallas, a volunteer at the event and an exceptional student education teacher in Gadsden County. “They may face challenges in the day-to-day that make it harder to be successful in certain avenues of their life, but this is a place that gives them a chance to excel and to shine; personality-wise, success-wise, talent-wise. It gives them an opportunity to express themselves in other ways than an academic setting or a home setting.”

Perhaps the most well-known competitor at this year’s event was Robert Jackson, a Gadsden County resident competing for the 46th year in the event. Jackson competed this year in the 100-meter walk and the softball throw, although he has competed in a number of different competitions over the years.

“I think it’s a good idea for the community and a good idea for the young people too,” Jackson said. “It has raised my confidence. I look forward to it every year. I get excited every time they come around. It didn’t initially have that great an effect on me, but now, as I grow older, it’s like I love it even more.”

According to Major Jackson, the principal of James A. Shanks Middle School, competitors like Robert Jackson are the reason most residents come out to the games.

“Robert goes around in the neighborhood asking people if they’ll come watch him,” Major Jackson said. “Most of the people will come here just to see Robert. I actually have about 40 students of mine here. These are exceptional students and they don’t get a chance to play many sports, and therefore I come out here to support them. All week long they ask me ‘Are you going to come watch me run?’ so I told them I would come watch them run.”

According to Major Jackson, an event like this can have a major impact on the life of a young person with disabilities.

“Although they would never get a chance to play on the regular basketball team, or run on the track, this lets them know that exercise and being an athlete is important,” Major Jackson said. “It helps them develop life skills.”

According to Dallas, the benefits of this event doesn’t just reach the participants; the community at large benefits from it.

“I think this is definitely an event that fosters community within our community,” Dallas said. “With us being such a rural area, with our schools trying to upgrade and strengthen themselves, trying to keep our students motivated, for them it’s not just a school event; it’s a family event. It’s something that serves to keep our community inspired — and people working together. It shows the heart of our community.”

Dallas, who teaches in a class for students with special needs, feels that the connection she has with her students drove her to volunteer her time to helping organize the event.

“I feel like our department within the school district is a very positive and strong and caring department, and we want what is best for our students and we all come out to participate because we want what every parent wants,” Dallas said. “They are our children, too. We want them to have success.”

However, Annie Trueblood, the event’s organizer, says the best way to support the children is to show up at the local event.

“I think if they didn’t come this year they should mark it down on their calendar for next year,” Trueblood said. “If they come and see what the kids are actually doing they’ll want to be a part of it. When you come and you see someone has a disability and they come out and give it 100 percent — that should make anyone coming to watch feel really good.”