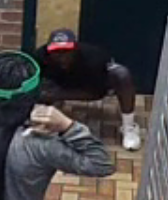 At approximately 11:36 p.m. this past Saturday, November 24, Quincy Police responded to a report of an armed robbery at the Subway restaurant at 1013 W. Jefferson Street.

An investigation determined the robber to be a black male with a blue mask, blue and red hat, black t-shirt, blue and white shorts, white shoes, and white socks, Quincy police report.

Authorities say the suspect was armed with a knife and jumped over the business counter to rob employees of the restaurant.

After obtaining an undetermined amount of cash, the suspect fled the scene on foot.

The suspect is described as approximately 5 feet, 9 inches in height, approximately 190 pounds, with a small moustache, and appeared to be “older.”

Police ask anyone with information on the identity of the suspect to contact Quincy Police investigators at (850) 627-7111.

Tipsters may also call Crime Stoppers at (850) 574-TIPS. If the information provided leads to an arrest, the reporting party could receive a reward of up to $1,000.

Quincy police are also seeking information on the identity of an unknown male who was reported to have been peering through the windows of a female’s home overnight earlier this week.

The suspect was captured on the homeowner’s surveillance system.

Anyone with any information about the identity of the suspect is asked to contact the Quincy Police Department at (850) 627-7111 and speak with Captain Robert Mixson.