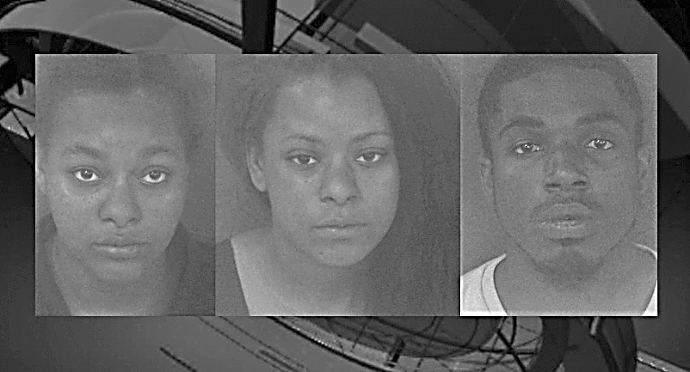 Three Quincy parents have been arrested after Gadsden County Sheriff’s Department deputies found their toddlers wandering alone in the middle of Bainbridge Highway in Quincy on Sunday morning.

Both toddlers (who are two and three years old) were soiled, dirty and barefoot.

Alexis McGriff Johnson was on her way to church when she saw the children standing side-by-side on Bainbridge Highway. Johnson immediately pulled over.

Johnson said the toddlers were about two or three steps from the road.

Johnson told WCTV: “They were turned sideways. From the traffic, honestly, two to three steps, they would’ve actually been in the road. I was shocked. It just didn’t seem real.”

“That’s something you hear about someplace else,” Johnson continued. “It just did not seem real. Just to see those little girls on the side of the road like that, my heart was just panicking,”

Johnson said the girls led her and another passerby to their mobile home on Powell Circle but nobody was home.

Gadsden County Sheriff’s deputies said it took two more hours to locate the parents (all three adults live together in the mobile home on Powell Circle).

When deputies found the children, one only had on a diaper and one looked sick, so the kids were transported by Emergency Medical Service to Tallahassee Memorial Hospital.

Sgt. Anglie Holmes-Hightower, public information officer with the Sheriff’s Office, said, “My question was when were you going to return to get your children. They actually said about 2 p.m.”

Based on an investigation, the Sheriff’s Office found probable cause to arrest the three parents. The children have since been released from the hospital and are doing well. The Florida Department of Children and Families has helped place the children in alternate housing in the care of a family member.

As of Tuesday, Angelica Addison and Smith are being held in the Gadsden County Jail on $50,000 bail, while Alexus Addison (arrested on Monday) is being held without bond.