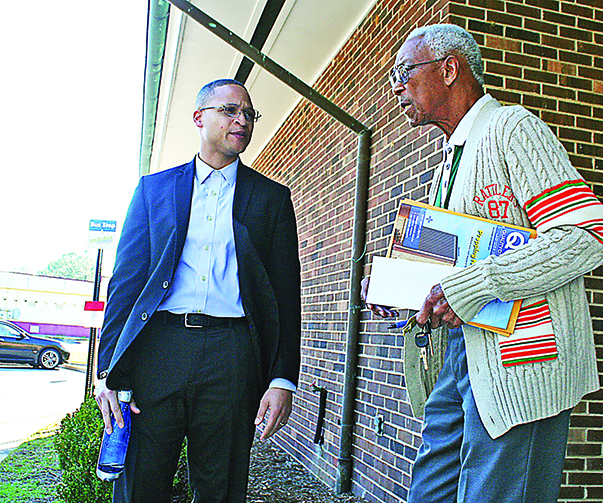 New manager getting down to town business

It’s off to the races for Havana’s newly appointed town manager Brad Johnson – the fresh-faced, fashionably dressed gentleman pictured above, opposite from Vernell Ross, Havana’s current mayor and no less than a legend among Havana Northside High School alumni and sports fans.

The contrasting pair of local leaders – one who counts his days on the Havana Town Council in the thousands, the other no more aged than Baby New Year 2020 in terms of his experience at the top of Havana town administration – mull municipal matters at the rear portico of Havana’s carob-brown, aesthetically dated town hall complex calmly, and casually, the bespectacled Johnson listening intently, thoughtfully and with a sense of pragmatic deference as the elder Ross brings the new manager, little by little, up to speed on the state of town affairs.

“The honeymoon is over, that’s for sure,” Johnson said earlier this week, following an informal hallway meeting with a Havana resident who, minutes earlier, had stopped Johnson to talk about some of the local issues weighing on his mind. By “honeymoon,” Johnson clarified, he was referring not to his enthusiasm or satisfaction for the new gig – both of which appeared to be just as intact and healthy as they were on day one – but rather the swift pace and genuine substance of his inaugural tasks as manager.

There’s just no time to dip one’s toes in the shallow end when it comes to running a city – especially when attempting to fill the shoes of a man like Howard McKinnon, Johnson’s long-serving predecessor and a well-liked, straight-shooting local leader who, by virtually all accounts, was sharp as a tack and all-around exceptionally good at his job.

By initial appearances at least, it seems Johnson is up to the task. Albeit young, he’s not without serious government administrative experience, and his pragmatic responses to questions and confident yet eager-to-learn demeanor all suggest a man fully capable of more than just maintaining the flame lit by his predecessors as he carries the town manager torch into the third decade of the 21st century. Johnson’s youthful vigor and progressive wisdom may very well prove the right fuel at the right time for intensifying Havana’s glow – ushering in a new era of light and bright ideas.