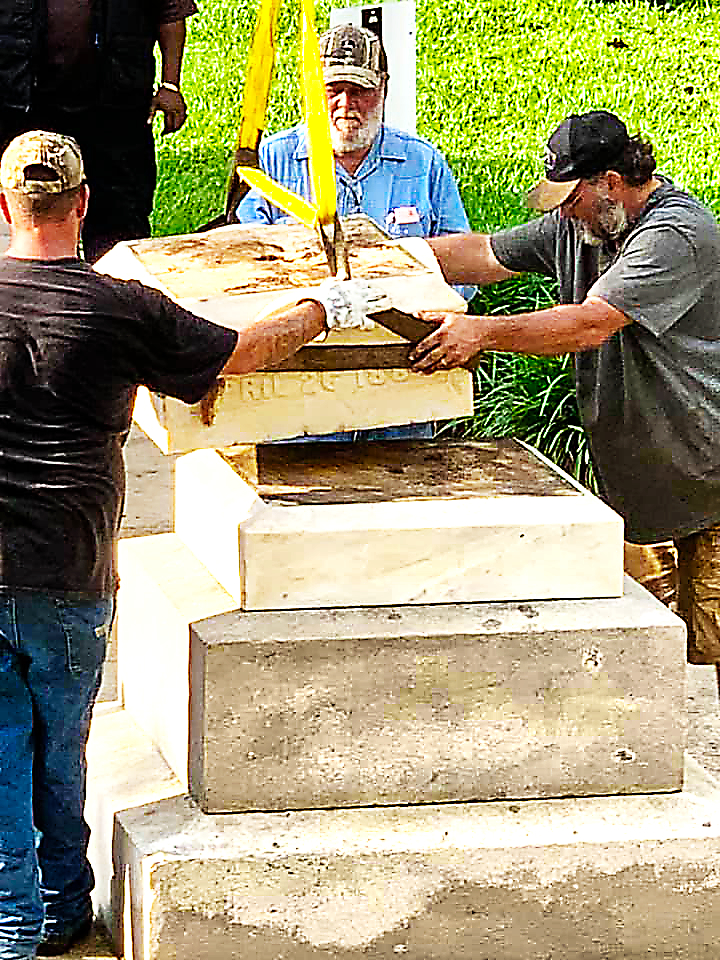 Confederate memorial hauled away from Gadsden County courthouse square, 136 years after it was erected

Last week, cranes lifted away multiple tons of carved stone segments comprising a prominent classical-style  monument that has – for more than a century – stood vigil over Gadsden County’s historic courthouse square, its inscribed text paying homage to the county’s Civil War past, when Florida seceded from the United States of America, aligning itself with other southern slave-holding states in “the Confederacy,” with farmhands, ranchers, merchants and other men from local communities joining up with the Confederate army to fight for the southern cause.

But to many in Gadsden County’s majority black population, the enormous weight of Gadsden County’s stone Confederate Memorial hauled away last Thursday pales in comparison to the weight that – in nearly the same moment – was lifted off the shoulders of local African-Americans long forced to bear witness to what so many view as a symbol of hatred, serving little purpose other than glorifying a history when subjugated men and women were kept in iron shackles, forced to toil on local plantations for no compensation, even considered less than human by many of their wealthy masters. The weight of centuries of oppression. The weight of so much pain and struggle simply to be comfortable in one’s own skin in a blatantly prejudiced society.

The removal of Gadsden County’s Confederate Memorial is but a small, largely symbolic victory in a far greater fight for equality and respect – currently unfolding across the nation in the wake of George Floyd’s death. But small, symbolic or otherwise, the pivotal moment in local history didn’t come easily, even in Florida’s only majority-black county. For years, the classic “heritage versus hate” debate has raged in Gadsden County, as it has in towns across the U.S. – particularly the south. With local activists emboldened by the national Black Lives Matter movement emboldened and encouraged by similar Confederate monument removals elsewhere, perhaps Gadsden County’s most vocal, united call ever for the divisive courthouse monument to be 86’d began stirring over the past few weeks. Petitions were drawn up. Letters were penned. Ordinary men and women voiced their viewpoints at local government meetings.

Finally, this past Thursday, Gadsden County commissioners answered the community’s pleas in a historic special meeting, when by unanimous vote, the Board of County Commissioners ordered the courthouse Confederate memorial to be disassembled and carted away nearly 136 years to the day after it was first erected by the ladies of the Memorial Association of Gadsden County, dedicated on June 3, 1884 to Gadsden County soldiers who died in the American Civil War just a few decades prior. Within a half-hour of the vote, a crane crew arrived on the courthouse square and began disassembling the hulking stone pinnacle. A short time later, just an empty concrete pedestal was all that remained, with no tangible evidence of the Confederate memorial left behind.

According to Gadsden County Commissioner Brenda Holt, more than 4,000 signatures were gathered in support of the monument’s removal by local activists. Despite such passionate, overwhelming local endorsements for the courthouse lawn being sans Confederate symbolism,  commissioners acknowledged there was an equally passionate “other side” to the issue  – Gadsden County residents opposed to what is seen by some as an attempt to erase an important part of local history and/or the brave service of local soldiers, among other concerns. Petitions to keep the memorial were launched via social media, but none managed to garner more than 1,000 signatures. Still, because of many residents’ contrasting viewpoints, Commissioner Sherrie Taylor – though vocally pro-removal – insisted during the special meeting last Thursday that the matter be dealt with in a “respectable and honorable manner.”

“We are a small town and we certainly don’t want to cause destruction.” Commissioner Taylor said, adding she would like to see the old Confederate Memorial be replaced with a new monument that “represents everyone.”

The historical marker is currently being held in a safe, secure location, where it will remain until commissioners decide where to relocate it, county officials said.

Click links below to view additional shots of last week’s historic events, as captured by some of the men and women who lived them:

Photos and posts by local activist and educator Kevin Forehand

Published in Government and Quincy